Hampton’s French Department has 12 first-class teachers, two of whom are native speakers. We have all studied or worked in France for an extended period. We are also lucky enough to have two full-time French Assistants.

In our Department, we believe in the use of Target Language as often as possible so a typical French lesson is delivered in French wherever appropriate to create an authentic language environment in which the boys can practise and develop their skills, knowledge and understanding.

We benefit from an extensive range of authentic materials, magazines and books. Topical material is often sourced from the internet and the French press for AS and A Level teaching. Lower down the school, classes use a variety of software to support their work.

Boys wishing to read French at university – be it Oxford or Cambridge or elsewhere – are offered additional preparatory lessons in the Sixth Form.

The French Department offers a range of trips and exchanges and all boys are encouraged to participate.

Sixth Formers benefit from a work experience programme based in Northern France. Pupils are given a week’s work placement alongside French colleagues, enabling them to practise their language skills while gaining a valuable insight into the professional world in France.

There is a Sixth Form cultural weekend organised in one of the major cities in France. This is an opportunity to take in places of cultural interest and enjoy a play or sporting event.

We are fortunate to have strong links with one of the leading schools in France based in Paris, very close to the Jardin du Luxembourg. This exchange continues to attract many of our GCSE pupils each year.

The French department is also very proud of to be able to offer Second Year pupils the best possible opportunity to use their French in Provence through sporting and cultural activities. As well as being a valuable cultural and social experience, this trip provides the boys with a genuine opportunity to broaden their horizons away from home while making use of their French in an authentic and picturesque setting.

There is a weekly French Club for Fourth and Fifth Year boys where they can practise and reinforce their understanding of French through fun language activities. In Sixth Form, pupils are given the chance to see French plays and films in London under the School’s European Society. We regularly show films after school and touring theatre companies

For Fourth and Fifth Year boys there is a weekly French Club where they can practise and reinforce their understanding of French through fun language activities. Further up the School, boys are given the chance to see French plays and films in London under the auspices of the school’s European Society. We regularly show films after school, and touring theatre companies often put on French plays in School.

Every year our Sixth Formers take part in the regional French debating competition held at St Paul’s Girls’ School. This provides our Francophiles “en herbe” to surpass their fear of public speaking while building up their confidence, spontaneity and eloquence on hot and complex French topics. Hampton can be proud of producing some excellent French debaters as pupils reached the national finals held at the Institut Français two years in a row in recent years. We promote this life skill with our younger pupils to help with their spoken French. 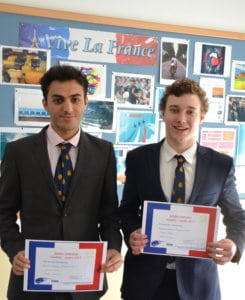 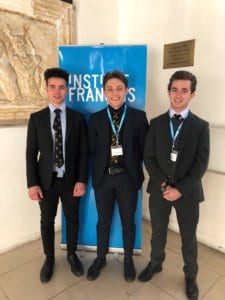