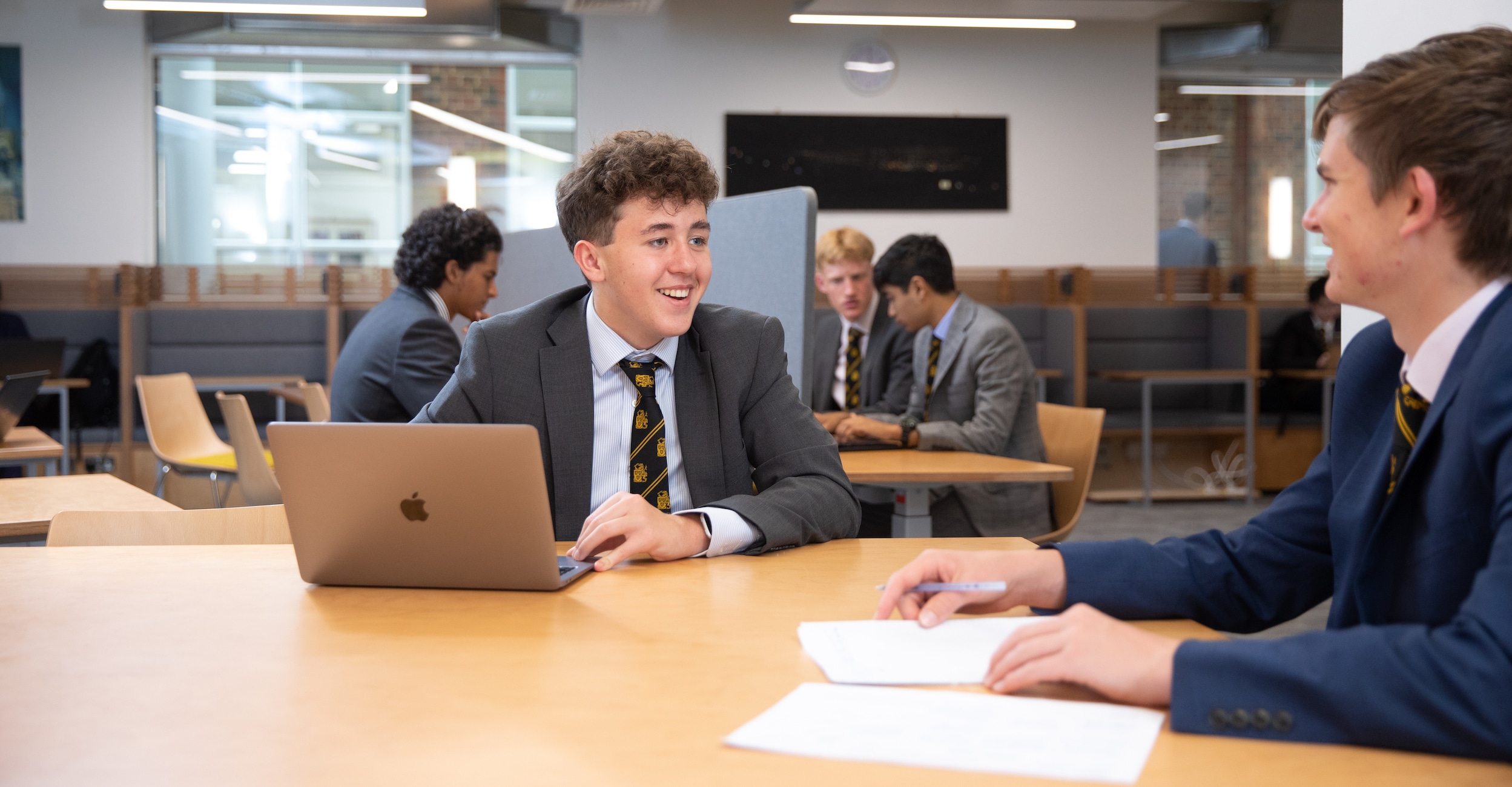 The Hampton School curriculum provides a broad, balanced and liberal education, providing our boys with a great deal of choice and the specialist preparation needed for further study. The curriculum is under continual review, and parents will be informed of any substantive changes.

In the First Year, we aim to provide boys with the opportunity to develop their skills in familiar subjects while also investigating areas which may be new to them. All pupils will undertake courses in Design and Engineering, Art and Music, as well as our innovative Computing and Coding course. Before joining Hampton, First Years will opt to study one of French, German or Spanish, which is then continued through to I/GCSE in the Fifth Year. All teaching is in mixed ability classes, although a small number of boys will go to one period of “extension” Maths during their timetabled Mathematics lessons.

First Year boys have timetabled PE and one afternoon (two periods) of Sport. In the autumn and spring terms, pupils can choose their sport from Rugby or Football, before choosing one from Athletics, Cricket and Tennis in the summer term.

Second Year boys continue with the Lower School curriculum established in their First Year. Drama is added to their timetable, ensuring they have experienced a wide range of subjects before making their Third Year option choices.

All boys in the Third Year take English, Mathematics, History, Geography, Religious Studies, Biology, Chemistry, Physics, Coding and Computing, PE, their initial Modern Language (for boys joining at 13+ this is usually their Common Entrance language) and PSHE. Three option subjects are offered to boys and they must all complete one of Art, Design and Engineering, Drama and Music, together with one of French, German, Spanish, Latin, Ancient Greek with Latin, Mandarin or Russian. Their third option can be any of these. All Third Year boys will have a two period Sports’ afternoon and Rowing becomes an option, which runs throughout the year.

Boys at Hampton study a combination of IGCSEs and GCSEs, with each department choosing the qualification which best allows the boys to achieve their potential in the Middle School and prepare for their Sixth Form careers.

All I/GCSE examinations are taken at the end of the Fifth Year (with the exception of boys taking Ancient Greek with Latin, where boys will take Latin in the Fourth Year and Ancient Greek in the Fifth Year). Each pupil studies ten I/GCSEs, comprised of seven core subjects (Biology, Chemistry, Physics, English Language, English Literature, Mathematics and their first choice Modern Language), and three option subjects. These will be taken from those subjects they have previously been given the choice to opt from, with the additional option of Ancient History. Fourth and Fifth Year boys will have a three period Sports’ afternoon.

The Sixth Form curriculum is designed to prepare the boys for university, while retaining the breadth in the curriculum, which we believe is so important. Boys prepare for A Level qualifications, taking four subjects in the Lower Sixth, three of which are taken to full A Level and examined at the end of the Upper Sixth.

All pupils also take part in our Curriculum Enrichment programme and Sport, which runs for three periods in the Sixth Form.

An appreciation of the importance of physical and mental wellbeing is at the heart of all we do at Hampton. Mindfulness is taught as part of the PSHE curriculum in the First Year, and through a timetabled lesson carousel in the Fourth Year. Mindfulness is also a compulsory part of our Lower Sixth Curriculum Enrichment course.

Hampton offers a wide range of subjects for boys to study in the Third Year.

For boys in the current Second Year at Hampton, please take a look at the publication below, which contains an overview of each subject:

For boys who joining the Third Year at Hampton in September, please take a look at the publication below, which contains an overview of each subject:

Hampton offers a wide range of subjects to study at GCSEs. The publication below contains an overview of each subject:

Hampton offers a wide range of study in the Sixth Form. The publication below contains an overview of each subject: