Wizard of Oz, Pens Down Day and Modern Languages Week!

Wizard of Oz, Pens Down Day and Modern Languages Week!

As we reach the close for this half term our First Years have had a week chocka-block full of exciting events. Watching the matinee performance of The Wizard of Oz, No Limits Week, Pens Down Day and the eagerly anticipated Inter-Form Football and Rugby Competitions. What a way to end the half term! All boys definitely deserve a well-earned rest next week!

WE’RE OFF TO SEE THE WIZARD…OF OZ

All First Year students had the amazing opportunity to watch the matinee performance of the eagerly anticipated Lower School Musical. Oli H reports:

After we had all taken our seats in the Hammond theatre, we enjoyed the first few songs like “Somewhere over the rainbow” and “Munchkinland” both were, like all the others superbly preformed and thoroughly enjoyed. After the interval the second half kicked off with a comedy scene outside the Great Oz’s palace which had us all laughing followed by more excellent songs like “Merry old land of Oz.” The play drew to an end with a dramatic performance of “Ding Dong the witch is dead”. It was a very impressive performance which we all enjoyed. Well done to all the staff and pupils of Hampton and Waldegrave school that were involved.

Some of our First Years have had an extra busy week and performing in the Musical every night, Mitul A, a lead Munchkin comments on his time on stage:

Being in the school musical is a fantastic experience. It’s nothing like my old school. The set is absolutely spectacular and the crew are amazing. We worked really hard over the past four months and it all paid off.

Read all about it and take a look at some of the photos: the wizard of oz

No Limits Week has been a huge success, our First Years have been getting into the spirit of the week and trying out lots of new clubs. Chemistry Club had a boom-ing increase in numbers of boys, fun and games were had at Board Games Club and the Sports Hall was jam-packed full of First Years trying out Table Tennis and Futsal. Hopefully this has enthused some of our First Years to try out some more new clubs and return next term full of enthusiasm for what lunchtimes have to offer.

Patrick T tells us about his experience:

A major highlight of this half term for the whole school is our Bi-annual ‘Pens Down Day’. It was lovely to hear the boys’ stories of all the fun things they did, they seemed to have a wonderful time and we are sure they are all looking forward to the next one!

The week after half term the First Years come back to an exciting inaugural Modern Languages Week. There will be several competitions being run during the week and some very exciting talks on sports journalism using other languages, a multilingual rock concert and a create your own language workshop! We’re all very excited for the fun start to the next half term.  Watch out for the posters around School for details of all the lunchtime talks and events that will be taking place!

A quick taster of just some of the fun activities to look forward to:

There are also events happening at lunchtime. Look out for the following:

The Modern Languages Department hope that this will make our first week back a little bit more special!

Congratulations to Zaid A who has been awarded Tutee of the Week for the continued kindness and helpfulness that Zaid displays to his fellow classmates and members of staff.

Our U12A, B and C Football teams had their work cut out for them last weekend, playing against strong sides from Dr Challoner’s Grammar School. Hampton left with a draw and a loss after some particularly challenging matches.

The U12A, B and C teams also had a tough weekend against St Benedict’s School, putting in a strong performance but it wasn’t quite strong enough, the A team managed to hold them to a draw!

Well done to all our Hamptonians who have represented the School in any sporting fixture this term, you have earned a well deserved rest this half term!

Are there any budding authors out there? Get your creative juices flowing over half term and put pen to paper! To enter, write a story opening of no more than 750 words and submit a printed version to the English Office by 9am on Thursday 27 February.

Have a listen to Second Year Adam’s entry from last year’s competition:

Fairly obvious when you think about it, it was incorrectly!

Keeping in theme with the Lower School Musical. 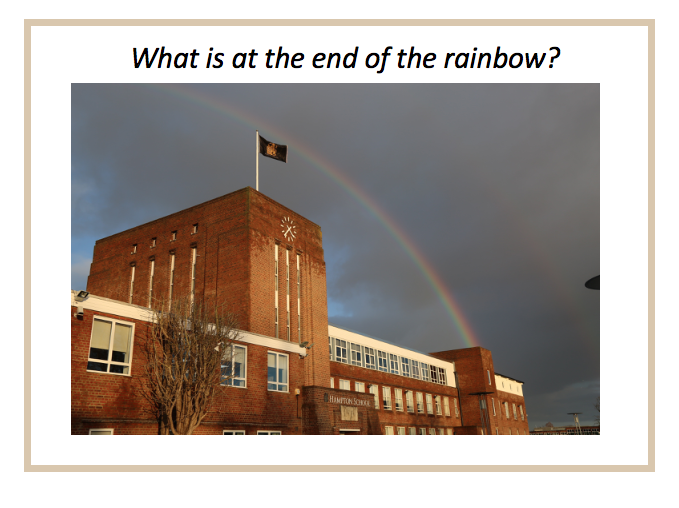 Have a great break!