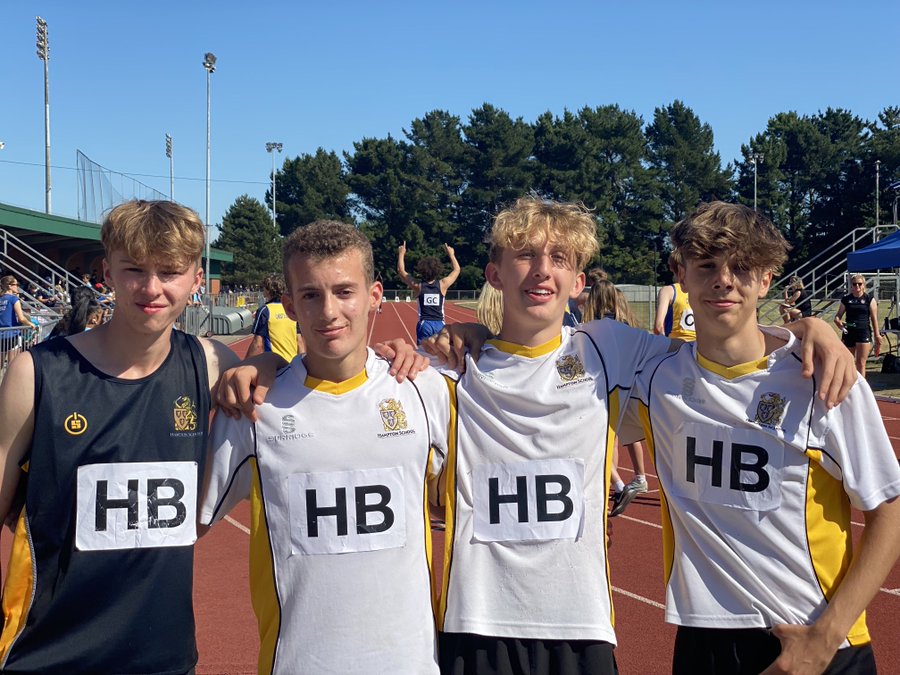 Hampton Athletes are having a fantastic 2022 season, with a series of strong performances at recent meets and the Richmond Borough Athletics competition proved no different.

First Year athletes finished third in the team competition with notable performances from Xavier Knowles, who won the 75m hurdles event, and teammate Ben Whitely coming a  close second in the 100m race.

The Second Years athletes went one better, finishing in second place with some impressive performances from across the team. Marcus Solomon powered home in the 1500m, with a time just outside the Borough record, and Fraser Kerr achieved two second place finishes in both the 200m and long jump events.

Fourth and Fifth Year Hamptonians joined forces to finish just six points behind the Grey Court team. Sprinter Nicolas Wojtylak-Herrero won the 100m in style and Aaron Mills finished first in his 400m event with another personal best time. Special mention must go to Kieran Bouwmeester-Reid who broke both the School and Borough record with an exceptional 1.88m in the high jump event, before returning to School to sit his Further Maths GCSE.

The relay events topped off an exciting day of athletics. The Second Year team finished strongly to take first place in their event, whilst the Third Year team of Daniel Mills, Sam Moylan-Jones, Quinn Schutter and Omar Khan also finished first with a new School and Borough record. Not to be outdone, the combined Fourth and Fifth Year relay team of Aaron Mills, Nick Lynagh, Jacob Austin and Nicolas Wojtylak-Herrero also finished first in their race, breaking the Borough record in the process.

Well done to all the Hampton athletes who took part in the Richmond event.