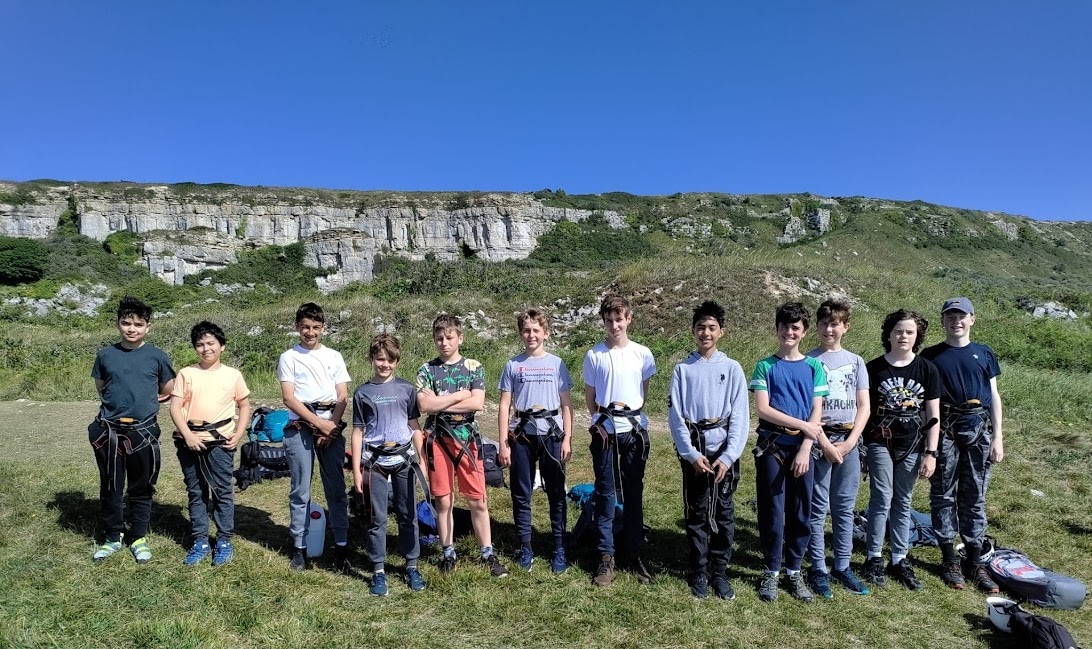 It has certainly felt very summery this week with the arrival of hot weather and the resultant change in uniform! This week we’ve got reports on the climbing trip over the weekend, and lots of sport!

A lot of fun was clearly had by everyone on the climbing trip over the weekend, thank you to Kanishk (2W) and James (2B) for sending us in these fantastic reports!!

On 10 June, four minibuses and a large van containing pupils and our bags, set off from Hampton. By 6pm, we had reached Portland, a small island off the Dorset coastline that is renowned for its rock and limestone, which is commonly used in Western European cities such as London and Paris (as we soon learned, courtesy of our generous instructor Jerome). We had a wholesome and fulfilling dinner of spaghetti and ice cream with raspberries. We were then introduced to our team leader Jerome who informed us about the types of climbing available in Portland. Later that evening, we completed a series of enjoyable team building activities including synchronised ‘cone tagging’, an innovative new game engineered by Jerome. After a refreshing night’s sleep (that was regularly interrupted by a leaking ceiling!), we ingested a cooked breakfast including sausages, bacon and baked beans, soon to embark on a long day of climbing, which included abseiling and climbing by the sea in the morning, and a medley of climbing walls in the afternoon. Returning to the ‘outdoor centre’, we yet again ingested additional nutritional supplements of fish with a baked potato and pancakes with whipped cream and chocolate sauce. The next day, we continued to climb at a seaside cliff venue in the morning, and in the ‘hidden valley’, a mysterious enclave in the hills from where no onlookers can see the valley, in the afternoon. After a short walk back to the vehicles, we departed for Hampton. Many thanks to our instructors at the Portland centre, including Jerome and Tom, our climbing instructors, and the teachers running the trip, including Mr Saul, Ms Czumaj, Mr LorI, and Mr Fuldner among others. By James (2B)

On the evening of 10 June, we departed for Portland, a 6 km long island off the coast of Dorset to have an adventure through the terrain. We left around 2:20pm to Portland, which was a two and a half hour drive down the M3. Around an hour in, we stopped at a service station to stretch our legs and buy lots of sweets! Prepped by this sugary fuel, we carried on our journey, and by 5pm, we had arrived. An interesting fact about Portland is that it includes a naval port, and so, if you look out at the port closely, you can see massive ships cruising around the dock. We were shown to a classical building, Victorian in style, with ammonite images adorning the ground level windows, this was the Portland outdoor centre. We unpacked our stuff under wooden bunkbeds and prepared for our first test, a fire drill. After a second attempt, we managed to successfully overcome the challenges of crossing a road. We were then rewarded with a dinner of pasta with cheese and berries with ice cream. The next day, we were split into two groups, group one would explore the East side of the island, and group two would explore the West. As part of group two, we were shown to a cliff’s edge and slowly made our way down a winding path, on one side the cliff and on the other side, thorny bushes. After making it to the bottom, we were split into two further groups, one would explore ‘The Block’ for the first half of the day and the second group would climb the cliffs further along the path. ‘The Block’ was an angled price of rock, jutting out of the cliff at a steep angle. After a few run throughs, in which a couple of people did stumble, we successfully went through all four of the climbing routes. There were mixed opinions when asked about which one was most difficult, but consensus was that route four, the one where the easiest way to climb up was to go to the side, was the hardest. After traversing our way down to the second activity, we were greeted with sunshine, a much-needed addition due to the severe wind chill. After finishing our lunch, we attempted the second course, a steeper formation with a few more grips. Most managed to do three of the four before the session ended but a couple of the groups got them all done! When we returned, we were greeted by a dinner of jacket potato with a fish fillet and veg, along with a pudding of… pancakes with all varieties of syrups and cream! Instead of their usual activities, we were allowed to watch the disappointing England game, whilst playing stumble guys. Sunday was our final day and we awoke to the smell of bacon. The breakfast for the two days resembled an English breakfast, excluding the tomatoes and mushrooms. Today, we made our way further down the cliff side, after a quick hike down, along with a couple of descents using ladders, we made it to our climbing position, a formidable cliff face with pockets of sharp flint stone. We managed to climb all but one course which one person fully completed while another got close. After a quick lunch, we arrived at our next climb, a lower, smoother course with a man-made castle of stone on one side and the howling winds on the other. After another run of successful climbing, we retreated behind the castle to relax, before leaving on our minibuses, to go back to Hampton. On the break at the service station, people bought McDonald’s burgers! It was a wonderful experience and I thank both the Portland Outdoor Climbing Centre and the Hampton climbing team for making this trip possible. By Kanishk (2W)

This Monday we played Ibstock Place school and the A, B and C team all came out victorious. For the U13A team, Freddie, who was opening for the first time, came and hit a great 63 which included two massive sixes and Aditya also contributed well with a good 52. In the end, we managed to get 180 from our 20 overs and tight bowling from Aarush and Dawood made sure that we sealed the win. The C team batted first, only losing three wickets in total. Rio retired after 30 runs, a fantastic achievement, and the team ended up 154-3 after 20 overs. After some strong bowling, the Cs got an early runout in the second over. The opponents had a very strong batter, but strong bowling from Hampton soon got him out, as well as a lot of his team. In the end, the C team came out on top, after the opponents only racked up 101-7 after 20 overs. By Ben and Akshat 2J

The athletes walked off the bus to an extremely hot morning at the Croydon athletics track. The event began and it got off to a great start, with Gabriel and Caspar putting in some great triple jumps. Also, in the high jump, Alessandro came a joint second with an amazing jump of 1.41m. All in all, the morning was full of incredible jumps and throws from the Second Year athletes and it resulted in the Hampton team leading the competition half way through. I was not able to see everybody’s events, but they all contributed to the completion and gained crucial points for the team. For the juniors (Year 8 pupils), the track events took place in the afternoon. To kickstart, Gabriel and Aiden took part in the hurdles, with a stunning performance by Aiden winning and Gabriel coming a close second, scoring great points for the team. The day was at its peak in terms of the temperature, so running was going to be a tough challenge for all Second Year athletes. High performers in the track events for the Second Year included Sooho Jin coming second in the 100m race, Harry Drewry winning the 300m convincingly and Balti Birts coming second in the 800m race. Overall, it was a brilliant day for all our athletes in Croydon, and it ended with a Hampton win for the Second Year in the whole competition. By Marcus (2B)

Our large group of rowers enjoyed a very pleasant afternoon on the river in the sunshine on Monday. In preparation for our end of term race scheduled for the last games session of term, the boys are making positive progress with their ability to row as a crew and limit the number of mistakes made. In the video clip you can see one of the octos nearly getting it right!

We also had a number of boys having a go at the single sculls and as a measure of the improvement from the whole squad, only three boys went for a dip (compared to eight last week).

Written by Lewis Carroll in 1895, Alice’s Adventures in Wonderland is a classic tale of a young girl named Alice, who on an ordinary afternoon, falls asleep in a meadow and dreams that she follows a White Rabbit down the rabbit hole. In our version, Alice, or should we call him ‘A’ discovered a website and falls deep within the virtual world. A has multiple levels to complete to win the game. We see A control various avatars as he adventures through the levels of wonderland meeting a myriad of characters whilst being constantly tormented by a virus called the Cheshire Cat. And what’s at the end of every video game? A boss level!

Join us on the 21 and 22 June to discover if Alex makes it to the final level and defeats the Red King. Tickets for pupils are free.

Book your tickets here (there will also be some free pupil tickets available on the door each night). 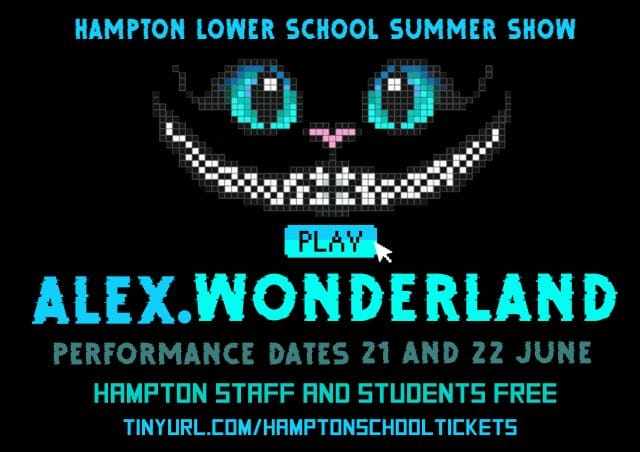 Welcome to the Weekly Questions! Every week, we’ll post ten general knowledge questions, and, if you have a go, you can be awarded a merit if you send your answers to Miss Kugele (r.kugele@hamptonschool.org.uk)! This week’s questions have been set by Joshua (2J)