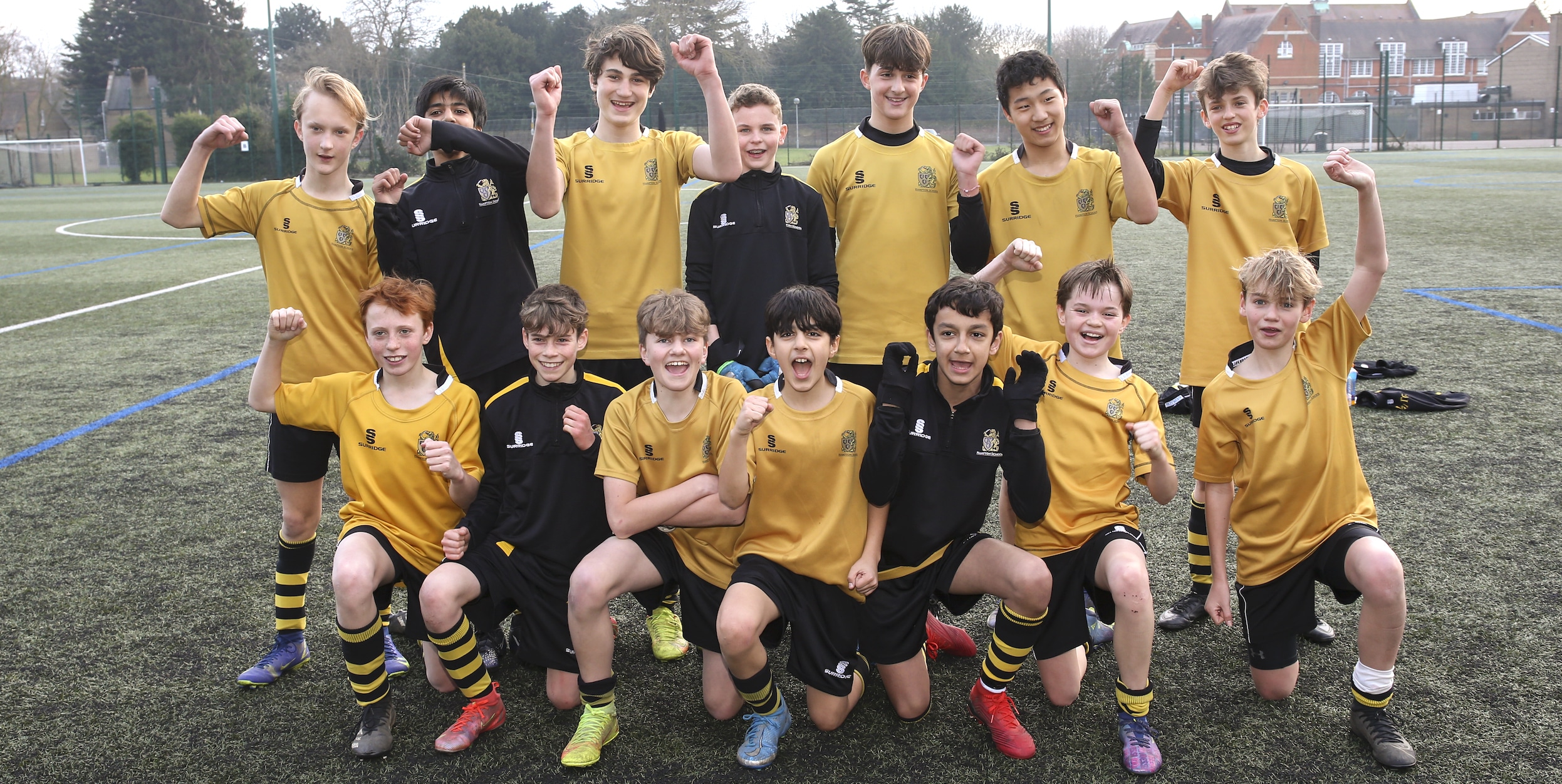 Following nine consecutive wins Hampton’s U13A team have made history, making it through to their respective English Schools’ Football Association (ESFA) Cup national final. They now face Chesterfield High School, Liverpool in the summer term for what will be a much-anticipated cup final.  Our U16Bs also make it through to their ESFA final after a strong performance at home in their semi-final match against Tunbridge Wells Grammar. 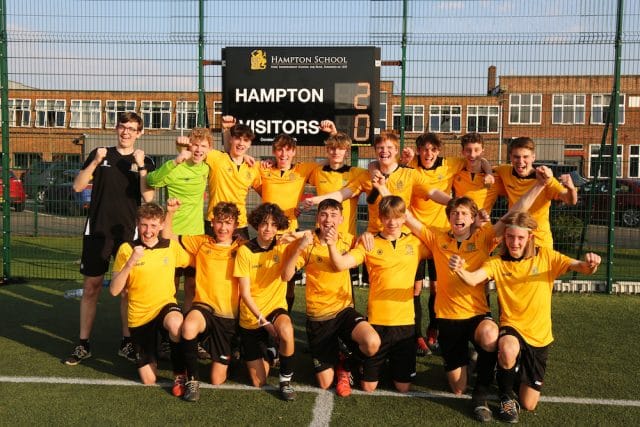 There have been close to 550 football matches across all ages and abilities this term.  Other highlights include our U12D’s 100% winning record over 19 games and ISFA semi-final appearances for our U13As and First XI. Our U16A and U14As are also through to their respective Surrey Cup final competitions.

The Rugby Sevens season culminated in some excellent performances for our First, U14s and U13s at the national Rossyln Park Festival. In other tournaments, the First VII won the Hampton Founders’ Day Plate as well as the Surrey VII’s Plate, and our Second VII won the Plate at the Halliford Floodlight VIIs.  Congratulations to our U15 VII on finishing runners-up at the John Pieroni VIIs hosted by Wimbledon College and the Warwick VIIs tournament. The U12s won the Bowl Final at Reigate Grammar School’s tournament, and the U16s brought home the Shield from the RGS Guildford VIIs. The U13 Sevens topped the group at the Surrey Festival while the U14 squad were victors at the Ibstock VIIs. 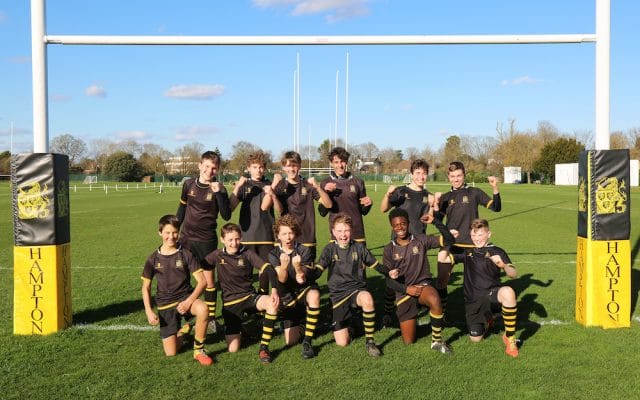 The Hampton Head, saw over 2,000 young rowers from across the country competing at what is one of the most prestigious and long-running events in the rowing calendar. Our oarsmen chalked up some great results with Captain of Boats, Jake Murray, finishing first in the J18 coxed four, along with James Radford, Jake Green, Alex Cresswell and cox Abhay Bahl, a feat matched by the J18 coxless four of Arjun Kang, Charlie May, Alex Duguid and Toby Gwynne. In the junior categories, there was also victory for the J14 octuple sculls and the J15 crew took Silver.

Six Hampton crews also turned in a strong performance at the Schools Head of the River Race, and at the Junior Sculling Head, our J15 Octuple took Silver medals and the J14 Octuple finished fourth in their race.

An unprecedented five Hamptonians were selected to compete in the 2022 Boat Race events this year including three taking up their position in the coxing seat. 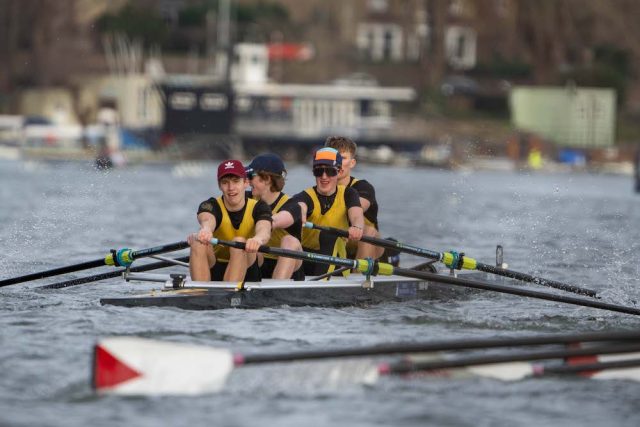 Hampton’s runners excelled at this year’s Middlesex Cross Country Championships, with Second Year athlete Marcus Solomon finishing well ahead of the rest of the field to win Gold in the U15 event. There were also strong performances from Fifth Year Freddie Bate, who finished fifth in the U17 race, and Sixth Former Henry Fagan, who completed the U19 event in ninth place. The three runners went on to represent Middlesex at the English Schools’ Cross Country Championships, where Marcus ran superbly to finish 13th out of a field of 330 runners in the U15 race 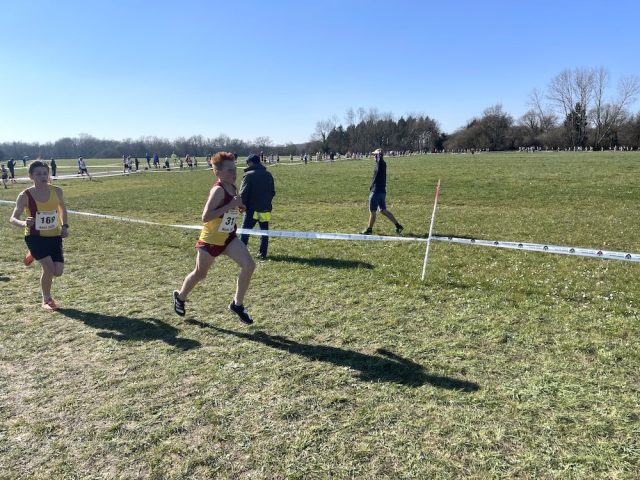