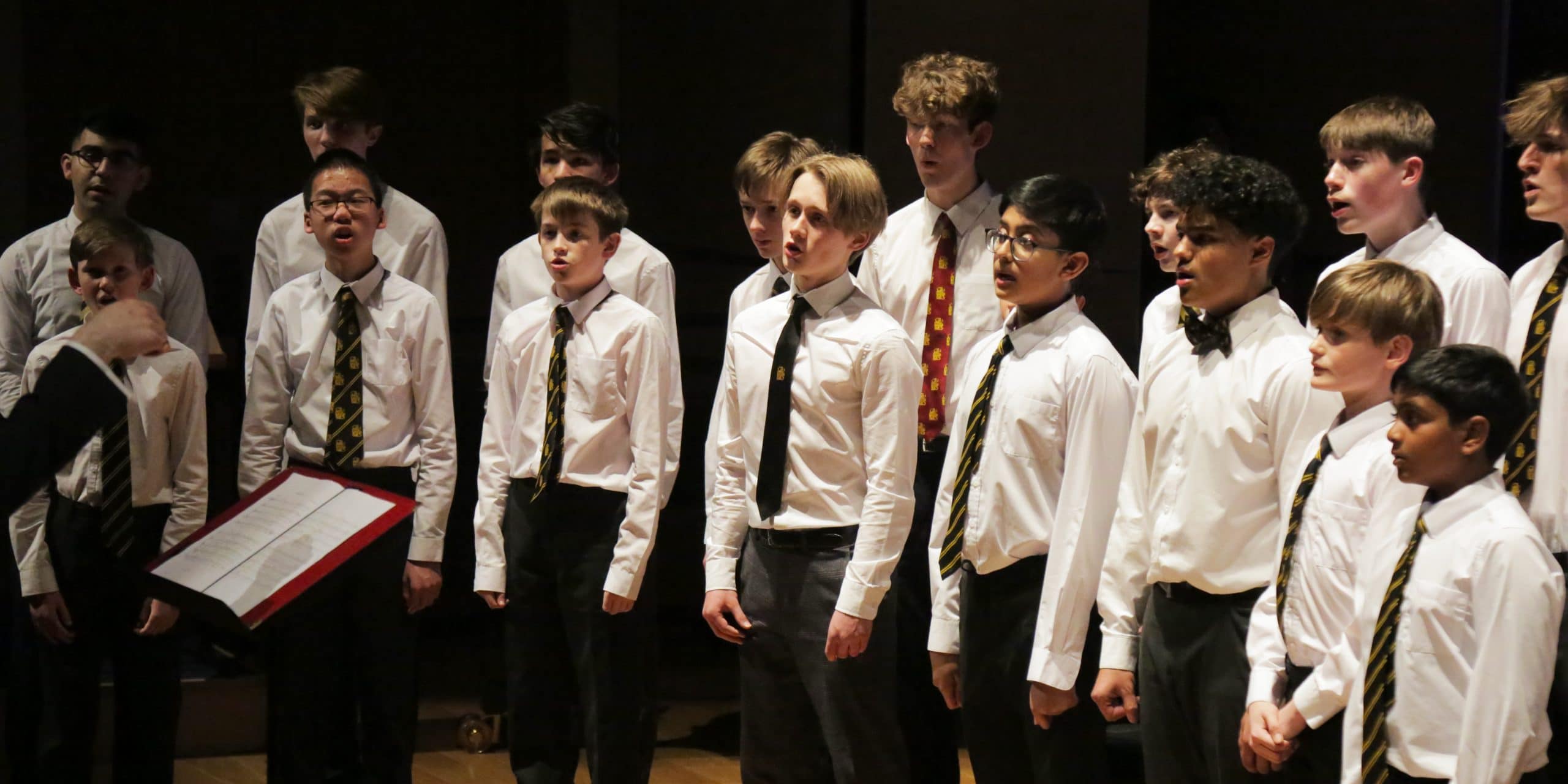 Hampton’s Music Department has run a hugely ambitious and successful programme of events and performances during the spring term, with musicians and choristers entertaining appreciative Hammond Theatre audiences at seven concerts across the term.

The annual January Rock Concert was bigger and better than ever, as musicians from across the year groups performed to a sell-out crowd. The concert showcased the wide range of musical talent, as musicians performed a mix of rock classics and original numbers, accompanied by dazzling visual and special effects. Amongst the many highlights was Alas, No Moore’s cover of AC/DC’s It’s a Long Way to the Top with an unforgettable bagpipes section from Upper Sixth Former Shane Bowden. 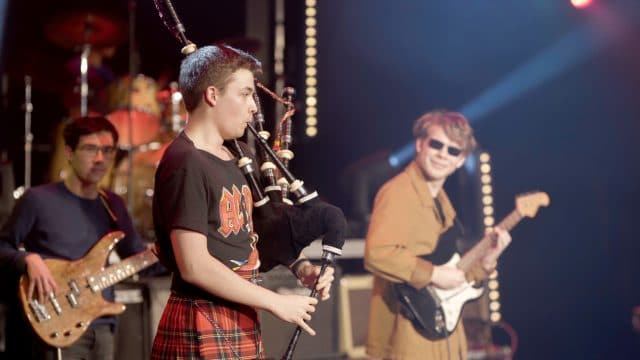 In February, piano teacher Mr Antonio Oyarzabal ran the Unsilenced concert which celebrated the music, poetry and stories of women composers, writers and poets who have been unfairly neglected throughout history. From the stunning second movement of Cécile Chaminade’s Trio No.2, for violin, cello and piano to the beautiful rendition of Sally Beamish’s In the Stillness by the Consort of Voices, the concert was a wonderful celebration of the works of female artists.

The Chamber Orchestra opened the String Concert with a vibrant rendition of Spring and Summer from Vivaldi’s The Four Seasons. Soloists from across the year groups played an eclectic range of pieces from the contemporary Despacito on the classical guitar to a Bach prelude on the cello. Sixth Formers Johnny Evans-Hutchison and Freddy Liang, accompanied by the Chamber Orchestra, brought the evening to a close showcasing the final Vivaldi concertos Autumn and Winter. 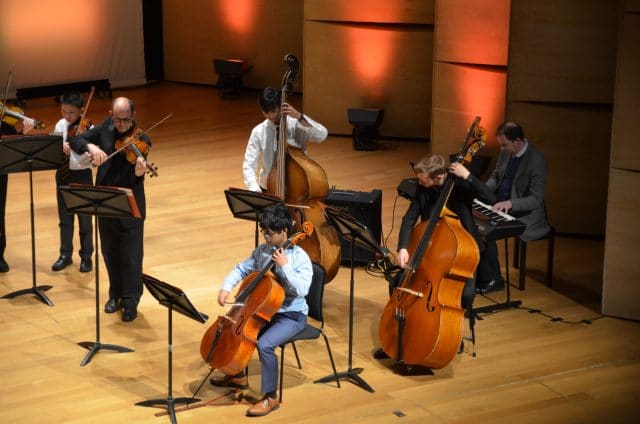 The Chamber Concert was packed with chamber music, from piano trios, to string quartets and wind quintets. The Lower String Ensemble performed for the very first time, proving that the musical future of the School is in secure hands with such a wealth of talented young musicians.

The annual Jazz Café was a vibrant evening with entertainment provided by the Swing Band and Jazz Band, alongside smaller ensembles comprised of our senior musicians. With three hours of continuous live music, the packed audience enjoyed an eclectic range of jazz from Duke Ellington to the Average White Band. 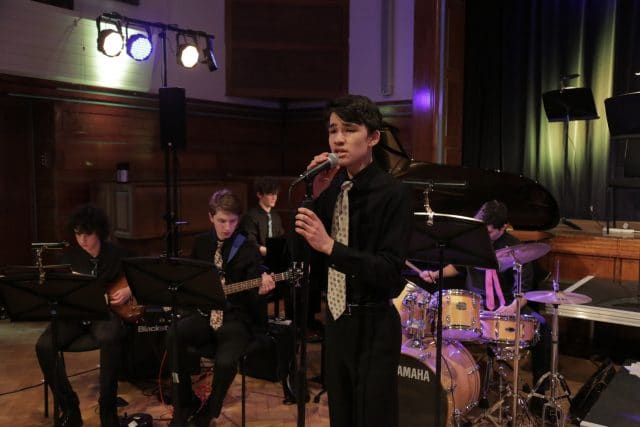 The 2022 joint Hampton and Lady Eleanor Holles (LEH) Choral Society Concert, involved over 40 Hampton pupils plus many staff and parents. The 150-strong choir, accompanied by a full orchestra, performed the finale of Mahler’s Symphony No.2, a Shakespearean cantata by LEH composer-in-residence Mr Brendan Ashe, and Handel’s Zadok the Priest.

The term culminated with the Spring Concert, which celebrated the world of film music and included over 170 musicians and choristers entertaining family and friends on the Hammond Theatre stage. Our ensembles and choirs performed a selection of film classics, from the Symphony Orchestra’s spine-tingling performance of the theme from Jurassic Park to Voices of Lions‘ lively rendition of Aladdin’s Friend Like Me. A highlight of the evening was Upper Sixth pianist Daniel Morgan’s impressive performance of a movement from Shostakovich’s piano concerto No.1, superbly accompanied by the Symphony Orchestra. 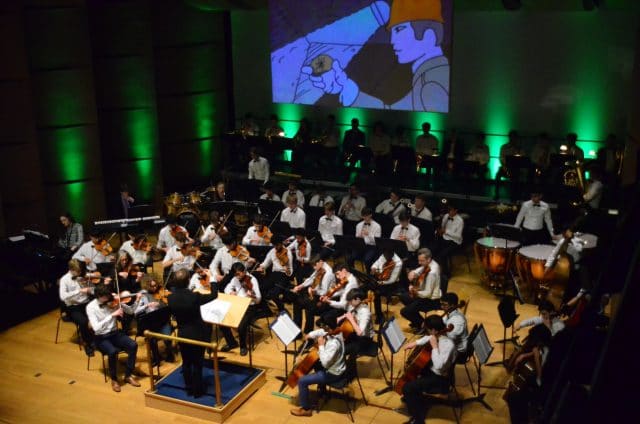