I can’t believe we’ve made it to the end of our first half term; it has gone by so quickly! Well done on such a fantastic start to your Second Year; it has been wonderful to see so many of you enjoying all that Hampton has to offer both inside and outside of the classroom again. Enjoy a really well-deserved break with your families!

Our weekly interviews, are a great opportunity for you to find found out a little bit more about your Tutors! So, thank you to Aditya and Joshua (2B) who interviewed Mr McTernan; Classics Teacher and 2B’s tutor!

How long have you been working at Hampton School? 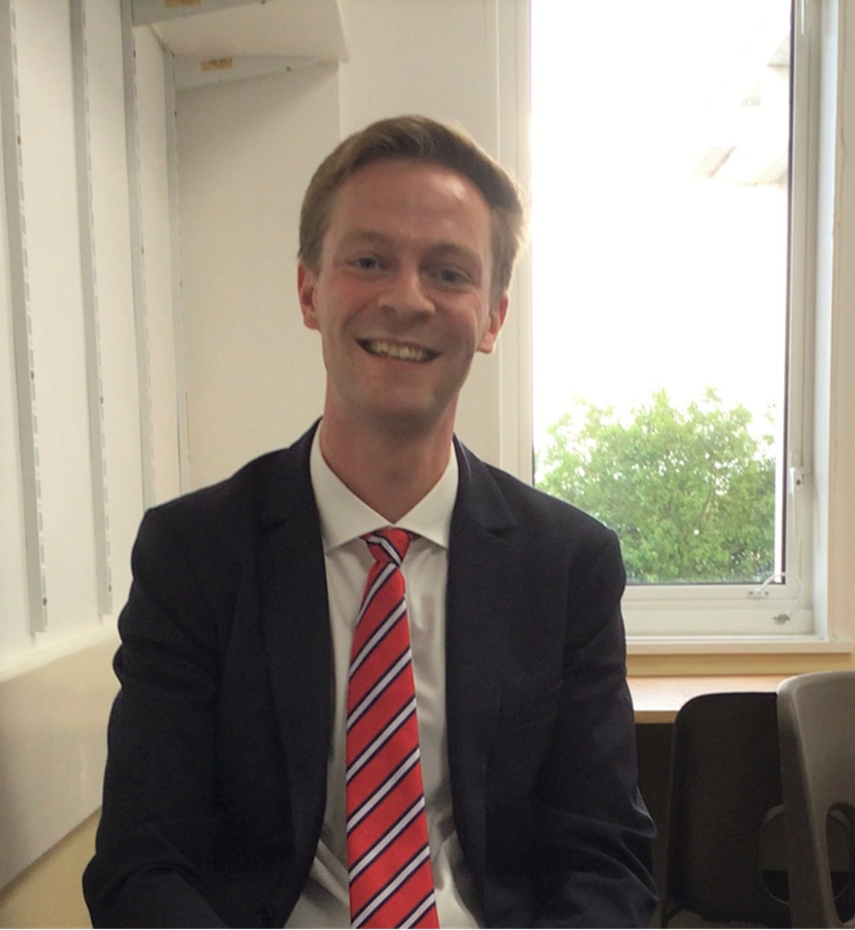 I have been working at Hampton since September 2019.

What parts of Classics do you teach?

I teach Latin, Greek and Ancient History and I teach a wide variety of year groups. This year I am teaching from the Second Year to the Upper Sixth.

How long have you been a form tutor for?

The same amount of time I have been at Hampton School. I spent two years as a Third Year Form Tutor before becoming a Second Year tutor.

My favourite story is called Baucis and Philemon. It is not a very well known myth and is told in the Metamorphoses by a Roman Poet called Ovid. Baucis and Philemon are a very old couple who have a very humble house and very little money and possessions but they welcome two travellers who need a meal and somewhere to sleep. Baucis and Philemon offered these travellers all they had. These two travellers are actually Jupiter and Mercury in disguise and they reveal themselves and honour the old couple by turning them into two trees that stand next to each other forever and so they are never separated. It is a really sweet tale and it reminds me of the generosity of my Irish grandparents.

What is your favourite part about teaching?

I love the variety it brings, I like teaching First Years about Caecilius one minute, and then the next minute teaching Sixth Formers about battles in Greek history. I also then go out onto the fields and I coach football, tennis and running.

That’s a tough one, I love both, Latin is very neat and concise and it uses very few words compared to English. Greek is a bit wordier than English but it is a really fun challenge if you like Latin. Every Second Year can look forward to a Greek ‘taster’ in their Latin lessons after Christmas, and the alphabet is actually really easy to learn which will only take one or two lessons to master.

Kanishk (2W) takes us on another journey back in time as we learn that Hampton School hasn’t always been based in its current loation.

In 1828, the School was separated into lower (or English) and upper (or Latin) departments, each under a different master. The schools were initially housed together in a room. However, in 1830, the Latin department moved to another building in Upper Sunbury Road. The site had come with a field stretching onto the river to compensate the loss of tithes following 1811. Much of the field was sold, but the land north of the road was kept.

However, for a variety of reasons from demographics to staffing fees meant the School now had to charge fees. Therefore, in 1910, the School became Hampton Grammar School. A name still used by the older residents. However, the building and site were too constrictive and so in 1939, the School moved for the last time to Hanworth Road, where it remains today. The land here had also come with rectory tithes and so some of this land, not needed by the School was sold to Lady Eleanor Holles School and to Hampton High, this is why three schools lie on Hanworth Road today.

In line with voluntary aided status, Hampton Grammar School relied on the Local Education Authority to provide furniture and equipment. But its governors were responsible for the general education of the school. However, when the council envisioned the removal of Sixth Forms for higher level colleges, Hampton School reverted to Independence in 1975. Since then it has continued to grow and flourish and we hope it shall carry on its legacy for years to come.

Last Tuesday, it was LIGHTS, CAMERA, AND ACTION for the dress rehearsal of the LEH and Hampton’ Senior School Musical: Guys and Dolls. We, the Second Year, got exclusive tickets to the dress rehearsal, in the Hammond Theatre. Set in the early 20th century, in bustling New York, Nathan Detroit ran an illegal gambling game, on the streets of Broadway. His fiancée of 14 years wanted to get married to him. Meanwhile, he gambled that Sky Masterson, a fellow gambler, could not persuade Sarah Brown, who was part of the local Save our Souls campaign, to go to Havana, in Cuba, for a date with him. And as the story unfolds, Sky Masterson is able to persuade Sarah Brown for a date, only if he brought a dozen sinners along to the Save our Souls meeting. Thank you to all of the actors, actresses, production team, orchestra and teachers involved for such a great piece of theatre! By Joshua (2J) 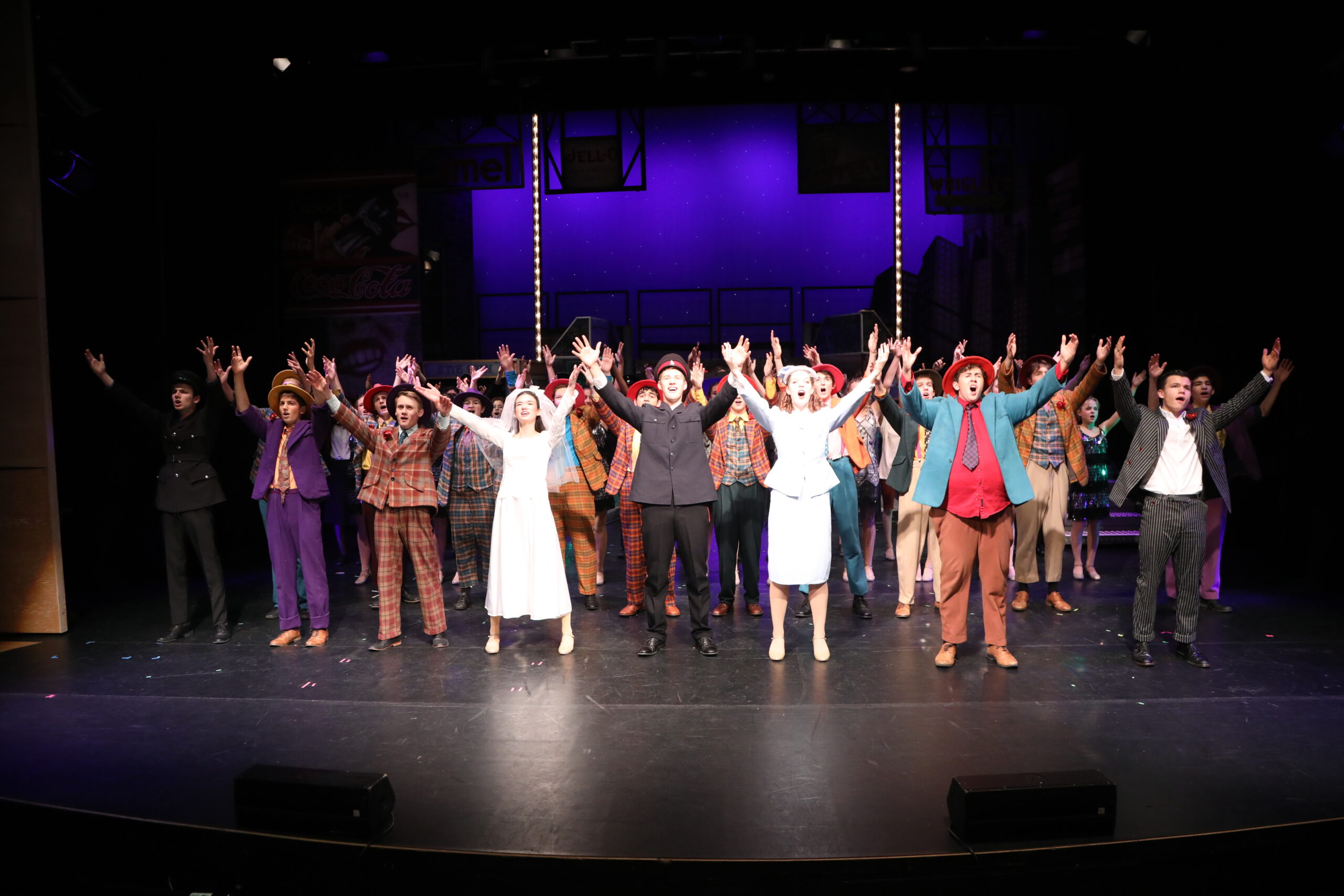 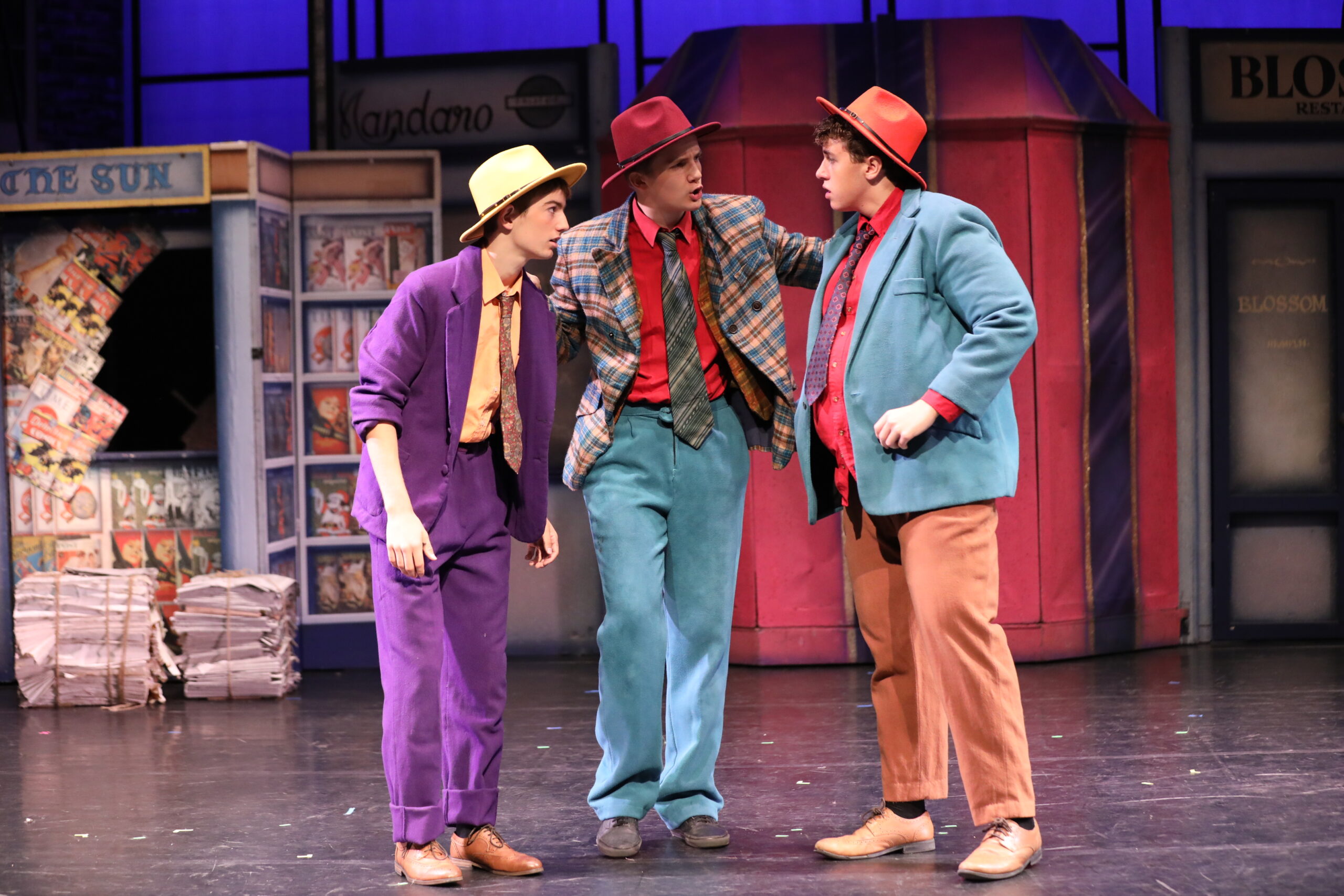 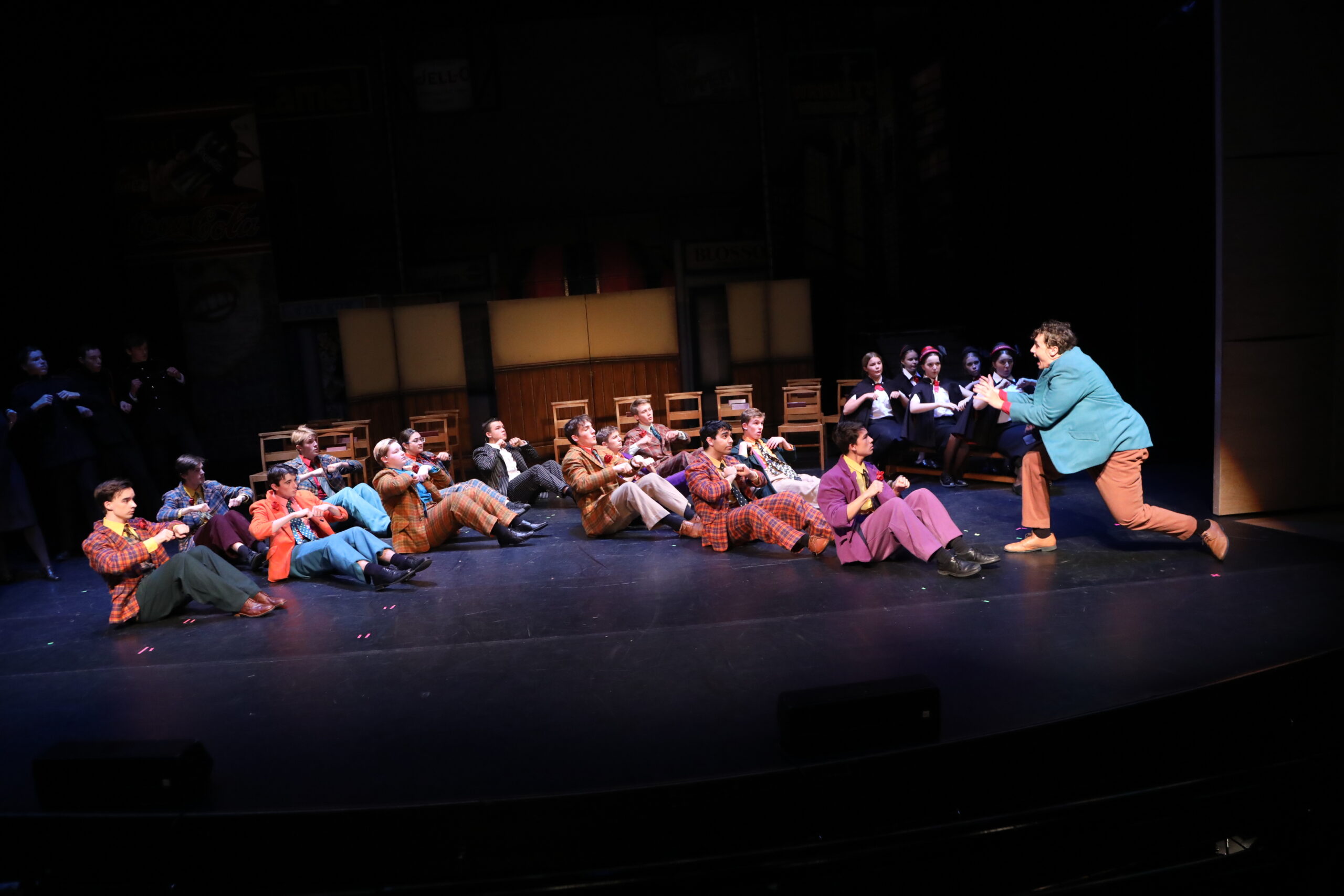 Get prepared for a great play by the Fourth Years and above from both LEH and Hampton school. Guys and Dolls is here. It is a fun play based in New York back in the 1900s. The Second Years had a great time watching Guys and Dolls on Monday. Guys and Dolls had great music by the musicians and the incredible acting and singing by the actors in Hampton and LEH doing a great job  It is really great and the price for a ticket is only £12 for a really good play. Enjoy it! By Lucas (2P)

Last week, the Hampton boys were extremely lucky to have a fantastic biology week with a wildlife photography talking about the fear and the fight or flight situation when encountered with a wild animal and that before you fight or flight that you freeze to take that decision. The Second Years were in the Lecture Yheatre listening to the talk while unfortunately the rest of the School joined on MS teams live from their classrooms. Additionally, the beekeeping club sold out of the many honeypots produced straight from the Hampton beehives. I must say it does taste fantastic on toast on a Monday morning! By Omer (2F)

IN CHEMISTRY THIS WEEK

This week in Chemistry we started our new topic on acids and alkalis. We made a universal indicator using red cabbage and then tested different substances.

The substances we tested were: Sodium hydroxide, hydrochloric acid, grapefruit juice and water. We mixed the liquid of the red cabbage and mixed it with each substance to see what colour the final product would be and with that we determined if it was an acid, alkali or neutral. It was really. By Aditya (2B) and Joshua (2B)

After sneaking quietly out of the theatre midway through the first live production of Guys and Dolls (with permission of course), the under 13As jumped on the coach, ready for the one-hour coach drive which would take them to the area where their second round ESFA cup tie would be held. In the absence of the As, the Cs and Ds were facing up to the tricky task of playing the Radnor House As and Bs- read more about their fixtures in Ben Bates’ match report. Meanwhile, the As kicked off against Carshalton Boys Sport College filled with confidence after their comprehensive 6-0 victory against Forest School in the opening round of ESFA. Carshalton would prove to be trickier opponents, however. A well-organised side, they worked very hard and fought till the end, giving Hampton a run for their money – indeed despite a brace from Marcus Solomon and a typically well-taken goal from Rio Felonov-Tzanev, the score line read 3-3 at full time, with a late equaliser from the hosts. The Second Year Hamptonians showed tremendous spirit however, and even when they went 4-3 down in extra time their resilience shone through, as Felix Burt scored a long-range rocket to level the game before Felonov-Tzanev scored a last-minute winner. This late goal ensured that the U13As would be going through to the third round of ESFA, although they felt somewhat unlucky to come up against such a formidable opponent at such an early stage. Nevertheless, a job well done and the team go marching on in the competition. By Alex (2F)

On Monday, the U13C and D football teams played against smaller school Radnor House’s As and Bs. Kick-off was at 2:50, and after an hour of football, the D team came away with an emphatic 7-0 victory against Radnor’s Bs, with goals from Teddy Hart, Patrick Moroney, Nathaniel Chukwu, Arish Kesavan, myself, and a brace from Dylan McNamara. The D-Team dominated possession, and were on the front foot from the start, and soon after Dylan put one past the keeper from the penalty spot. At half-time, it was 3-0, and, after a bit of possession loss in the early second half, Hampton got right back into it, scoring two in quick succession, from Arish and Patrick. Unfortunately, the C team came away from a 9-1 loss, with the only home goal from Yuvraj Sahota. However, both home sides came away from the match with their heads held high, and it was a great opportunity for some E team players to experience some D-Team match play. Thank you to Radnor House for coming down and playing, and well done to all the boys who played. By Ben (2J)

This week in the news, The Photo of The Year Award for 2021 was given out and the winner was a picture of a leaping fish passing the mist of a full moon, taken by photographer Laurent Ballesta.

In more bizarre news, giant snails in Florida are taking over some resident’s homes by eating them, yes, eating them! Thankfully, after a small $24,000,000 dollars of funding and 20 hours of work, they should be gone for now.

In sports, England are all but qualified for next winter’s Football World Cup after a lacklustre 1-1 against Hungary at Wembley. There was fighting between Hungary fans and the stewards and police, but thankfully, arrests were made after the game. By Akshat (2J)

The English department are very excited to be launching ‘The Writers’ Room’, which will be opening its doors to all those interested in creative writing after half term.

In the first week back, all pupils are invited to attend a creative writing taster session in Room 53, in the English Department.

Following this, Hamptonians can sign up to a series of four-week courses, which will be held over lunchtimes throughout the year.

Second Years should come along on Wednesday 3 November at 12.35 – 1.10pm (please note that the taster session time is slightly different to the poster)

The first four-week creative writing coursewill start the week after the taster session. All are very welcome to come along!

Any questions, please see Mrs McLusky in the English Office.

Welcome to the Weekly Questions! Every week, we’ll post 10 general knowledge questions, and, if you have a go, you can be awarded a merit if you send your answers to Miss Kugele (r.kugele@hamptonschool.org.uk)! This week’s geography themed questions have been set by Ameya M and Aarush J (2J)