The sun has come out on our first week of this half term, and the First Years have returned with similar cheer, and got stuck into online learning with their usual dedication and enthusiasm. The boys had a timely and informative assembly on E-Safety by Peter Cowley, in which they received lots of useful tips and advice for staying safe online and managing their online profile. This week also brought welcome news of the proposed return to schools from Monday 8 March, and we are sure the boys are looking forward to getting back to the School site as much as us!

A reminder of all the things going on outside of lesson time – there’s lots to get involved with, so do go and have a look at them on Firefly or the Hampton@Home newsletter!

There are also 2 lunchtime clubs on offer to First Year boys:

This week, I interviewed Oliver B who is the mentor for Form 1J.

We make a living by what we get;

we make a life by what we give.

What do you enjoy most about being a mentor?

I enjoy working with younger pupils; it’s nice to invite them into Hampton and help them to make themselves at home.

What is the hardest aspect of being a mentor?

That’s a good question; I suppose trying to get to know and speak to everyone in the form can be hard, as there are some that speak a lot, and some that are quiet, so it can be tricky to bring the quieter boys out of their shell.

What are some random facts about you?

I used to live in Qatar when I was younger.

Maths or English, which do you prefer?

What are your key strengths as a mentor?

I think that I’m good at getting to know people, and helping them to feel good about themselves.

How do you stay organised?

I think it’s important to write down what you’re doing to do and when you’re going to do it, e.g. in a diary, and I try to do homework on the day it’s set, to keep on top of things.

If you were able to supervise a club, what would it be?

I think trying to find motivation to do things, as it’s really easy to sit and watch TV. It can be hard to get out and do some exercise, or do some work sometimes.

What’s the most spontaneous thing you’ve ever done?

What subjects are you studying for A Level?

1J are studying the Peasants’ Revolt. During their History lesson this week they shared speeches they had written addressed to King Richard II. They clearly explained their grievances about the 1381 poll tax. The speeches were filled with passion and historical detail – brought to life by being in character too!

With just over half of the year gone, the standings for the First Year Inter-Form cup are below. There will be plenty of events that go towards the Inter-Form cup throughout the year, so get involved; remember that the entries to the First Year lockdown Olympics earn points for your form!

Well done to all who submitted entries for our First Year blanket Fort Challenge this week; there have been some really creative entries!

This week’s challenge is a football-related one; how many keepy-uppies with a toilet roll can you do? Take a look at the video below to see how Mr Burke got on:

Take a video/photo of yourself doing the challenge, and submit it with the number of keepy-uppies you managed!

First Year boys will be introduced to the delights of the culinary world as ‘Cooking Week’ begins on Monday! Let’s hear from Mrs Halford and Mr Hill who tell us more about it:

We are looking forward to seeing video and photograph evidence of the tasty dishes that you all produce!

We know how many of you enjoyed the recent Thursday Night In ‘Nacho Night’ with Head Chef Paulie. Lots of you cooked along and made some delicious posh nachos – so, are you ready for another one?

Get prepared to rustle up a classic homemade beef burger + toppings, alongside a delicious halloumi burger with grilled vegetables!  Chef Paulie will be ably assisted by some brave Hampton teachers – with varying degrees of culinary expertise!

Book here for Thursday Night In on 4 March at 7pm.

The ingredients and equipment list is attached below so you’ve got plenty of time to get ready. No previous cookery experience required so everyone can get involved – First Years through to grandparents! 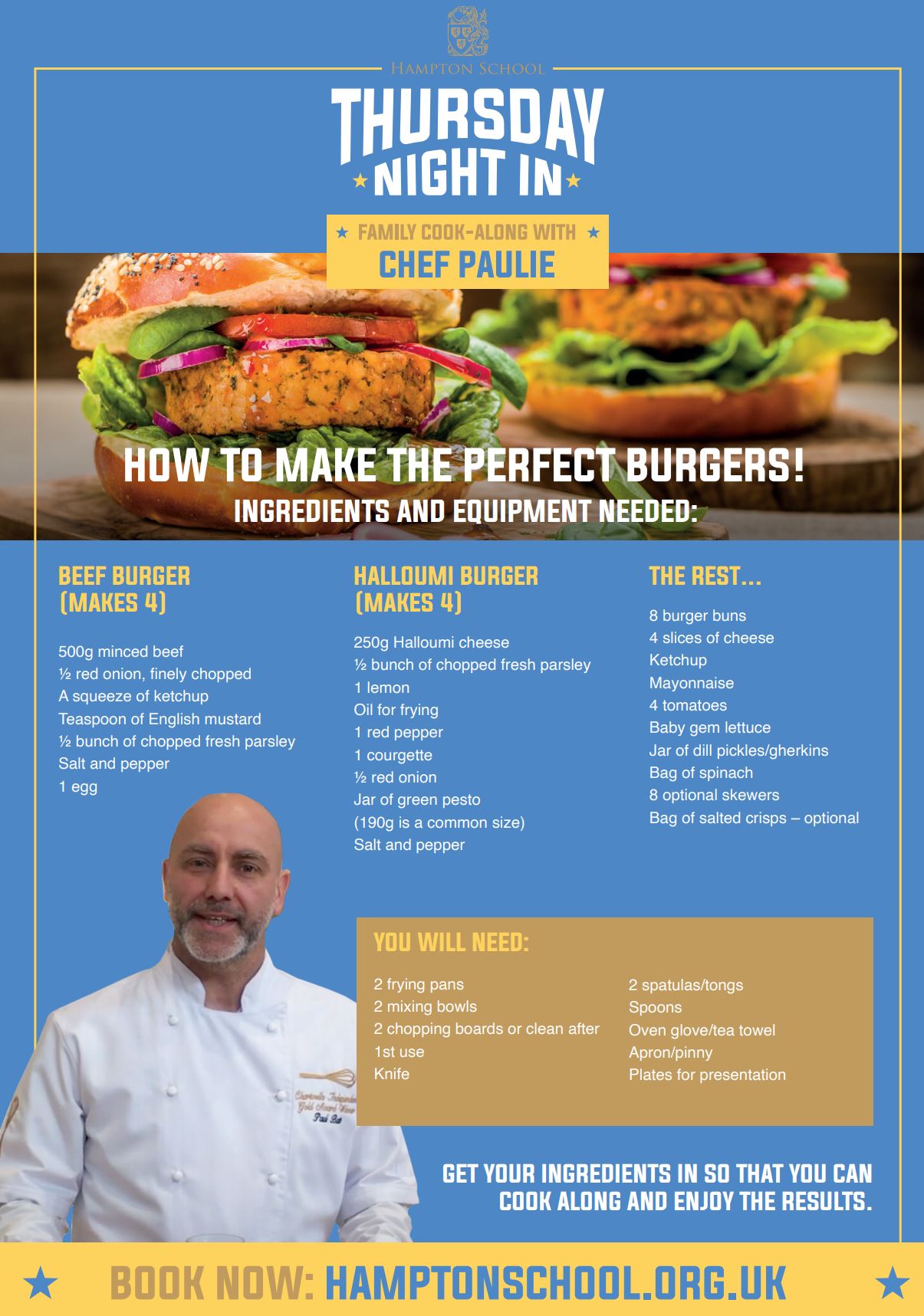 There’s still time to get your entry in for this year’s Creative Writing Awards! The deadline is Monday 1 March. So, if you have some spare time this weekend and have always fancied seeing your work in print, then why not give it a go?

To enter, write a short action adventure story of no more than 1,000 words and email your entry to CreativeWritingAwards2021@hamptonschool.org.uk.

Kanishk M (1W) continues his exploration of the history of ancient empires by going east to look at the Japanese kingdom of the Tokugawa.

After hundreds of years as warring states, families slowly got control of their regions in Japan. Eventually, most of the country went into the leading family at the time, the Tokugawa. Who eventually established the shogunate. The first Tokugawa to take power was leyasu after the death of one of the main unifiers of Japan, Toyotomi Hideyoshi. In 1603, leyasu convinced the emperor, who was something of a figurehead, to grant him the power of shogun. For the next 260 years or so, the Tokugawa bakufu was the main government of Japan. The primary virtue of this government was not necessarily its efficiency or its forward-thinking politics, it was its stability. Stability: the most underrated and yet important of the governmental virtues.

The Tokugawa bakufu wasn’t much for centralisation as power was mainly in the hands of local lords called daimyo. One odd feature of the Tokugawa era was the presence of a class of warriors who by the nineteenth century had mostly become bureaucrats. You may have heard of them: the samurai. One of the things that made this hereditary class so interesting was that each samurai was entitled to an annual salary from the daimyo called a stipend. This basic privilege basically paid them off and they didn’t become restless warriors, plaguing the countryside – that is, bandits. We tend to think of samurai as noble and honourable, but urban samurai were a rough and tumble lot. Samurai gang wars in the shadows of the emperor’s castle were frequent in the early 1600s. The central Bakufu had trouble controlling the more powerful daimyo, who were able to build up their own strength because of their control over local resources. This poor control also made it really difficult to collect taxes so the Tokugawa were already on their ropes when two foreign events rocked Japan. The first was China’s humiliating defeat in the opium wars, after which Western Europeans forced China to give them special trade privileges. It was a wake-up call to see dominant power in the region so humbled. But worst of all was the arrival of Matthew Perry, an American Captain who opened Japan’s borders in a similar way in which they had done in China. Soon after, the angry samurai and daimyo gave the Tokugawa the boot. The Tokugawa attempted to escape Japan, and we haven’t heard a word from them since.

We had an impressive 43 entries for the 5 questions last week, 1B are in the lead this week  with 10 submissions! Well done to the following boys (make sure to add your merits in the back of your homework diaries and to collect your merit certificates when you reach 10!):