As we finish the first term at Hampton for our First Years the corridors have been full of festive fun! With Hampton’s 12 Days of Christmas a storming success, our First Years have been reflecting on their time here since September. We have seen them adapt to learning through a pandemic at School and could not be prouder of how well they have applied themselves to the challenges Hampton has thrown at them. From navigating their way around the large site to throwing themselves into all co-curricular activities – they have become fully fledged Hamptonians.

Finally! The end of term is getting so close!!! Friday will be our last day and it will be a half day and a Mufti day. After, we have a very long break! Our first term in Hampton has been a great one so I will summarise it and show a few highlights.

The first day of the entire term: The first day was a day that made many quite nervous! On the first day, we got to know each other and our forms tutors and also learnt a bit about life in Hampton.

Team building: On this day, we got to wear Mufti and for half the day we did fun activities with our classmates to make new friends we also did this a few days before Avon Tyrrell.

Avon Tyrrell: This was another great day where we did really fun activities! It was a very long bus trip with most pupils playing cards against each other but once we did arrive…. We were sorted into our own teams and then we started doing the activities!

The last day of the first half term: This was an exciting day as many of us were quite tired and happy to have a break.

Second half term: After the half term break, we were back at school and we were ready to learn a lot more!

Anti-bullying week: This was another important day (or week!) where we had special assemblies looking at the topic.

No homework week!: This week, we had absolutely no homework at all! It was awesome!

Twelve days of Christmas: In this we did different activities each different day which usually involved donating to the Felton food bank!

Have a great Christmas and a break and a happy new year!

Biology is the science

Evolution is the concept that makes biology unique

Where did you graduate from?

I graduated from the University of Glasgow and I did Zoology there. 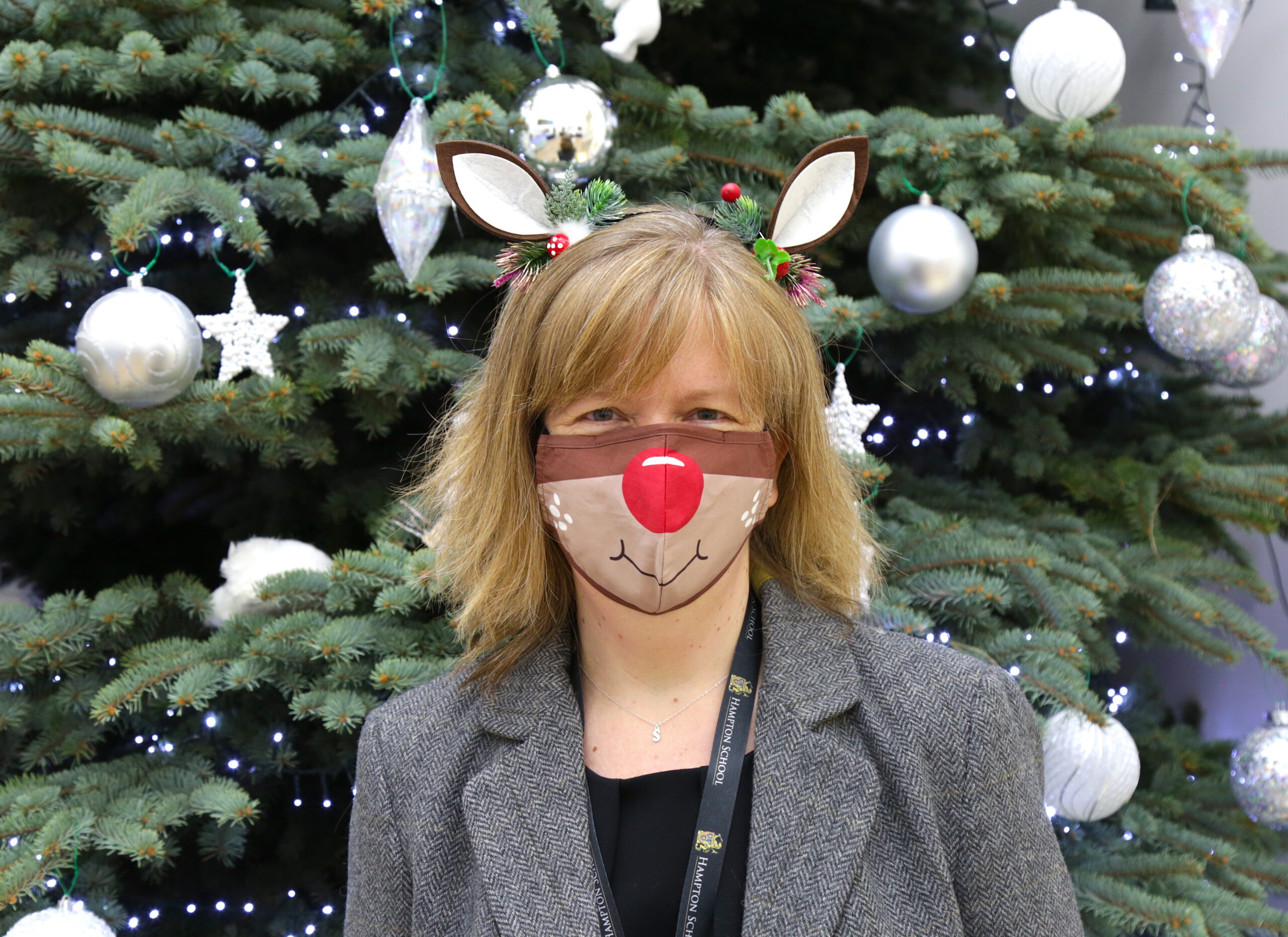 What are your strong points as a Deputy Head?

Hopefully, to be organised, hard working and approachable.

How would you settle a pupil if they are unhappy or lost?

I would get them to sit down and would give them time to collect themselves. I would also ask some questions if they’re comfortable with that.

What is the best thing about Hampton which you haven’t experienced in any other school?

The collegiality, friendliness and energy.

Which activities most engage pupils here at Hampton with their learning?

To engage learners at Hampton, I would say something active and something where they have to think for themselves.

What approaches have led to Hampton pupils making the most progress?

It is probably the high expectations of the teachers and of themselves.

How do you integrate technology into classes and the curriculum?

Personally, I try use a mix of online activities plus OneNote for note taking. Also, I like to use online animations as it helps for pupils to understand the concept a bit better.

I would like to see colours because insects see the world in a completely different way. I would love to see their world. And smells could be horrible.

Time for some Christmas jokes

What do Santa’s little helpers learn at school?

Why did Santa’s helper visit the doctor?

He had a low elf esteem.

Our Germanists in 1P have been discovering all about Christmas traditions in Germany this week. They’ve created colourful paper shoes, which they hope that St Nicholas will come and fill with Christmas goodies. Fingers crossed!

Kanishk M tells us a little bit about the legend of mistletoe:

The hanging of the mistletoe.

Why is mistletoe such a crucial part of Christmas? It has its name in carols, the phrase kissing under the mistletoe would not exist if it was not for the mistletoe itself. Well, we have to thank the Norse for that.

In Norse mythology, in many tellings, Baldur’s mother Frigg casts a powerful magic to make sure that no plant grown on earth could be used as a weapon against her son.  However, Frigg forgot mistletoe. Now Hodd, a blind god, was deceived by Loki to hurl a bewitched mistletoe, the mistletoe was bewitched to always land on Baldur. Baldur, now touched by the mistletoe, died.

Frigg then declared mistletoe to be the symbol of love after her son’s death and promised to kiss anyone who passed underneath it. After being used as a medicinal plant for many years in England, the idea soon slipped into celebrations, then, the German kings and queens arrived, the Victorians had appeared, and along with them, a Christmas tree. Traditionally, you can hang mistletoe wherever you want, however, it is modern custom to hang it over the door.

Now you know why mistletoe is an object of love.

Looking at the world around us Advait B will be exploring the wonders of our wonderful world.

Black holes are some of the most mysterious yet interesting phenomena in space. Let’s start with a brief overview of how black holes are made.

When a supermassive star that is ten times the mass of the sun dies, it will ultimately turn into a black hole. Every star fuses hydrogen into helium in their cores. This creates energy pushing outwards, which counteracts the force of gravity pushing inwards towards the core of the star. When a star fuses enough elements to get to iron, the force pushing outwards cannot cope with the force of gravity pushing in. When this happens, in about 7.9 billion years for the Sun, it will swell up and swallow the inner planets. Then it will shed its outer layers leaving the core as a white dwarf. But, in a supermassive star, the force of gravity would immediately push in towards the core, causing the star to implode in a supernova. These are the biggest explosions in the universe and their effects can be detected from many light years away. After the star implodes, it will either turn into a neutron star, or if the mass of the star was big enough, a black hole. Black holes were once thought to be way to weird to exist, but then the first black hole, Cygnus X-1, was found. The event horizon of a black hole is the point of no return. If you crossed the event horizon, then there would be nothing you could do to get out and there is only one direction: towards the singularity at the centre. The singularity is a point in space with zero surface area. The singularity is infinitely small, kind of like 100-99.9 recurring. All of the mass of the black hole is contained in this singularity. To exit the event horizon, you would have to go faster than the speed of light, which by our current understanding of physics and by what Einstein proved, is impossible. As you get closer to the singularity, viewers from the outside seem to see you slow down, but to you, it stays the same. Eventually, as you reach the speed of light, to the viewers, you seem to stop moving. At this speed, you will be able to see the whole future of the universe go by, before you reach the singularity. It is unknown what happens next, but a possible theory is that it takes you to another part of the universe. These are called wormholes, and may not exist, but are so complicated that I cannot explain them here. Even black holes die off after a long period of time. Let’s take a look at empty space. Except, it’s not empty. Particles and anti-particles are constantly appearing and annihilating each other. If a pair of these appear right on the edge of the event horizon, one of them gets sucked into the black hole, but one of them escapes. This causes the black hole to lose mass. This is known as Hawking Radiation. However, this takes place over a very, very, very, long time, so a supermassive black hole may decay over a google years. That is 1 with a hundred zeros behind it! This is more years than the number of atoms in the entire universe. Therefore, black holes will be the last heavenly body in our universe, and a last home for humanity in a dying universe. The last human existence may live around a black hole.

Feeling Christmassy yet? This should get you in the mood! Watch the Hampton boys perform some festive classics in our Festival of Carols.

Thanks to our outstanding Music Department for putting this fantastic performance together!

What better way to sit back and take stock of the past academic year than by watching the Hampton Highlights 2019-20 video below. A quite historic year in Hampton’s long and distinguished history, I am sure you will agree!

We had an impressive 25 entries for the five questions last week, 1B are in the lead with six submissions! Well done to the following boys (make sure to add your merits in the back of your homework diaries and to collect your merit certificates when you reach 10!):

Have a wonderful Christmas holiday!