We’ve got there! One of the strangest ever half terms has drawn to a close and the Third Year boys have well and truly earned their two weeks off. As we break for half term, London has moved into Tier 2 Covid restrictions and, whilst the national outlook remains uncertain, the spirits of the boys remain undampened and it has been a pleasure to share the School building with them over the past few weeks. As the Headmaster observed recently:

The true essence of Hampton and of being a Hamptonian ─ is the way in which we support and look after one another, especially during challenging times.

The boys made the most of their Form time on Thursday by exploring the thought-provoking resources that the Genocide 80Twenty group have kindly put together. They did so in a manner befitting of this sombre topic, reflecting wisely on the lessons that humanity can learn from its past mistakes.

Earlier in the week, the boys discussed their potential agenda items for a Year Group Council meeting next half term – we’re always open to suggestions on how School life could be changed or adapted for the benefit of everyone!

Well done to everyone involved in the School community for reaching a much needed half term break. We have said on several occasions how impressed we have been with the boys so far this term. They have shown great adaptability and resilience in the face of challenging new circumstances. These are important attributes that will serve them well in future. We hope that the boys will enjoy a restful half term break.

To ensure the boys have a good rest over the holiday, we asked all Third Year subject teachers to avoid setting any homework to complete over half term, unless it was absolutely essential, had already been set or was part of a long term project.

October Grade Cards will be available via the Parent Portal from 4pm today (Friday 16 October). Please take some time to review your son’s grade card and discuss it with him over half term. We will conduct analysis of grades over the holiday and address any issues arising at the start of November.

In case any parents are planning to buy replacement School shoes over the half term break, please can we request that all School shoes are black, non-branded (externally) and leather.

Given the imposition of increased government lockdown measures for many of us from midnight tonight, we anticipate that many Third Year boys will be tempted to spend large amounts of their free time over the holidays online. Whilst this is understandable, we wanted to alert parents to some potential issues and give some top tips to mitigate risks.

Have a lovely holiday!

At the beginning of lockdown during the last academic year, one of last year’s Third Year pupils set up an Instagram page to talk about what sports personalities and clubs were doing during lockdown. Since then, he has also introduced a blog.

“I have enjoyed learning how to create my own blog using wix and interviewing sports men and women. I have recently spoken with Jason Leonard, the most capped England rugby union player; Former Surrey Cricket Captain, Gareth Batty and Woking football club to discuss the effects of the pandemic on the club and national league football as a whole.”

Ronit R (3C) tells us more about what his Third Year class learnt in Physics this week:

In Physics, we learnt about static electricity with the Van de Graaf generator. Through friction, it creates a positive charge and so when we touched it, we became positively charged. Since all our hairs become positively charged, they repel from our head and from each other, causing them to stick up in different directions. It was a really fun lesson about static electricity, using the Van de Graaf generator.

Take a look at how the boys got on:

Max M (3B) tells us about his Drama lesson this week:

On Wednesday, we performed our drama pieces of slapstick and natural performances. We were tasked with performing both in one performance and we did this by using many big expressions and funny actions. It was a lot of fun.

Take a look below at a couple of the sketches the boys performed:

Since the start of term, Ryan M 3J, has been volunteering at a local charity, ‘Surplus to Supper’, every weekend.  He has helped move and sort surplus food collected from local supermarkets and businesses, which the charity then distributes to food banks, community groups and schools in the three neighbouring boroughs.  The charity also hold a food stall on Saturday and Sunday, at Sunbury Cricket club, just down the road from the Millennium Boathouse, which is open to all and monetary donations are put back into the charity to continue their work in bridging the gap between food waste and food poverty. https://www.surplustosupper.org

Surplus to Supper are always seeking volunteers, so boys who would like to complete this component of their Duke Of Edinburgh award, or just donate their time for the greater good, are welcome to contact the charity for more information. 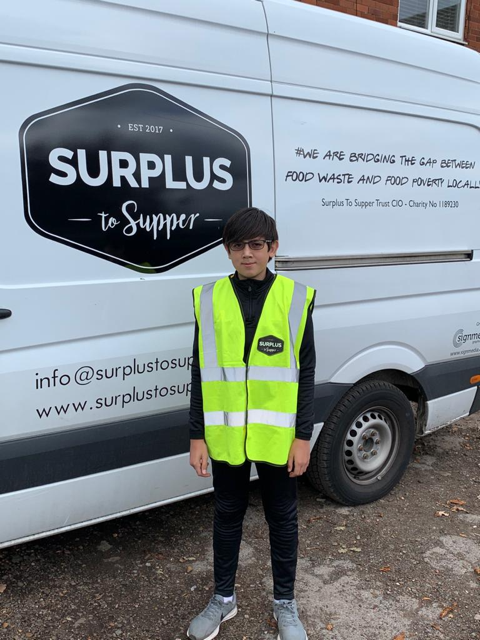 Our Third Years competed in the hotly-contested annual cross country trials in their Games session this week and there were some fantastic performances on show: 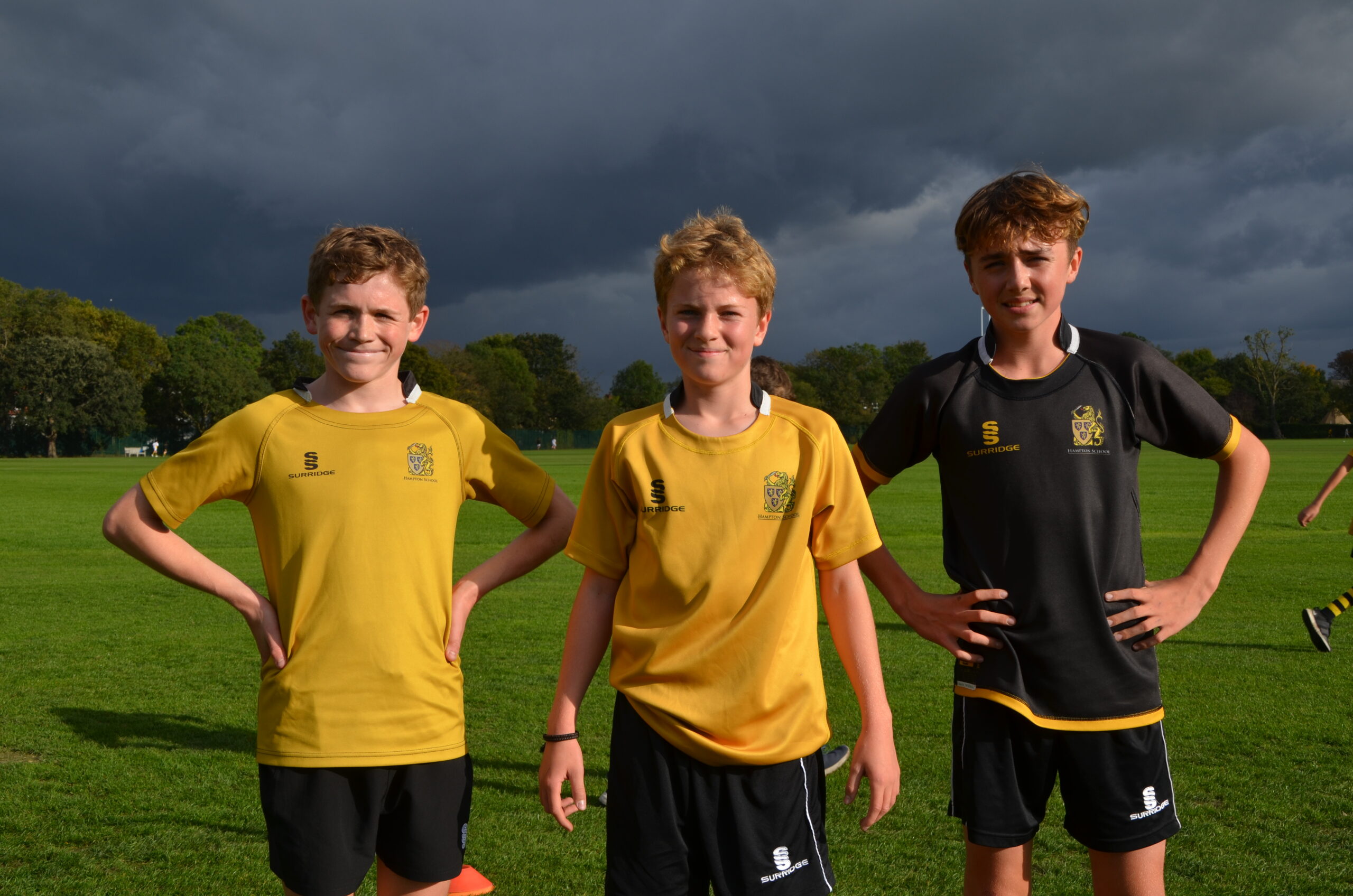 Well done to everyone who took part!

We are delighted that leading historian David Olusoga will be presenting our first Talk! of the academic year on Monday 2 November at 5pm.

Live and broadcast online, David’s talk is free but bookings must be made in advance via the link below. The online link will be sent out to all attendees shortly prior to the event.

In football news from last weekend, the U14A team enjoyed a superb 3-0 victory over Bradfield College. It was also fantastic to see our U14C and U14D teams in action. Olly S (U14C) and Henry F (U14D) report on the action below.

On Saturday 10 October the U14C team lined up their 14 player strong squad to play against Bradfield College. The game started with three quick attacks from the Hampton side, eventually resulting in a goal from Jack S. However, Bradfield were quick to respond and equalised in the next two minutes.

The game only got tougher for Hampton as Bradfield bagged two more before half-time. Going into the second half there was more intent from Hampton which eventually resulted in a great goal from Fahad H on the edge of the box. Unfortunately, Bradfield would not give up and in the dying moments of the game they grabbed another goal to seal the game.

The game finished 4-2 to Bradfield but it was a strong performance from Hampton and the C team will be looking to play more games in the future.

The U14D squad played their second match of the year against Bradfield on Saturday. However, it didn’t start well for Hampton, 1-0 down after only 5 minutes. Only a few minutes later though, the ball found itself to Henry F on the edge of the box who hit it hard and low into the bottom right hand corner, levelling the game. Only 5 minutes later, and after a good move, from inside the box Oscar S put Hampton in front with a good finish. Going into half time Hampton were positive, and only a few minutes after the restart Harry S curled a great effort into the top left corner from outside the area, doubling Hampton’s lead . The game died down after this but Hampton were still dominant and with only a few minutes left the ball found Harry S inside the box as he drilled it into the far corner to grab a brace. Overall a great 4-1 win for the Ds with special mention to the defence who played great all game and everyone else who contributed to the win.

Only 45% of you managed to guess the correct score of 3-0 on penalties in the ESFA Cup final of 2019 – a thrilling day for all of the Hampton School community!

No question this week, but thank you for all your contributions throughout half term.

Have a great break and see you in November!