The School rowing community have been coming up with inventive ways to keep their rowers active, competitive and busy.

Last weekend should have been the first multi-lane regatta of the 2020 rowing season with both the BASHER event and Wallingford regatta due to take place. Instead the Boat Club challenged its members to a 5km running fixture against fierce rivals Radley College. All members of the Hampton rowing community were encouraged to take part from the J14s to the First VIII, family members, alumni and rowing coaches.

The virtual race included 19 events ranging from individual and crew averages for each age group, as well as an All-Star Fastest Family VIII. The competition couldn’t have been closer with just one entry separating the two schools: Hampton achieving 162 entries versus Radley 161.

Particular mention must go to J14 rower Theo Webb, who was not only the fastest Third Year across both schools, but whose 5km time would also have challenged members of the Hampton First VIII crew! 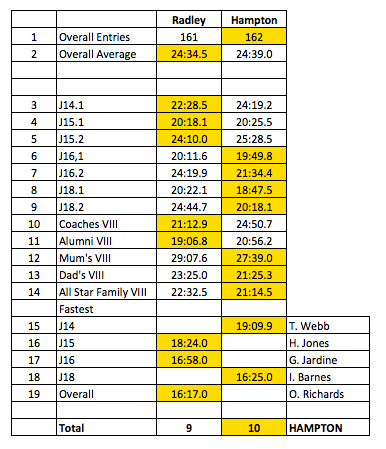 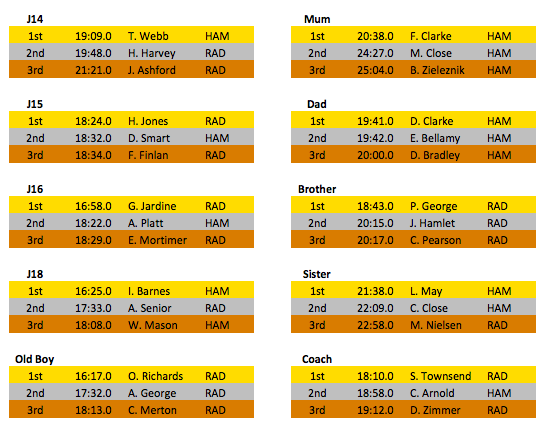 Miss Helen Taylor, coach of the First VIII, was delighted with the response from the Hampton rowing community:

It was a fantastic competition overall and great to have so many of ours rowers joining in – I don’t think any of us expected it to be so close! There were 162 entries across the Boat Club, which is brilliant with lots of family members getting involved.

J16 rower Jake Green has also stayed active during his time at home and successfully completed an ‘Everesting’ challenge on his e-bike through online cycling app Zwift. The challenge consisted of climbing the equivalent of Mount Everest, which equates to a massive 8,848m. Jake then kept going until he’d completed over 10km with a final achievement of 10,380 vertical metres and 252km overall in a total time of just over 15 hours. An impressive feat!