Hamptonians and their families are celebrating magnificent record-breaking A Level and Pre-U results. A remarkable 45% of all exam grades this year were at A* compared with a national average of 8% and 79% of grades were at A*or A, confirming Hampton’s place among the highest achieving academic schools in the country. 17 boys achieved four A* grades and a further 30 recorded three A* grades. 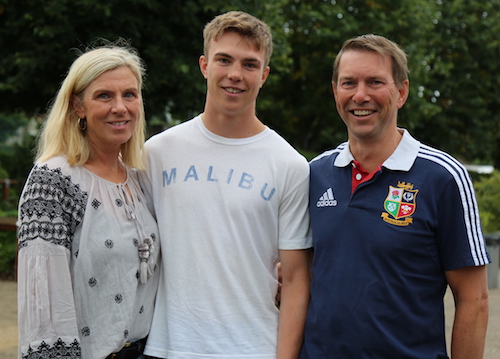 School Captain, James Thompson, aced another set of public examinations. James, who chalked up ten A*s at I/GCSE, learned today that he had achieved four straight A*s in his A Levels, securing his place to read Biochemistry at Durham University.

Also delighted with their results are Dara Sanwal, Thomas Hazell and Leo Currie who follow in the footsteps of a host of leading politicians, journalists and diplomats as they head to Oxford University to study PPE. Hampton’s aspiring medics fared well too: Alwaleed Al-Doory has secured three A* grades and heads to Trinity Hall, Cambridge, while Hiruna Diyasena and Saeash Jeyarajan, with 3 A* grades each, head to UCL and Imperial College respectively.

Hampton’s musicians have enjoyed a stellar year.  Among the Upper Sixth Formers who have just returned from a sell-out Edinburgh Fringe run with Voices of Lions, the School’s male voice choir, Nicholas Dibb-Fuller heads to Cambridge University to read Maths along with Organ Scholar, Felix Elliott and natural scientist Jasper Newbold, who both have places at Girton College. Fellow musician and dramatist Matthew Mundy, star of the Senior Musical Crazy for You, secures his place to read Chemistry at Oxford University.

Another straight A* grades Hamptonian, Julian Vanbrugh, is delighted to be heading to Coventry University to study Motorsport Engineering. Julian who has had a lifetime passion for Formula 1 says:

I’m delighted with my result and can’t wait to start my course. It is something that I have wanted to pursue ever since watching F1 on the TV as a young boy.

Hampton’s sportsmen also excelled. 1st XV Rugby Captain, Louis Lynagh, who has four England caps to date and has recently signed a professional contract with Harlequins Rugby Club, secured his place at Surrey University to read Business Management. The School’s 1st XI footballers topped off a momentous year following their victory in the English Schools’ (ESFA) FA Cup in April. Among them, Captain George Maxwell and striker Sean-Chris Joash have both taken up football (soccer) scholarships in the USA; Lucas Boyle is off to Oxford University to read Spanish; goalkeeper and ESFA Final penalty shoot-out hero, Tim Wallace, heads to Cambridge to read Natural Sciences.

These wonderful A Level and Pre-U results are testament to the talent, enthusiasm and dedication of our boys and their teachers, and once again place Hampton among a very select number of schools nationally.  We are overjoyed that Hamptonians have achieved the success they deserve, ensuring that they can pursue their chosen paths at leading universities in the UK and abroad.

In the best traditions of a Hampton education, our 2019 Leavers have also been superb role models in terms of their kindness, their generous-spirited support for one another and their commitment to wider School life.  They can be delighted at having achieved these record examination results alongside excelling in Music, Drama, Sport and many other co-curricular areas.

We wish them every future happiness as they leave Hampton and embark upon the next exciting stage of their lives.  Many congratulations, boys!

Images from the Day