This is a new development for Hampton this year. A few weeks ago, we heard about the internal phase of the poetry competition, in which all Spanish and German students in the Second Year took part, leading to a final in the lecture theatre. Now Vishal S tells us how our representatives got on in the competition proper:

On Tuesday 18 June four Hampton boys, Vishal S, Tom O, Max C and Lucas S competed in the finals of the Modern Language Poetry Live Competition. The competition began with a welcome speech from the Director of St Mary’s University Institute of Education, Anna Gordon. Next, round 1 began, where all 65 participants performed their prepared poem in either, Spanish, German or French. We were lined up in our seats in a long queue, gradually shuffling along until we reached the head of the queue ready to be the next performer – this was very nerve-wracking! There was a great variety of performance styles from serious recitals through to humour and singing. After all performances were completed, round 2 began. The students in the three different languages moved into 3 different rooms. In round 2, each student was giving a random, unseen poem which they had to prepare in 5 minutes. We were allowed to ask meanings of words – but not the pronunciation. After 5 minutes, all students lined up and then performed to the judges the unseen poem one by one. Afterwards, there were refreshments and a talk about how useful languages can be in your life. Finally, there was the presentation of awards. The judges marked us on five criteria based on our poem performances, which were: accuracy, fluency, clarity, pronunciation and star quality. This was only Hampton’s first year in the competition, but we were very successful and achieved 2 gold wins out of a possible 3! Vishal S won first place in the Spanish competition and Tom O won first place in the German competition. Both boys were awarded with trophies and a plate for Hampton. As the finale to the evening, Vishal S and Tom O both performed their unseen poems. The evening was thoroughly enjoyed with students from all schools showing impressive poetry skills in all 3 languages, especially since they were performing in front of an audience of over 200. Many thanks also goes to Mrs McGreevy and Miss Willett for supporting us. 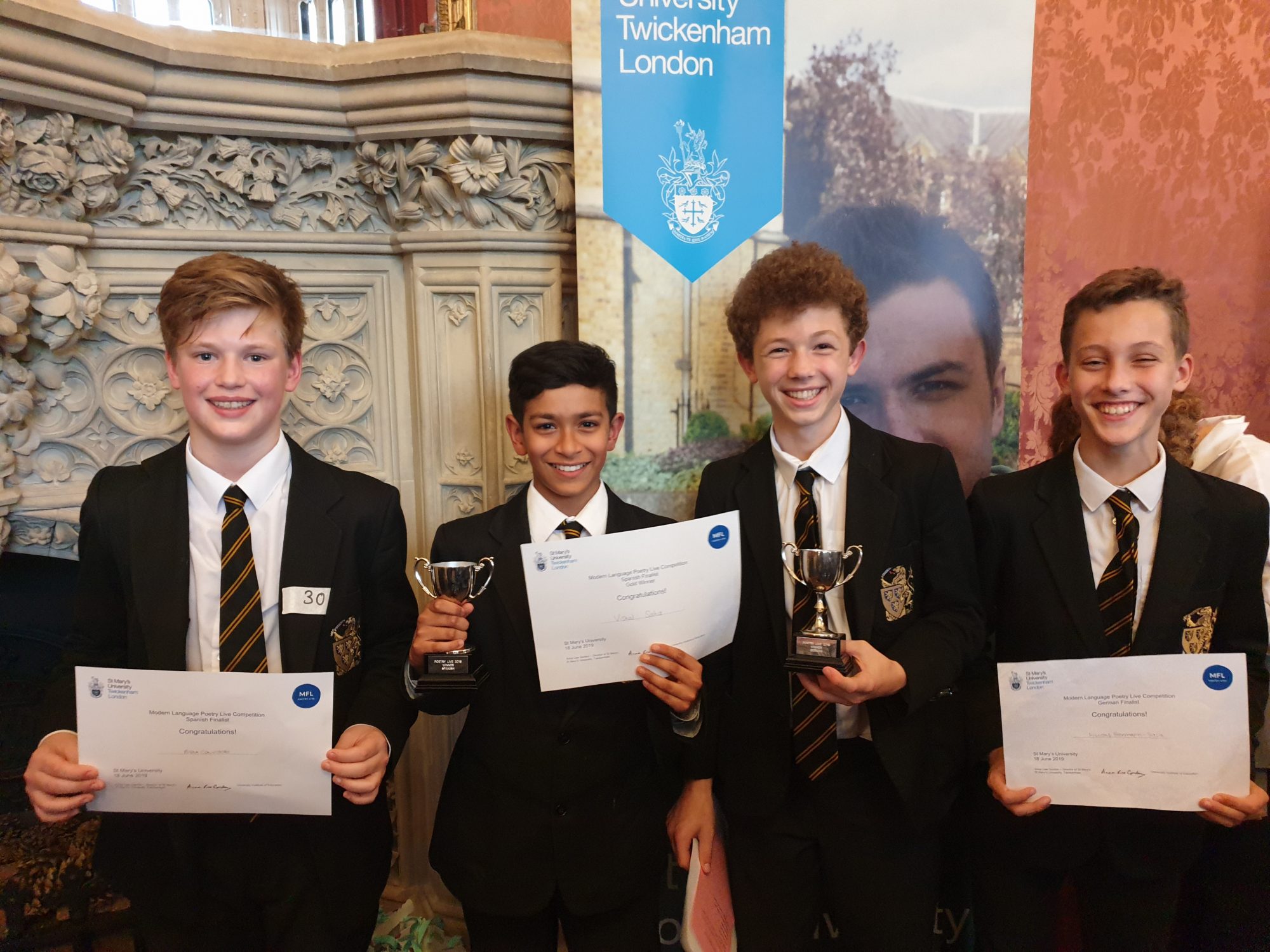 This was a really fantastic event and amazing result for us as a school. A huge well done, felicidades and glückwunsch to all our representatives, especially to Vishal and Tom.

For the second week running, let’s get some (hypote)news on the Second Year mathematicians, this time courtesy of Henry A:

On Monday 17 June, Henry A, George B, and Akshat M and Krishna W from the Third Year went to the national finals of the Team Maths Challenge. We had to solve challenging maths problems and create a poster based on constructions. We all enjoyed it a lot and we ended up coming 20th out of 88 schools that participated in the national finals, which we were happy with.

Cricket has rather dominated the sports reports this term but I’m delighted we can now redress that balance with this very thorough tennis report from Josh H:

Following a 9-0 win against KCS during the last week, the U13 tennis looked to continue their unbeaten run in all competitions into this colossal clash. As a result of previous scores, the match was a pathway to the Surrey Tennis Finals for both teams – whoever came out on top got through.

The first set of fixtures were successful as both our first pair (Rohan and Tom) and our second pair (Me and Vish) won our respective matches. However, unluckily the third pair (Ed and Kieran) lost out to a very strong St George’s first pair.

Finally, the round in which everybody plays their opposite seeding (1st v 1st, 2nd v 2nd, 3rd v 3rd). All was even on the scoreboard and in order to go through, we needed to win 2 out of the 3 matches. Rohan and Tom kicked off with a great performance, some of the rallies of the day taking place. As both of them once again provided no weaknesses for the opposition to capitalise on, they managed to trouble St George’s and put up a very strong performance. However, in the end another close defeat came about for us. Now both our second and third seeds had to win for us to go through. Kieran and Ed also played some great tennis with some solid consistency and a few great shots every time I looked over from my game. Due to a great deal of resilience and grit, the duo won the game to equal the race in the road to the finals. Now it was all down to me and Vish. Having been 2-1 down in games, we pulled one back to produce another twist to this nail biting affair. After a steady break of serve, we had gone 3-2 up – now serving for a place in the finals. Vish, cool as ice, produced a smooth set of serves and shots which accompanied by some strong net play led us to a match point at 40-15 to us. Vish served which was followed by a return from the opponent which just floated out!

Unbeaten so far and full of confidence, this Hampton have a great chance in the Finals on Tuesday 25 June.

In cricket, the As and Bs didn’t have too much success against St. Paul’s last weekend (which might be why they haven’t sent in reports…) but luckily the Cs gave us something to celebrate

On Saturday 15 June, the U13C Hampton cricket team played against St Paul’s. Joe W, Hampton’s captain, won the toss and chose to field first. In the first couple of overs, the batsmen of St Paul’s scored very little runs because of the great fielding and bowling. Soon, at around 10 overs, some breakthroughs came, and the wickets came pouring in for Hampton. Memorable wickets included; a great catch by Monty R, a Yorker from Max, and the bails being broken twice by both, Rohan C and Ben M-J. The innings ended 55-8, putting Hampton firmly in charge. Because of this, we reversed the batting order. After a slow start and a display of excellent fielding by St Paul’s, Hampton needed runs coming into the last 8 overs. Thomas B provided just that, scoring a four and lots of singles and twos, to put Hampton in the lead, ending the innings, 56-4 after 14 and a half overs.

Two dingbats this week. A merit for each – send in your answers to c.malston@hamptonschool.org.uk

If at first you don’t succeed, joke, joke, joke again. I’ve lost count of the amount of times John S has submitted this joke. For sheer perseverance, let’s make it the winner this week.