Fourth Year pupil, George Sanders, was honoured for his artwork at the Berlin Embassy as part of the Together: UK-German Centenary Project. 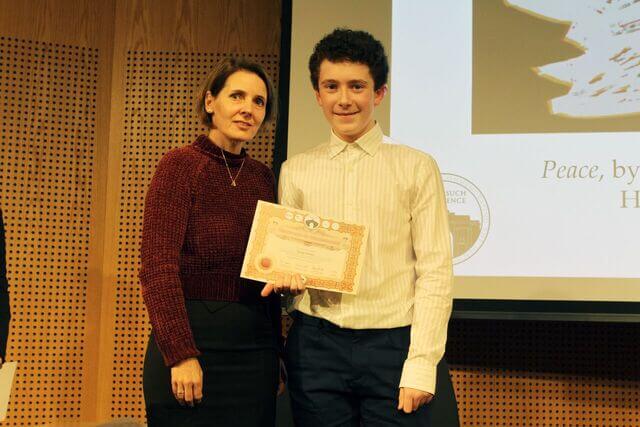 For the final year of the centenary of the First World War, the charity Never Such Innocence invited young people from both the UK and Germany to work in partnership, or independently, to create poetry, art or songs inspired by our shared history. Entrants were encouraged to draw on the events of the First World War and create messages of hope and unity for the future. As winner in the 11-14 category for his artwork “Peace”, George was invited to attend a reception at the British Embassy in Berlin. He was presented with a Certificate of Commendation and a copy of the Never Such Innocence Anthology by the British Ambassador, Sir Sebastian Wood.

Hampton School Art Department has had close links with Never Such Innocence since it was set up in 2014 to mark the Centenary of the First World War and a number of our pupils have had their work acknowledged by the charity.

As well as the Ambassador’s reception, George also had the opportunity to visit iconic Berlin landmarks such as the Brandenburg Gate and the Reichstag building. On the final day of George’s visit, all 48 winners from the UK and Germany collaborated to create a final song. George says his time in Berlin was truly memorable:

It was great to visit Berlin and have my artwork recognised; it was a huge compliment. I found it very moving to think about the war 100 years ago and then see all the British and German school children creating art and poetry together to commemorate the centenary at the Berlin Embassy. It was a trip I’ll never forget.