Congratulations to James Dowden, Lower Sixth, who has won the London Voices Citizen Journalism competition for his article on Hampton and Richmond Borough Football Club.

Here is his winning entry:

“You look out on that pitch and it just catches you”: A season of following the highs, the lows and the nirvana of non-league football

When you think of football what comes to mind? Bright lights, incredible skills, trophies and highly-paid global icons. You perhaps do not consider that there is indeed a world outside this. Non-league football refers to the divisions that are outside the top four professional leagues in England. In non-league you will find semi-pro footballers balancing their working lives whilst still turning out on a Saturday to represent the club in front of hundreds if not thousands of fans.

One of these such clubs in Hampton and Richmond Borough FC. Having started out in various local Middlesex leagues the ‘Beavers’ as they are nicknamed having been playing in the 6th division of English football, the Vanarama National League South, since promotion in 2015.

Having qualified for the playoffs in the 2016/17 season only to be denied by eventual winners Ebbsfleet United, Hampton fans were positive heading into the new season, yet no one could have predicted the magical fairy tale of a season the side was to have.

Under the guidance of former Millwall and Fulham defender Alan Dowson the club recruited smartly during the transfer window. In came experience in the shape of Max Kretzschmar (over 73 appearances for Wycombe in the Football League) and Charlie Wassmer (formerly of Oxford United) both of whom would go on to prove vital in the season ahead.

Another member of the back-room staff is Martin Tyler, who acts as assistant manager. Regular football watchers may have heard his voice on Sky Sports as one of their leading commentators over the last 20 years. I was privileged to be able to sit down and interview him this season about his career in the footballing world and it is his kindness and willing attitude of the club that was to become a theme through the course of the season. 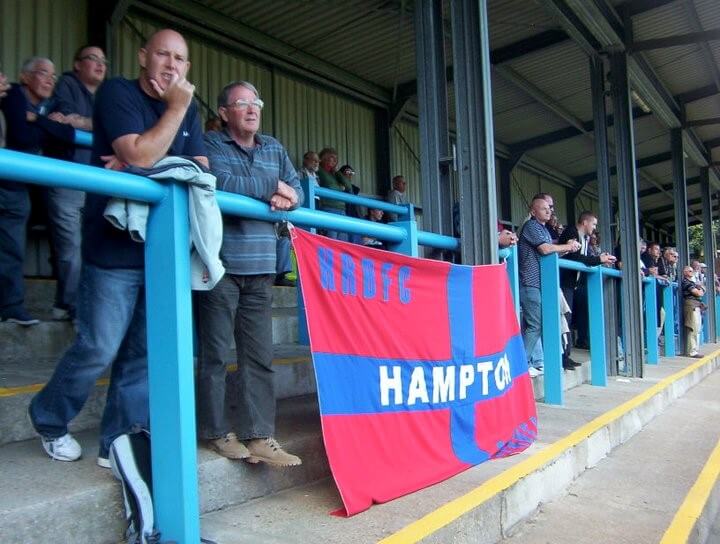 The Beavers started the season slowly with a high number of draws. In fact, the side went on a 6-game drawing streak which had the fans wondering if they would ever see their side win again!

However, through thick and thin the fans stuck with the team admirably, whether it be a 3.00 o’clock on a Saturday or a 7.45 on a Tuesday.

For many sides the FA cup doesn’t begin until January, however not for non-league sides like Hampton it starts early in the season. The Beavers kicked off their cup run on a cold, rainy day in south west London against Potters Bar Town on the 16th September 2017. A 1-1 drawn ensured a replay was to be contested just three days later- a far cry from the weeks of rest granted to many players at the highest echelons of the professional game. The hardy travelling Hampton supporters were rewarded for their trek to Hertfordshire on a Tuesday night with a fine performance and a 3-0 win to send them into the next round of the cup.

For the next round Hampton were drawn away against Cinderford Town and the prospect of a 238-mile round trip to the Forest of Dean! Here the community spirit and togetherness of the club and fans was demonstrated as a supporter’s coach was put on to help those get to the game. The coach travel was all organized by volunteers who through the course of the season gave up hundreds of hours for the love of the club. From groundsmen to programme sellers and from social media correspondents to kitchen staff, clubs like Hampton and others in your local area simply couldn’t survive without their selfless dedication of time and effort.

Continuing their FA cup adventure against Truro City, Hampton were now just one game away from the chance to meet a team from the Football League (up to three divisions above Hampton). Cheered on by a fervent home crowd Hampton started well but found themselves a goal down heading into the final 10 minutes. Suddenly Hampton were awarded a penalty and the dream was back alive. Current Barnet FC player, Dan Sweeny, stepped up an unleashed a venomous strike which seemed destined for the top corner, only for the Truro City keeper to pull off a magnificent save. Truro held firm and Hampton were left to dream another day for a potential tie against one of the giants of English football.

So near and yet so far…

During this period the Beavers went on a club record 23 matches unbeaten in the league, stretching across a five-month period. In January I was able to attend my first away match of the season against our arch rivals, Wealdstone FC. I can remember the excitement bubbling up inside me as I journeyed across London on the tube to the stadium in Harrow. A hattrick inside the opening 15 minutes from new signing, the Grenadian striker, Elliot Charles sent the Beaver’s fans into raptures.

I had caught the bug and the next week it was off to Eastbourne Borough FC in East Sussex for another away day with the HRBFC faithful. The journey itself was a bit of a nightmare with a cancelled train, the dreaded rail replacement service and a seemingly never-ending winding local shuttle bus, but I eventually arrived into the stadium just as the match was kicking off. I took up my place on the terrace with the now familiar away fans and began the classic chants about players and the glories of Hampton. All the travel effort was worth it in the end as Hampton ran out 2-1 winners having initially trailed after the opening minutes. 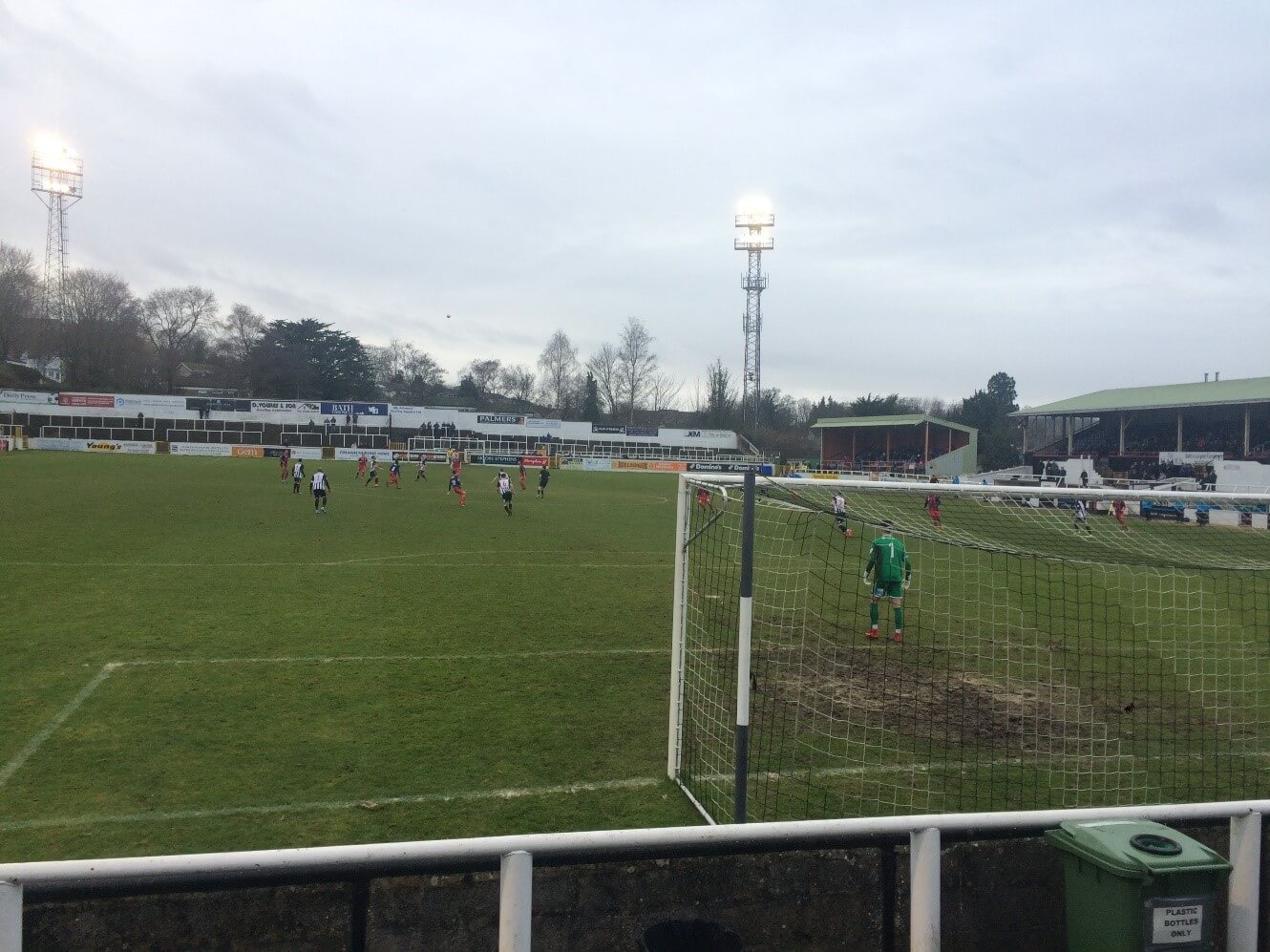 The ground for Bath City FC

Next up for Hampton was another away game against Bath City. Having persuaded my somewhat reluctant parents to let me travel to Bath by myself I enjoyed a long but efficient journey from London Euston to Bath, before taking a local bus service to the picturesque ground, marked by its old-fashioned floodlights. The game itself was a forgettable occasion with the Beavers being 3-0 down inside the opening half of the game. Nevertheless, it is in moments like these when you truly discover what it means to be a football fan. There may be highs and there may be lows but the one thing that is constant is the undying support of fans and whether it be in the Premier League or the National League South for my money there is no difference in the passion and support they bring to their respective clubs. During the game I got speaking to a man about the game and Hampton. It later transpired that he was the father of Max Kretzschmar (one of our midfielders) – something that wouldn’t happen at your typical Premier League game. A further show of the tight spirit of the fans occurred when I was invited to the bar for the traditional post-match supporters drink, however owing to tight train timetables I sadly had to decline.

Despite this slip up the Beavers continued their march up the table and by March the league title seemed a distinct possibility. This would have been an incredible achievement for the club as they currently operate on one of the lowest budgets in the division. An away match to league leaders Havant and Waterlooville provided a fantastic opportunity, however a 0-0 draw dented their hope.

The next away game was to be Dartford, currently in second place and a must win match for Hampton. Having set of early on the now customary route to games (the 10.51 South West Train service to London Waterloo) it began to rain. And it rained, and it rained… Arriving at the ground fellow supporters discussed how they thought that the game might be abandoned. Alas it was not, and on what can only be described as a mud bath, Beaver hearts were broken in the 96th minutes, as Dartford slammed in a later, agonising equaliser. On opening my bag after the game, it also transpired that my bag had been somewhat less waterproof than I had thought and so I was forced to tip the water out to prevent my iPhone drowning in an abyss of Kent monsoon rain. 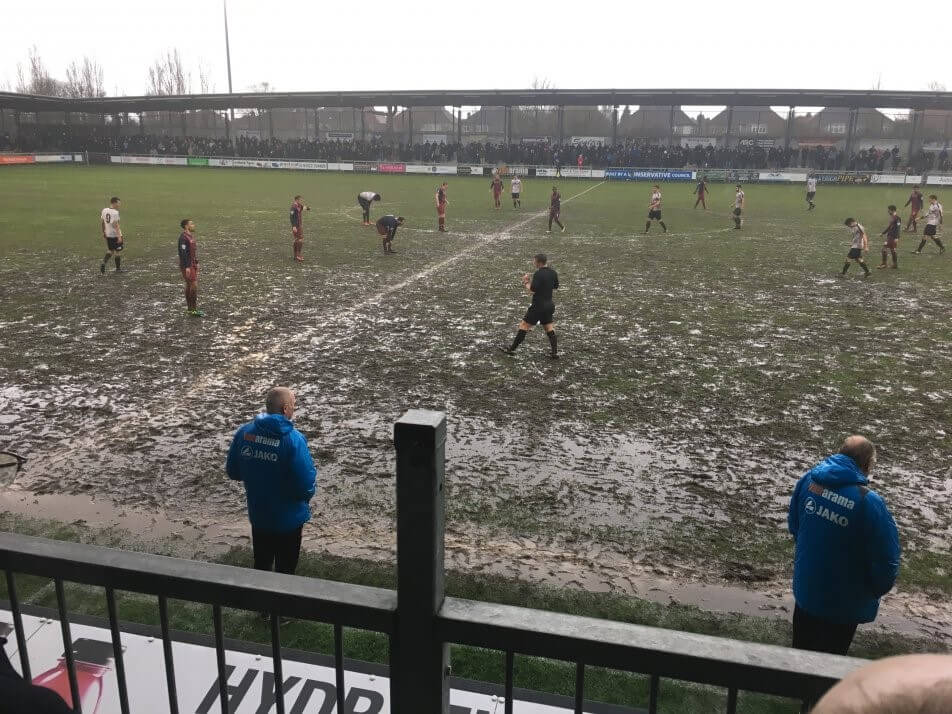 The final away game of the season was to be St Albans. A win would see Hampton into the playoffs and a defeat would see them miss out. A superb goal from Taurean Roberts sent the traveling army into scenes of mass jubilation, whilst also resulting in a red flare being set off, and thus the stadium resembling more of a continent atmosphere than a cloudy Saturday in Hertfordshire. 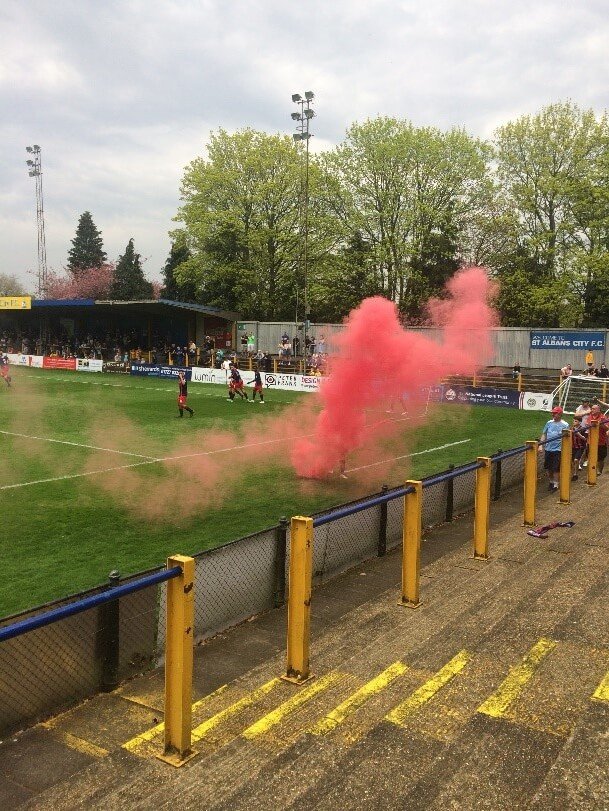 Having qualified for the playoffs and navigated tricky ties against both Truro City (again!) and Chelmsford City (also again!) Hampton and Richmond Borough faced Braintree Town at home for the right to play in the National League next year (the 5th division of English Football). A valiant effort saw the two sides looked dead even at 1-1 meaning that the game was to be decided by a penalty shootout. After Braintree missed their first spot kick to give Hampton the lead, the fans went into a pandemonium, as I started hugging people that had followed Hampton around the country with me as well. However, it was a cruel turn of events, Hampton missed their next two kicks as Braintree converted the rest of theirs to send them to the National League.

So near and yet so far…

Everyone in London has a local side. Yes, it may be Chelsea or Arsenal or even Tottenham Hotspur. However, for every Premier League side there is a non-league equivalent dependent on the undying love of volunteers and fans to keep the club alive. In a world away from the sterile fans of the Premier League, non-league is both welcoming and diverse and ‘by the fans for the fans’. Players come up and speak to you after the game, fellow supporters become your friends for life and whether you are winning or losing, they will always turn up.

Hampton fan Alec, who has been following the side since his youth puts it best:

You look out on that pitch and it just catches you. From the moment you walk in, it’s the people, it’s everyone behind the bar, everyone in the boardroom. They just make you so welcome. I have been coming down fifteen years and I have never felt more part of a family.