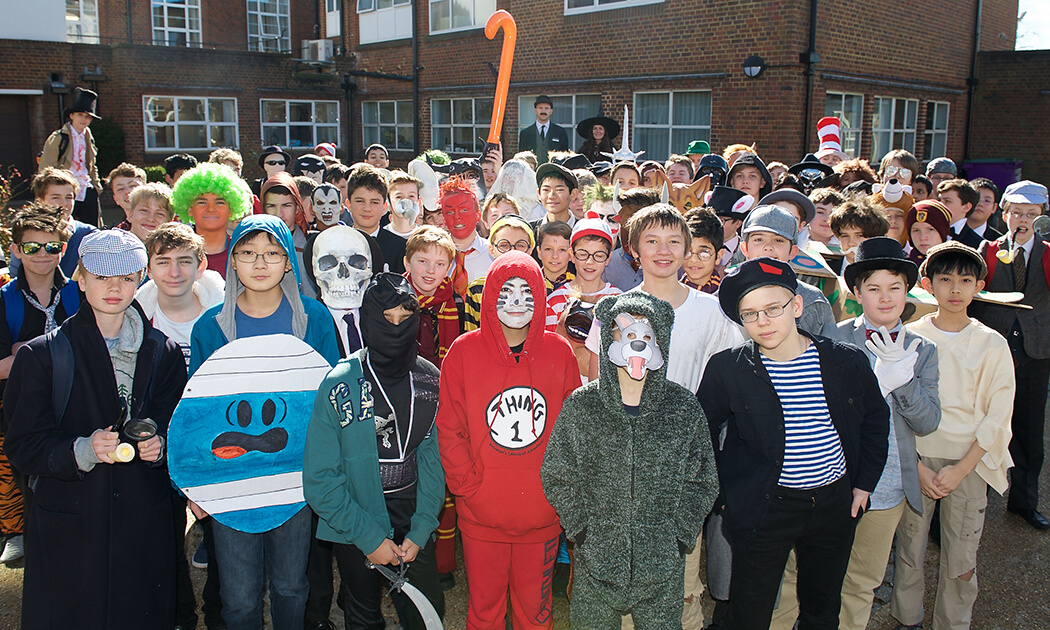 This week we start by saying a huge thank you to everyone who participated in Literary Character Day on Friday – the grand total raised for Form Charity this year was £760.85. A special mention goes to 2J, who raised a staggering £237.50!  The winner of the Best Costume award was Lucas Cabezas-Klikovac in 2H, who came as Miss Havisham from Charles Dickens’s Great Expectations.   Let’s hear from our worthy winner:

‘I had a few favourite characters in mind but I knew they would be very popular among my peers.  I only came up with the idea of dressing as Miss Havisham from the Dickens’s Great Expectation when I heard my mum and dad discussing a series that they just finished watching called Dickensian, a BBC adaptation. This reminded me how impressed I had been by this Dickens novel.  After reading it I had also seen a production in the theatre and a BBC adaption. Miss Havisham is a very bitter character and I knew she would be an original and exiting character to dress up as.  On the day of the competition there was a set of great costumes and luckily I was shortlisted with a small group of people and then ended up winning.’  Lucas Cabezas-Klikovac – 2H.

‘On Friday 4 March the Second Years celebrated World Book Day. The standard of costumes this year was incredible with many people exceeding expectations. There were more “Where’s Wallys” than anything else by miles with a total of about six.  Many people dressed as horses as well, most likely inspired by War Horse.  My top four costumes would be: Charlie Close (2J) who wrapped a bandage round his face and wore a suit, as he was the invisible boy, Lucas Cabezas-Klikovac (2H), who wore a full wedding gown with a veil to be Miss Havisham from Great Expectations, Joseph Dormer’s (2L) Assasin’s Creed costume with a fully working hidden blade and Crossbow (both plastic!) and Saul Morrison’s (2P) costume which had an amazing mask made out of tinfoil which I thought was very good.’  Theo Bailey – 2L

But Literary Character Day is not all about the dressing up.  The boys also enjoyed a talk and writing workshop from visiting author Matt Whyman.

‘As Second Year celebrated World Book Day on Friday, we were treated by a talk from visiting author Matt Whyman. He covered a number of topics, including his brief career as a wire-man, and how he came up with the idea of his world famous novel, Boy Kills Man. Some classes then had a workshop with Matt, where he highlighted on the fact that everyone needs to stop and plan their story before they write.’ Josh Bartholomew – 2L

Friday was also an eventful day for Hampton’s musicians with concerts taking place both here in the Hammond Theatre and next door at LEH.

‘On Friday, LEH and Hampton combined for a concert named ‘Secret Policeman’s Ball’ in aid of Amnesty International. The show was opened by a Sixth Form band, who performed ‘Tell Me Your Name.’ Max Elliot and Torin Umrigar (both Third Year) then played ‘All About That Bass’ by Meghan Trainor. An U6 Barbershop group then sang, before Josh Bartholomew (2L) played Thinking Out Loud.  The concert was closed by a number of LEH acts, along with the L6 band named ‘Middle Ground.’  Josh Bartholomew – 2L

Later in the evening Hampton hosted its Chamber Concert, which featured an unexpected twist.  Callum Daniel and Vlad Penzyev report:

‘The evening got off to an excellent start with the Trumpet Quartet performing Ritual Fire Dance by Manuel de Falla which gave way to many amazing performances from groups like the Reeders performing Dance of the Merlitons from the Nutcracker and Consort of Voices performing Ye Sacred Muses, then suddenly, before you knew it, it was the interval. The second half started off well with Clarinet Trio playing a piece by Felix Mendelssohn and Guitar Ensemble with The Blue Danube. Then it was time for the Folk Group’s premiere performance.  They were just getting started on their first piece, The Lakes of Pontchartrain, when suddenly, the fire alarm went off!  We all gathered at the assembly point, then two minutes later, the fire brigade arrived.  We were promptly assured that it was just that an electrician had forgotten to turn the heat sensor off in the kiln room and we resumed the concert.  When we returned the scheduled programme, the Folk Group finished their piece and we finished the concert with a lovely piece by Prokofiev from the String Quartet.’  Callum Daniel – 2L

Let’s hear a little more about that fire alarm:

‘On Friday 4 March, at about 7:20pm, during the Chamber Concert, the fire alarm went off in the middle of an American song. Everyone left the building, and then we heard a fire engine coming. To my surprise, it turned into the school, and out rushed three firemen, then into the building following Mr. Knibbs. Soon enough, he kindly informed us that one of the kilns in the Art rooms had overheated. Ten minutes later, the firemen left, after having investigated the problem. And the concert continued calmly.’ Vlad Penzyev – 2P

‘Matthew Cresswell (2P) and Jack Murphy (2P) from the Second Year and Stephon Umashangar and Edward Allen from the Third Year went with Mr Bowler to Hammersmith to take part in the UK Maths Trust Junior Team Maths Challenge on Wednesday the 9th of March. As a team, we took part in a day of maths-related challenges against 23 other schools.

The four activities we completed were very enjoyable: a group round, a ‘crossnumber’ (a maths crossword where the across team can’t see the down clues and vice versa), a shuttle where the team has to complete four questions which are all linked to each other in under 8 minutes and finally a relay where one half of the team answers a question, runs to the other side of a large hall and then brings a question to the other half of the team.

As a team, we were pleased with how we had done and at the end of the day we found out that we had won the Regional Final. This means that Hampton School have made it through to the National Finals in June. We found the competition challenging but also really good fun and we wish to thank Mr Bowler for preparing us and for his support on the actual competition day.’

Thank you Matthew and Jack for this excellent report.  We wish the very best of luck at the National Final later this year.

Meanwhile on the football pitches the U13A team’s winning streak continues, with two further victories this week.  We have match reports from Oliver Burke (2L) and Declan Connolly (2J).

‘Today we were playing nine a side on a smaller pitch than usual. However, this did not affect our football, as Sami Omaar (2J) got the first goal which was quickly followed by goals from Theo Radicopoulos (2J) and Thomas Banks (2H). Later on in the game Sami got his second and Alasdair Bolling (2W) and Oliver Burke (2L) also got a brace each. But a brilliant hat-trick from Sharyah Rezvani (2J) kept the goals coming. The defence, Maxi Grindley (2P), Danilo Delic (2B) and Harry Attwell (2P), stopped the opposition from scoring too many goals and brilliant performances from Matthew Groves (2H) and Nathan Chapplow (2J) also kept the passing game ticking along. Final score 11:2.’  Oliver Burke – 2L.

‘On Monday 7th March, Hampton played in the Surrey Cup Semi Final against Richard Challoner. We were desperate to make the final so we gave everything we had to the match. The game started and it was an end to end game until a quick free kick from Morgan Worsfold Gregg (2W), set up by Theo Radicopoulos (2J) to chip the keeper and to give Hampton a 1-0 advantage.

With a header from Alasdair Bolling (2W) magnificently saved and many attacks broken down by a well organised Richard Challoner defence things look liked it was going well for them until captain Declan Connolly (2J) met the ball on the back post from a cross from Thomas Banks (2H).  Hampton went into half time with of an advantage of 2 goals to nil.

The second half began with early pressure from Richard Challoner which was met by brave defending from Robbie Cox (2L) and Maxi Grindley (2P) to keep the score level but soon Richard Challoner pulled one back to make the score 2-1. As the game looked as if it could go either way, a cross was lumped into the box for Theo Radicopoulos (2J) to take it round the keeper and score his second goal and to secure the win for Hampton who were leading 3-1. As the final whistle blew we were so excited to know we would now play in our first of a major cup final. We can hopefully bring the trophy to Hampton.

Overall it was a good 3-1 win with some great team spirit throughout the game. We all gave 200% to the game.’ Declan Connolly – 2J

Declan Connolly also brings us good news from the Cross Country front.  He has made it into the Richmond Team for the Mini London Marathon and has recently represented Middlesex at U15 level.  Let’s hear from the man himself:

‘On Saturday 5th March I met the Middlesex Coach at 7am to travel up with the team to Nottingham for the Nationals Cross Country held at Wollaton Hall. We were given our Middlesex kit and had plenty of time to walk to course when we arrived. I was one of five Hampton Boys to represent Middlesex U15, but the only Second Year. I ran the 4.2K course well and was pleased with my time. I was the only Year 8 boy in the race so looking forward to next year which will be my year group. It was really good to be able to represent Middlesex for this event and I am hoping to be able to run for them during the track season too.’ Declan Connolly – 2J

Further afield, Sam Schomberg and Arjun Paintal have back on the pistes.

‘From the 5th of March to the 8th, four Hampton students from Second and Third Year went to Les Houches in Chamonix, France, home to the world famous Kandahar downhill piste to race at the Artemis British Interschools Ski Challenge. Sam Schomberg (2B), Arjun Paintal (2L), Ethan Scott (3G) and Cameron Barclay (3D) trained on Saturday and Sunday, and on Monday, the first races commenced. The U14s had slalom, where Sam Schomberg narrowly missed the top 10 with a place of 11, Arjun Paintal came 46th and Ethan Scott came 33rd. On the second day, Arjun came 43rd, and Sam did not finish because he crashed on the last run. So, despite a couple of crashes, Hampton did well, given that there were over 90 U14 boys competing and that the competition was exceptionally strong, as even some of the GB team were racing.  Overall, the trip was successful, and most importantly, it was fun.’  Sam Schomberg (2B) and Arjun Paintal (2L).

If your son has any news that should be mentioned in a future bulletin, please do encourage them to see me in school or email me at f.byrne@hamptonschool.org.uk and I shall be delighted to include it.