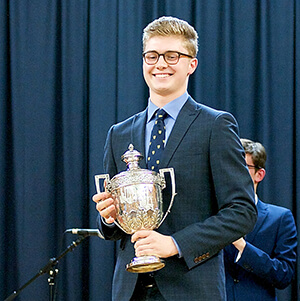 Senior Prizegiving saw former and current pupils, parents, staff and visiting dignitaries, gather together to celebrate another wonderful year of achievements in all areas of school life.

This year’s principal guest of honour was Dr Tania Mathias MP who presented the prizes, before congratulating the boys on the past year and speaking about her experiences. The evening was also attended by the Mayor of Richmond, Headteacher of The Lady Eleanor Holles School, Mrs Heather Hanbury, local councillors and the School Governors.

The Headmaster, Mr Kevin Knibbs, congratulated the boys and leavers on their successes and summed up the past year:

“2014-15, for me, confirmed that Hampton occupies perhaps unique territory in consistently being placed in the very top academic echelon nationally while also enjoying a reputation as one of the country’s most renowned sporting schools. Alongside this rare combination, the cultural life of the School was no less impressive.

“I should like to express my appreciation to all of last year’s leavers who returned to receive awards and indeed to their fellow members of the Class of 2015 who were not present for setting such an impressive example in the vanguard of the School during 2014-15.”

Over 200 prizes were awarded in total. The Dennis King Cup was awarded to George Carew-Jones, the Howes Cup to Douglas Chesterton, Matthew Legg and Huw Churchman and the Fitzwygram Cup was awarded to last year’s School Captain, Oscar Mayhew.