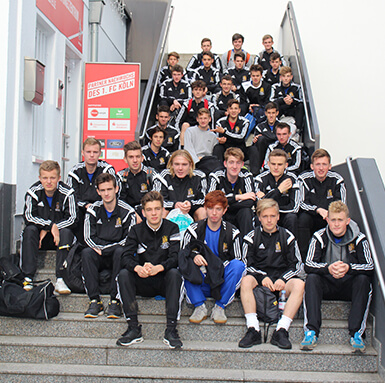 Over half term, Hampton’s senior footballers were involved in a very successful tour of Germany, winning four and drawing one of the five matches they played.

After the afternoon flight from Heathrow to Dusseldorf the tour party of 30 boys and 5 staff arrived at the Sportschule Wedau in Duisburg, where they stayed for the next 4 days. Wedau is one of the most famous training facilities in Germany and used by the German FA for both professional and amateur teams alike.

The first game of the tour saw an impressive performance from the U18 side, dominating large spells and keeping the ball well on a slick pitch which was highly suited to the expansive Hampton way of football. A tough match against SpVg Schonnebeck ended 0-0 and laid a good foundation for the rest of the tour.

As well as training and playing matches the boys took part in numerous outings throughout the tour. These included visits to Cologne Cathedral and RheinEnergiestadion, home of FC Köln, where the tour party were able to watch the local side in action in a Bundesliga match against Hannover 96.

Matches two and three of the tour saw the U17s play SuS Dinslaken and the U18s up against Rot Weiss Essen. The U18s were clinical in their 2-0 win and the U17s brilliantly came from behind twice to win 4-3.

The next leg of the tour saw the party travel to Munich, the heartland of German football. There the boys had the humbling experience of visiting Dachau concentration camp before the final round of fixtures. Both the U16s and U18s travelled to TSV Konigesburnn for the final matches, where they produced two very good performances to earn comfortable wins. A Harry Fuller hat-trick in the 9-0 win for the U18s and Calogero Scanella’s 5 goals in the U16’s 11-2 victory meant they were the tour’s joint top goalscorers.

The tour ended with a day out in Munich, including a visit of the Allianz Arena and BMW World, after which the boys and teachers got their flight back to Heathrow.

Head of Football, Mr Carlos Mills, was pleased with how the tour went:

“The tour was a great success and boys and staff involved definitely enjoyed the experienced. There was plenty of very good football on display, the first three matches were played at a very high standard and it was very satisfying to witness the boys playing at such a high level. We recieved some lovely comments from the officials, the opposition and the Germasn people we met.”