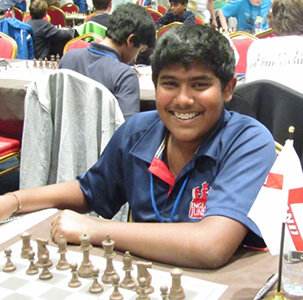 Third Year Hamptonian Koby Kalavannan competed in the World Youth Chess Championships in Thessaloniki, Greece over Half Term, competing against the best players from across the globe.

Koby played in the U14s category against 189 competitiors from a host of other countries. He finished a creditable 67th, a position which placed him top of all the British competitiors in his age category.

Koby’s strong showing in this competition is on the back of excellent results in 2014 & summer 2015. He was the British Champion at both U12 and U13, came joint 2nd in U14 levels and also travelled with the British team to compete at the European Youth Chess Championships in Batumi, Georgia (2014).

Congratulations to Koby, who definitely enjoyed the experience:

“It was really exciting to be part of the team, sharing the experience of each game. Each round was really competitive, which was fun because I’m quite a competitive person.”