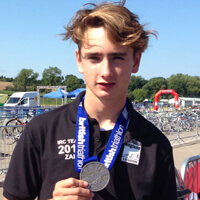 Hamptonian Zak Wort has enjoyed great recent sporting success. Zak, who is in the Fourth Year, finished second in the GB Triathlon National FInals, an event which features the strongest junior competitors from all across the country.

Zak has achieved strong results in the Triathlon Finals in the past, having won a Silver two years ago, and he qualified for this year’s event in style, winning the London Series Triathlon for the third time in a row to qualify as the best regional competitor.

The performance put in by Zak was made more impressive by the injury he sustained during the race. He injured his right foot but was still able to complete the 350m swim, 8km cycle and 2.5km run in a time which got him on the podium.

Early in the summer Zak also competed in the ESAA Athletics Finals at Gateshead, representing Middlesex. This is a major sporting event and a great recognition of his potential as a junior athlete.

Zak was understandably pleased wth his results over the summer:

“It was a great honour to represent Middlesex in the Athletics Finals and I hope I am able to come back next summer to compete. I was really happy that my hard work in the Triathlon paid off in the National Finals and, although I picked up an injury, it was great to win a medal in such a prestigious event”