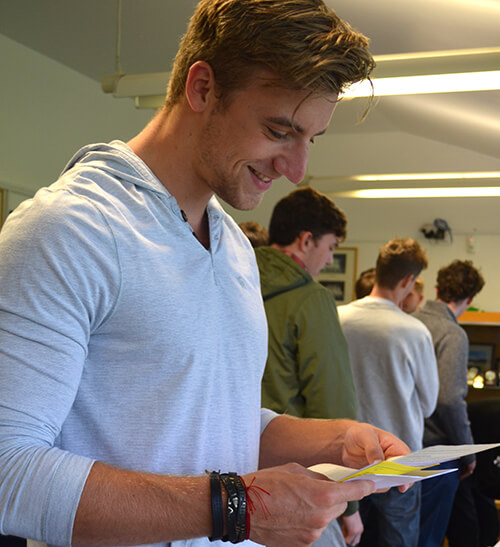 A Level results’ day saw well-deserved celebrations for Hampton boys, parents and staff as a School record number of A* top grades were achieved by the departing Upper Sixth.

Overall, a remarkable 33.5% of A Level and Pre-U grades awarded to Hamptonians were A*s compared with a national figure of 8.2%.

The delighted boys and parents included Sachin Dias, who arrived early at School with his mother Renu to discover that he had achieved 3 A* grades. He now heads to Bath University to study Physics and Astro Physics.

1st XV Rugby Captain Jacob Goss, who led the Hampton side to the quarter-finals of the NatWest Cup, displayed equal academic prowess. His 4A* grades will enable him to take up his place at Oxford University to read Physics.

There were welcome success stories for the Brown and Lee twins. Andrew and Cameron Brown both achieved 3 A* grades, while Ira and Liam Lee secured their Oxbridge places – Ira is off to Cambridge to read Modern Languages and Liam to Oxford to read History. They will be two of the 25 Hamptonians from their year group joining Oxbridge colleges in the autumn.

In the especially demanding Pre-U exam, taken by Hampton’s Historians and Physicists, an astonishing 59% received a D1 or D2 grade – equivalent to an A* at A Level. Further Mathematics continues to grow in popularity, with almost a third of the year group sitting the A Level and an impressive 60.5% of boys being awarded an A* grade.

The departing Hamptonians will now go on to study the full range of academic disciplines at leading universities. The Headmaster, Mr Kevin Knibbs, was delighted to receive news of the boys’ tremendous results:

“Hampton is an especially joyful place today and there is so much to celebrate together. The hard work of our boys, the support of their parents and the dedication of their teachers have combined to produce these wonderful A Level and Pre-U results, which again seem set to be among the very best achieved across the country. The record proportion of A* top grades awarded to Hamptonians this year is particularly pleasing, but all of our leavers can reflect with pride upon their all-round achievements and personal development during their time here – a Hampton education remains about much more than exam grades. We wish this admirable group of young men every success as they move on to the next stage of their lives.”