Did you enjoy solving my mathematical conundrums last week? I have 2 more for you to try today!

Remember to check out my Previous Questions and the Further Resources tabs if you’d like more mathematical challenges!

Don’t forget you can check your answers on the Maths Wizard Answer tab, but no peeking until you’ve done your best!

So if you’re ready, click on my wand for this week’s challenge!

Here are this week’s mathematical conundrums, kindly proposed by some Upper Sixth pupils:

1) In how many ways is it possible to pick three whole number angles to make an isosceles triangle?

2) I have a circle made of paper. What is the smallest number of folds required to turn the circle into a polygon (a shape with straight edges)?

When you have answered them, or done the best that you can, head over to the Maths Wizard Answer tab to see if you are correct.

Here are the answers to this week’s tricky mathematical conundrums:

1) In how many ways is it possible to pick three whole number angles to make an isosceles triangle?

Solution: The base angles are equal, and can take any whole number value from 1 degree to 89 degrees, so this can be done in 89

2) I have a circle made of paper. What is the smallest number of folds required to turn the circle into a polygon (a shape with straight edges)?

Solutions: Every edge requires a different fold, and every polygon has at least three sides, so the best we can hope for is three. And it is in fact possible to create a triangle with three folds; so the answer is three.

Well done if you worked out the right answers!

The letters A, A, N, N are written on four tiles (one letter per tile), and placed in a bag. They are then drawn out of the bag at random, one at a time, and placed in a line from left to right. What is the probability that the tiles spell ANNA?

How many positive numbers are factors of both 45 and 60?

How many positive numbers are factors of 100 but not 50?

There is a magic plant called the illusium. When an illusium is uprooted, 10 illusium plants grow in its place. In a large field there is a single illusium. No more illusiums will be planted in the field. Is it possible that, eventually, the field will contain exactly 999 illusiums?

Answer: It is not possible

Solution:  It is not possible – every time an illusium is uprooted, the total number if illusiums in the field increases by exactly 9. So the number of illusiums is always 1 more than a multiple of 9; but 999 is itself a multiple of 9.

How many square factors does 300 have?

How many square numbers less than 1000 are also cube numbers?

Solutions: Squares that are also cubes must be sixth powers (some integer raised to the power of six). There are only three such numbers less than 1000: 1, 64 and 729.

Two fifths of a number is 5. Find two thirds of the number.

Solution: The second coin makes two complete revolutions (try it for yourself!), so it turns through 2×360 = 720 degrees

Daria thinks of a number. She doubles it, then subtracts 7, then halves the result, ending up with -2. What number did she start with?

Samuel thinks of a number. He cubes it, then adds 30, then multiplies the result by -1, ending up with the number he first thought of. What is this number?

A palindrome is a number that reads the same forwards and backwards, like 77 and 30903. What is the largest three-digit palindrome divisible by 6?

Solution: A number is divisible by 6 if it is even and its digits sum to a multiple of 3. The largest three-digit palindrome with this property is 888

In how many ways can five people sit in a line on a bench, if two of the people, Alice and Bob, must sit together?

Solution: For the moment, treat Alice and Bob as a single two-headed person. Then there are 4 ‘people’ to arrange in a line, which can be done in 4x3x2x1=24 ways. For each of these 24 arrangements, there are two ways to arrange Alice and Bob – Alice can go to the right or to the left of Bob. So the total number of arrangements of all five people is 24×2=48

A fish weighs 3kg plus a third of its weight. How much does the fish weigh?

In an isosceles triangle, one of the angles is 40 degrees, and one of the other angles is x degrees. What are the possible values of x?

In how many ways can 60 be written as a sum of consecutive positive odd numbers?

Suppose all the arrangements of the letters in the word FACTOR are listed in dictionary order (so the list begins 1 ACFORT, 2 ACFOTR, 3 ACFROT, …). In what position does the word FACTOR appear?

Monica cuts a cake into 10 large pieces. She then takes half of these and cuts them into 3 medium pieces each. Finally, she takes a third of the medium pieces and cuts each of them into 2 small pieces.

(i) How many pieces of cake are there at the end?

(ii) Josh takes one piece of each size. What fraction of the original cake does this represent?

There is a circular table with six empty seats around it. Charlie and Dilshan pick different seats at random. What is the probability they sit opposite each other?

Solution: Wherever Charlie sits, there will be five seats remaining for Dilshan, only one of which is opposite Charlie. So the answer is 1/5

How many primes less than 200 contain a digit 0?

Annie thinks of a number. She triples it, then subtracts 10, ending up with -25. What was her original number?

What is the smallest number divisible by exactly one prime number and exactly six other positive integers?

Solution A number is divisible by 6 precisely when it is even and its digits add to a multiple of 3. So we require the first and last digits to be even. The largest number satisfying the given conditions is 894.

If you really enjoy solving mathematical problems or if you’d just like a bit more practice, here are some web sites you can look at. I’m certain you will find plenty to challenge you!

Click on any of the links to take you straight there.

Here you can try online challenges from previous Junior Maths Challenges, as well as download past papers and solutions.

The NRICH Project aims to enrich the mathematical experiences of all learners. They have lots of activities, questions and games to develop your mathematical skills, whatever level you are. They definitely make maths fun!

Times Tables Rock Stars is a carefully sequenced programme of fun daily times tables practice, which concentrates on a different times table each week. It has a small subscription of £7.20 a year for a family.

As well as these web sites, I can also recommend the brilliant maths book Elastic Numbers, written by one of Hampton’s own Maths Teachers, Mr Griller.

Elastic Numbers is full of fun and challenging mathematical treats for the serious problem solvers among you! It’s available from most book shops and also online. 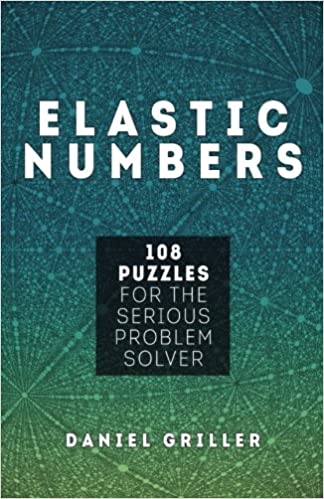