This week, the Second Year got to go on two exciting trips where we had to travel quite a distance to get there! On Monday, we had the Geography trip to Cuckmere Haven which is part of the South Downs, and The Seven Sisters Country Park, for our river topic. After a very long coach journey we finally arrived on the South coast. The River Cuckmere has a very unique and interesting geography, as its lower valley was drained in medieval times for pastoral farming uses such as cow grazing. This means that the river has had a lot of human intervention and that the landscape is therefore not as ‘natural’ at is seems. During our walk, we looked at the features of the river and whether they are features of a ‘typical’ river in its lower course. One of these features is the new straightened channel and the cut-off meanders! In the end, we had to scale a very large hill but got to sit up at the top where had an amazing view of the whole valley, however it was really windy up there and constantly blew at our booklets which we had to fill out! The bus then picked us up again and once more there was a very long journey! It was a lot of good fun. By Lucas (2P) 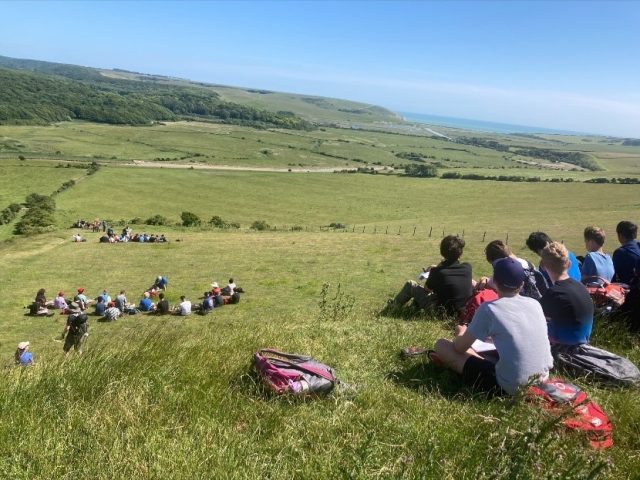 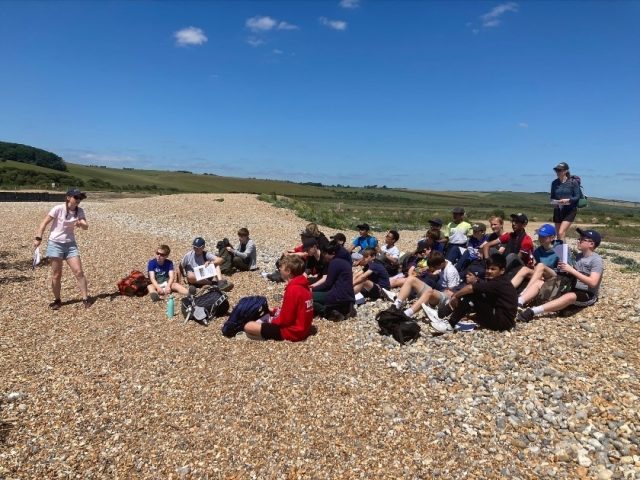 On Monday, the whole of the Second Year went to Cuckmere Haven (National Park) near Brighton and the journey took an hour and a half. Upon arrival, we answered a few questions in our booklet and then started walking. We stopped at various locations where we were able to see the landforms of the river as well as meanders. There were notable things that had been built such as World War Two defences to keep out the German invaders if they landed. We briefly went inside but there was a stench and so everyone left quickly! Towards the end of the journey there was a long climb up the hill which left most of us feeling exhausted and afterwards we completed some sketches of the view that we could see from the top of the hill before heading back to school. By Joshua (2B) 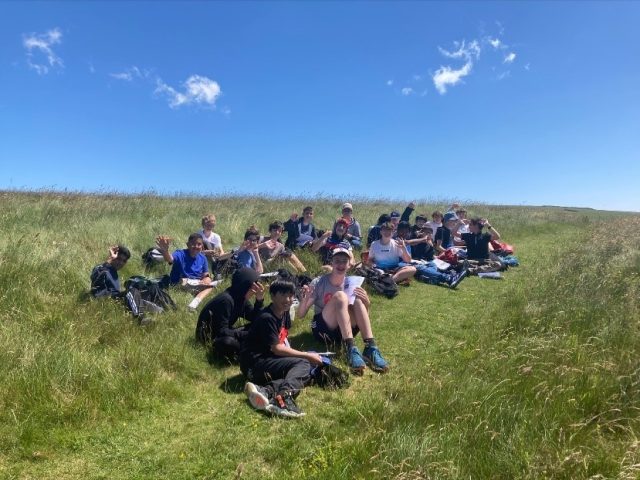 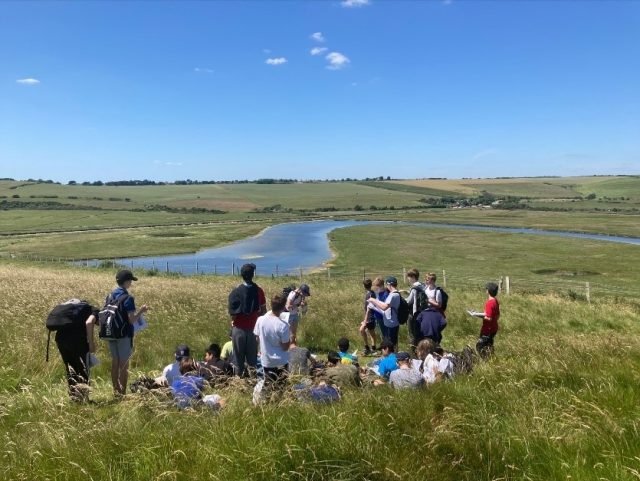 HISTORY TRIP TO THE MARY ROSE

On Tuesday and Wednesday, we visited the Mary Rose Museum in Portsmouth. After a long coach journey, we got off at Portsmouth into the blazing sun. We were then captivated by the shipwreck of the Mary Rose, which was in an air-locked chamber to protect the ship. The Mary Rose was a warship that was built under the control of Henry VIII in 1511 and was the flagship of the naval fleet in Tudor England, and was faster and larger than any other of the King’s fleet. It was also one of the first ships that could fire a broadside, a special type of cannon. However, on the 19th July 1545, tragedy struck when Henry VIII’s favourite ship capsized in the Solent, near to the Isle of Wight. 500 people were on board and only 35 people survived. No one knows what caused the boat to sink. Luckily for us budding historians, the ship was located in 1971 and was raised 11 years later and placed in the Mary Rose Museum, along with several other artefacts that reveal to us about the lives of the Tudors and about Tudor society, as a whole. We thoroughly enjoyed the trip, and we thank Mrs Havord and the other history teachers for organising the trip. By Joshua (2J) 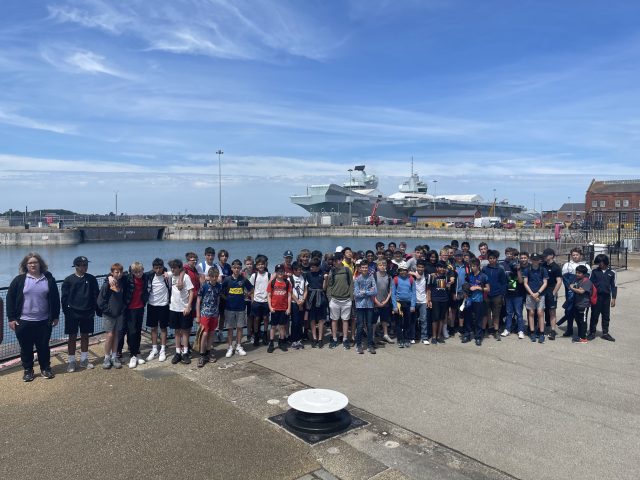 On Tuesday, three of the Second Year classes embarked on an hour and a half long history trip down to Portsmouth Harbour to see the Mary Rose, a ship built during the Tudor times that sunk in 1545 after a battle with the French near Portsmouth. There are many possible caused that resulted in the sinking of the ship which we looked while in the workshop. Most of the people in my class felt that the Spanish report was the most reliable (that being that the ship overturned and sank) yet I thought that the ship being hit by a cannonball was a more likely possibility. After a quick lunch, we went into the museum to look at the remains of the Mary Rose that had been dug up 40 years ago. The place was dark to ensure that the wooden remains of the boat would not rot. Then, after we had finished the museum tour we headed back towards the bus and went back to school. By Joshua (2B)

Congratulations to Aiden (2H) who raced in his first regatta at the weekend. Aiden raced for Kingston Rowing Club in the J13 coxed quads event, at Thames Valley Park regatta. They won each of their rounds to make it through to the final, where they beat a crew from Guildford RC. What a great achievement at your first regatta, well done! 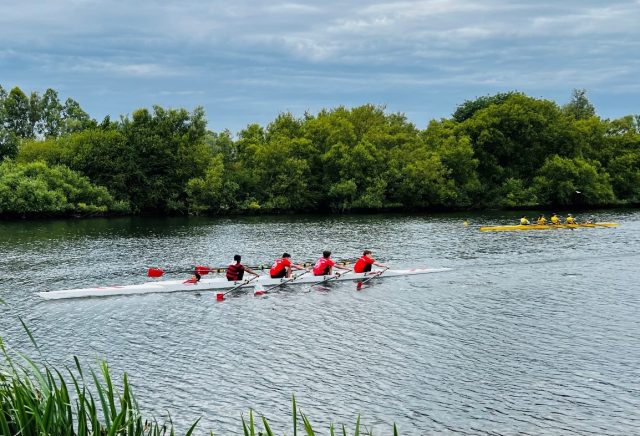 On Monday 27 June, we will be holding the interform indoor rowing competition. Each form will race for 20 minutes with as many boys participating as they wish and the form who rows the most metres will be the winner! Come along and have a go or just support your classmates.

Throughout the Covid-19 pandemic, we’ve seen all the wonderful benefits technology has to offer; but with issues such as inappropriate content, misinformation and abuse increasing at worrying rates, it’s never been more important to know how to protect young people from online risk. For this reason, we have invited back the leading online safety organisation Digital Awareness UK to deliver an online safety webinar to help our parents feel empowered about keeping their child safe online.

If you are interested, please sign up for the webinar here. Could we kindly request you do not forward on this event invitation outside of the Hampton School parent community. If you have any questions about the webinar, please contact me at g.haynes@hamptonschool.org.uk.

We look forward to seeing you at the webinar!

Welcome to the Weekly Questions! Every week, we’ll post 10 general knowledge questions, and, if you have a go, you can be awarded a merit if you send your answers to Miss Kugele (r.kugele@hamptonschool.org.uk)! This week’s questions are: