Last weekend was full of excitement for one lucky group of Second Years who attended the Water Sports Trip in Poole, Dorset. It was also an eventful weekend for our cricketers who enjoyed another set of fixtures against Reed’s School. Next week brings your summer assessments, the Second Year team wish you all the best of luck and remember we are all here to support you!

On the 14 and 15 May, 34 Second Year Hamptonians went down to Poole Harbour in Dorset to try out water sports at Rockley Point. We stopped at services halfway through the journey – where everyone bought sweets! – and then we went to “The Lodge”, where we would be staying in Rooms of five or six. We then went down to the sailing school, where we were split into two groups.

My group did windsurfing first, where we learnt the technique to get the sail up and moving. It was really fun, except for the ice cold water! After that, we had a quick lunch break, and got right back to it with pico-sailing. Here, we set up our picos, and were towed out of the sailing school into deeper water, but not before Billy and Maxwell managed to capsize their pico before we left the school!

Then, we were told to set up our sails (where Aaron had a little fall into the water) and sailed around, setting a clear target and using the mainsheet and the rudder to navigate. We were then towed back to shore, and on a beautiful day like Saturday, it was a rather pleasant journey. In the evening, we watched the FA Cup Final, filling the Lodge with roars and cheers, before heading down to the beach to do some crabbing and play beach football. All in all, Saturday was a great day.

Sunday’s weather was not so kind. In the morning we tried kayaking, whilst it was rather cold and rainy. Kayaking involved paddling with double sided oars in boats of two. Whilst fun, the weather somewhat ruined the experience for all of us. We then went in for lunch, and came back out an hour or so later to do stand up paddle boarding (SUP), which involved standing up and paddling on an inflatable board. There were six boards of two and one Mega SUP, which had space for eight people. Coming back to shore was quite hard, as the tide was coming out and so we had to work extra hard to get back to the beach. After that, we headed back home – this time without everyone buying sweets! Thank you to the staff at Rockley Point for making the trip happen, thank you to Mr Clarke and the Adventure Society for arranging the trip, and thank you to all the staff who took us there. By Ben (2J)

Take a look at some of the action from the weekend:

The rowers experienced their first proper water session on Monday. We went out in octuple sculls (octos) which have eight rowers and a cox who is ‘captain of the ship’, steering and giving commands to the rowers.

We enjoyed a really productive learning session despite a fairly strong breeze. The coaches were impressed that everyone managed to manoeuvre the boats successfully a couple of the crews even managed a lap of the island.

Some of the Second Years started on the rowing machines learning some technique and then competing in a relay race, before swapping into the rowing boats.

Below you can see one of our crews with boys who have had some prior rowing experience attempting a balance and timing exercise. The balance was great, the timing perhaps need a bit of work!

Take a look at the winners reading a short extract from their story here:

Last weekend, the U13 cricket teams all had fixtures against Reed’s School at home. The game against Reed’s started at 9.30am and we lost the toss and as a result were asked to bat. I opened with Farris and managed to get 25 runs before falling at the start of the eighth over; by that time, we had managed to get to 69 runs. Shortly after Farris fell but Alfred and Rio managed to bat on to the end of the twenty overs at which point we managed to get 146-2. Not long after Reed’s began their pursuit. However, we managed to get a few early wickets until a good partnership happened but before long we once again got another wicket. Towards the end it began to get tense with them needing 39 runs from the final four overs. Ten runs from the 17th over, ten runs from the 18th over but then Farris bowled an amazing over giving away only 7 runs, leaving Reed’s with 12 runs needed off the final over. I had to bowl the final over. The first ball was a dot but the next ball, they managed to hit a four leaving them with nine runs required from four. The next ball was a dot and the next was a dot again, followed by another. Victory was already secured with one ball left to play and, in the end, we won by 7 runs. The A team and the B team also lost narrowly, both of the final ball of their game. By Joshua C (2B)

Wishing our U13A Footballers the very best of luck in the ESFA Final next Tuesday. Kick off is at 3:30pm and the match will be live streamed from West Bromwich Albium’s ground The Hawthorns. 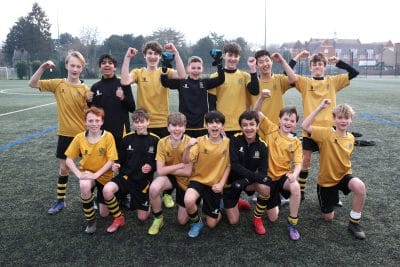 The careers extravaganza continued on Monday with a session on identifying interests and competencies. The aims of the session were to: (i) equip pupils with some career literacy and to reflect on different skills/competencies, and (ii) help them to reflect on what they might wish to find in a job. The boys really enjoyed the chance to think about their interests and what skills they have, and how these might steer them down a certain career path. The 12 skills or competencies that we looked at were:

The final session on Thursday built on Monday’s sessions, and gave the boys the chance to discuss and research dream jobs. The boys selected two or three jobs that they might be interested in and discussed what might be good about it, what they might not enjoy about it, and what skills or competencies it might require.

A copy of the assessment timetable is on display in Form rooms. Some key points for the week include:

A copy of your timetable can also be found on firefly here.

Hampton is organising a golf competition for various schools in the borough and we would like to enter some boys from the First, Second, Third and Fourth Year if possible. The competition will take place on the afternoon of Tuesday 21 June, at Fulwell Golf Club.

If you are a golfer and would like to put yourself forward, please email s.may@hamptonschool.org.uk, or find Mrs May in the German office. You would need to own your own clubs, be familiar with golf scoring and etiquette, and have experience on a full-length golf course. We probably can’t take everyone who is interested, but please feel free to contact Mrs May for info.

Welcome to the Weekly Questions! Every week, we’ll post ten general knowledge questions, and, if you have a go, you can be awarded a merit if you send your answers to Miss Kugele (r.kugele@hamptonschool.org.uk)! This week’s questions have been set by Akshat (2J)