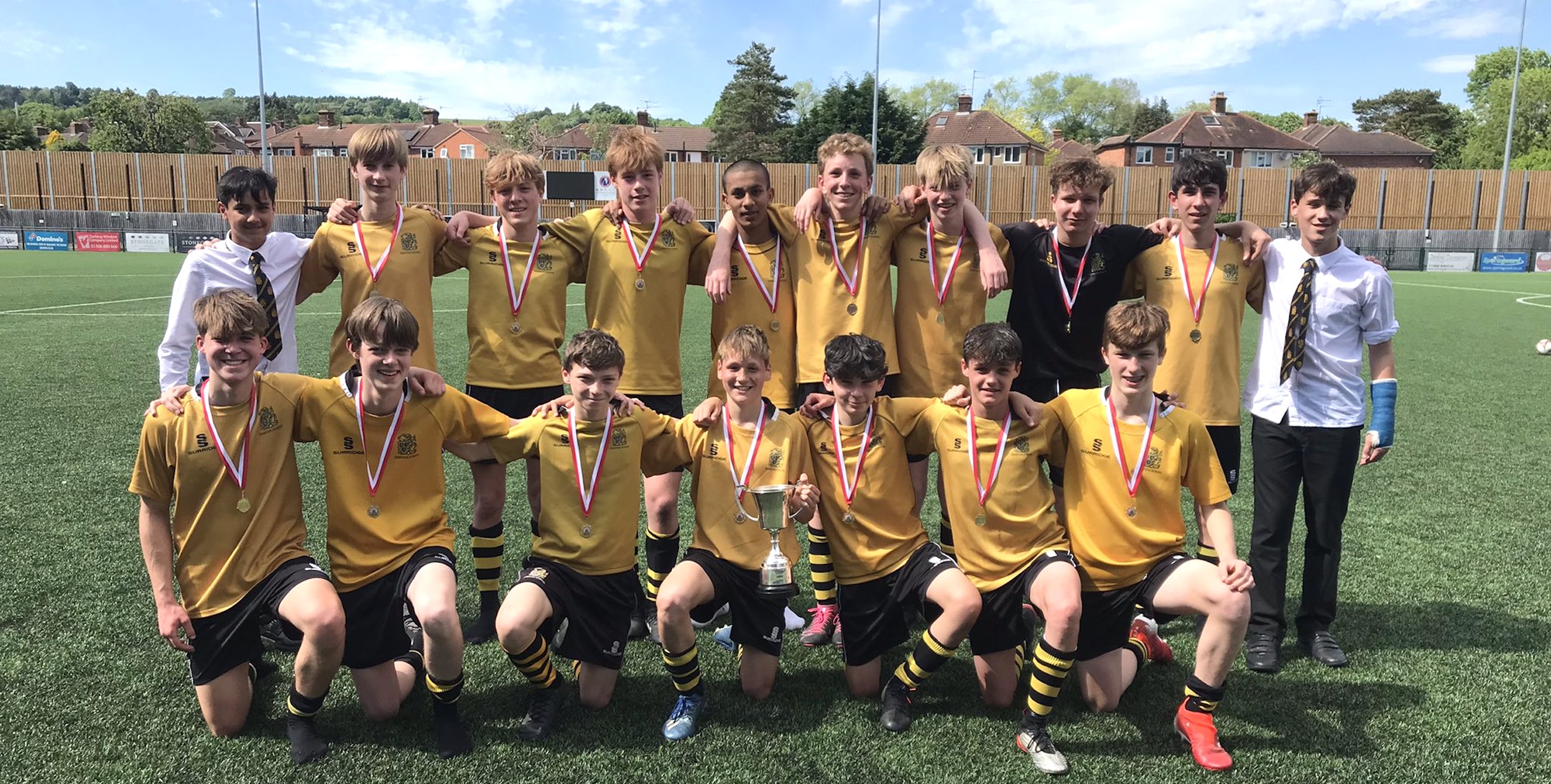 The half term break is on the horizon, but there is no sign of slowing down for Third Years with a busy week this week and final preparations for assessments underway. The week started with a bang when those Third Years who study French made the short journey to LEH to watch a play in French. The early sports events of the week saw our tennis players in action, comfortably winning their match against Howard of Effingham, as well as the U14A Football Team playing their long-awaited County Cup Final – you can find out the result of that in the Sports Round Up below.

Good luck with the finishing touches to your revision over the weekend!  Please do remember that this is just a practice run and the most important thing is to use it as an exercise to refine your revision technique for the years to come. If things go well then that’s great, but equally if they don’t, at this stage it’s not the end of the world. Remember to allow yourself time to decompress and relax in what is likely to be a busy and potentially stressful time…and once you’re through the week, it’s half term!

Good luck to those who are representing Hampton over the weekend.  Enjoy reading the rest of the blog and I hope you have lovely weekend!

We have asked all Third Year pupils that joined the school in September 2021 (13+ joiners) to take their school iPad to the IT office as soon as possible to log any claims for damage or issues with the iPads, ahead of returning them. If boys are unsure about potential issues or damage, they should go to the IT office to clarify, rather than not act.

Arrangements for the return of School owned iPads and collection of the new laptops will be sent separately, but we can confirm that this process will take place during the second half of this term for all Third Year pupils.

Whilst we hope that all Third Year pupils have worked consistently over the past two or three weeks in preparation for the assessments next week, we really want to emphasise the importance of keeping the assessments in perspective. They are part of the learning process, not an end in themselves. We only ever ask that boys take these assessments seriously, engage in some revision, and do the best they can on the day. After that, the results are less important than the lessons learned as a result.

Each pupil should have received an email to their School email account with a personalised exam timetable (now including Biology). Pupils are expected in School throughout the assessment week (there is no “exam leave”) and revision takes place during any free sessions.

We encourage all pupils (and parents) to monitor their wellbeing throughout the week, and speak to Form Tutors, the School Nurses, or Heads of Year if you are having any difficulties.

Our match against Reed’s was a great success for the U14A team. Reed’s showed up with hopes of winning and backed themselves to bat first after winning the toss. The game got off to a great start when Raphael T got the first opening batsmen out for a low score. Aaryan D then did a great job of keeping the pressure up from the other end. Eventually, the other opener faltered and Raphael T claimed wicket number two. With both openers out, the pressure was on Reed’s to change the tide of the game. They could not manage this however, and a few great overs from Zaid A and Adi S, who got two wickets each, led us to keep Reed’s down to a relatively low score. Now it was Hampton’s turn to bat. After a rocky start, it was up to Aziz M and Rohan P, who managed to win the game for us by hitting a combined score of 116 – Aziz top scoring with 73 runs. Overall, it was a great performance from the whole team and a good result before facing Brighton College next weekend.

On Tuesday, the Hampton U14A footballers played their last match of the season: The County Cup Final. Our opponents for the final were Grey Court School, a team that we have had close encounters with before, and the game took place at Dorking Wanderers Stadium, Meadowbank Lane. The match began with both teams keeping possession of the ball well, which resulted in not many opportunities being created. The game opened up towards the end of the first half as players from each side were affected by the heat.

The closest Hampton came to scoring were from two long shots, by Angus H and Nick A, which narrowly went wide. After a fairly even half, the boys regathered in the changing rooms and the message was to move the ball quicker, in order to create more opportunities and wear our opponents out.

However, not long after the second half began, Hampton went behind when Grey Court’s left winger buried the ball into the bottom right corner. The boys responded instantly when Dexter B slotted the ball into the net and the score was level again. Quickly after, Hampton doubled their lead from a usual occurrence throughout the season: a corner. Ollie S floated the ball in, Nick A headed it back across the face of the goal and Quinn S placed it in with ten minutes to go. All Hampton had to do now was to hold on to their lead, which they did. The boys finished their season in style by winning the County Cup Final – well done! 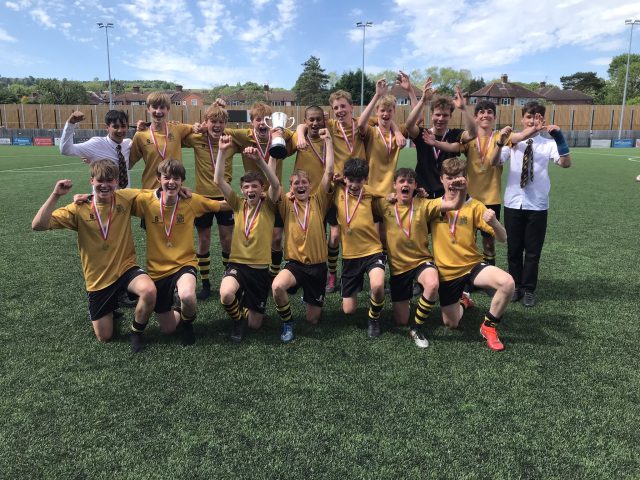 The rowers competed at Thames Ditton Regatta last Saturday and enjoyed a hot and sunny day of racing. We rowed the boats down through Molesey Lock very early in the morning and then prepared for the racing.

Our A crew were just one length slower than Radley in their heat, which put them into the Plate event. Picking themselves up well after the defeat, they went on to comfortably win the Plate semi-final and then final, earning the Plate event medals.

Our B crew showed that they have picked up a lot of speed over the last few weeks. In their previous race one month ago, Radley’s B, C and D crews were all faster than us. We drew Radley B in the heat, and a really gutsy performance saw a win for Hampton by a canvas (about a meter). The semi-final was against Radley D and was a much easier race with a large winning margin. In the final we came up against Radley C who were just slightly quicker than us so we lost by just ¾ of a boat length over the 900 meter long course. This is a huge improvement from earlier in the season.

The video is taken from about the half way point in the B crew’s final race against Radley C.

Next Friday is the National School’s Regatta at Dorney Lake. Our A and B crews will be competing against the best crews from around the country.

On Monday 16 May, all of the French language pupils in Third Year went to LEH to watch a play in French. The play was about a girl called Helene and her birthday, when she doesn’t get what she wants. She wishes for better presents and a cooler family but when her wishes come true, she regrets her actions and misses normality. Also, her friends have fallen out over a boy and she is the mediator. As we have exams soon, this was a fun way to relax, do something different and also to practice for our listening exam!

On Monday, the Third Year French learners enjoyed a wonderful play at LEH, performed by Onatti Productions. It was called ‘Mon père ne me comprend pas’, which means ‘my dad doesn’t understand me’. It followed the story of a French girl’s sixteenth birthday, in which she had to console her friends who were having an argument about a boy, and deal with her annoying family. So, she made a wish to have a cooler family, but then it started to come true. She started to regret making this decision, so she managed to reverse the spell and was grateful for all the little things in life. I enjoyed this play very much due to its interactivity and its humour.

Hampton is organising a golf competition for various schools in the borough and we would like to enter some boys from the First, Second, Third and Fourth Year if possible. The competition will take place on the afternoon of Tuesday 21 June, at Fulwell Golf Club.

If you are a golfer and would like to put yourself forward, please email s.may@hamptonschool.org.uk, or find Mrs May in the German office. You would need to own your own clubs, be familiar with golf scoring and etiquette, and have experience on a full-length golf course. We probably can’t take everyone who is interested, but please feel free to contact Mrs May for info.

Club of the week

During Thursday break time, I have been enjoying going to Chess Club. Last week, I participated in two chess matches against other Hamptonians and managed to win one of the two. I enjoy Chess Club because the chess matches stretch your mental capabilities and chess skills while still being a relaxed environment that welcomes players of all skill levels.  Whether you have played before or are completely new to Chess, I’d recommend coming along and joining in with the fun!

Last week Mr Lees gave us two truths and a lie – well done if you guessed that Mr Lees having a non-identical twin was a lie…which would obviously be the case with a twin sister anyway!  Third Year Head of Year Mr Rigby is up next…can you find the lie?

Well done to the 23 Hamptonians who had a go at last week’s Connection Corner. It was tricky Connection last week and nearly all of you said either places in Central London or Tube Stations. The correct answer was Monopoly Board locations. Big shout out to Monty S, Oliver D, Will M, Alex R, Pedro CM, Thomas T-S, Thomas W-M and Daniel F who all guessed correctly.  Don’t forget to collect your merits!

Where would Harry Potter would catch the Hogwarts Express from Platform 9 3/4? Kings Cross Station

In which battle did Admiral Lord Nelson die? The Battle of Trafalgar