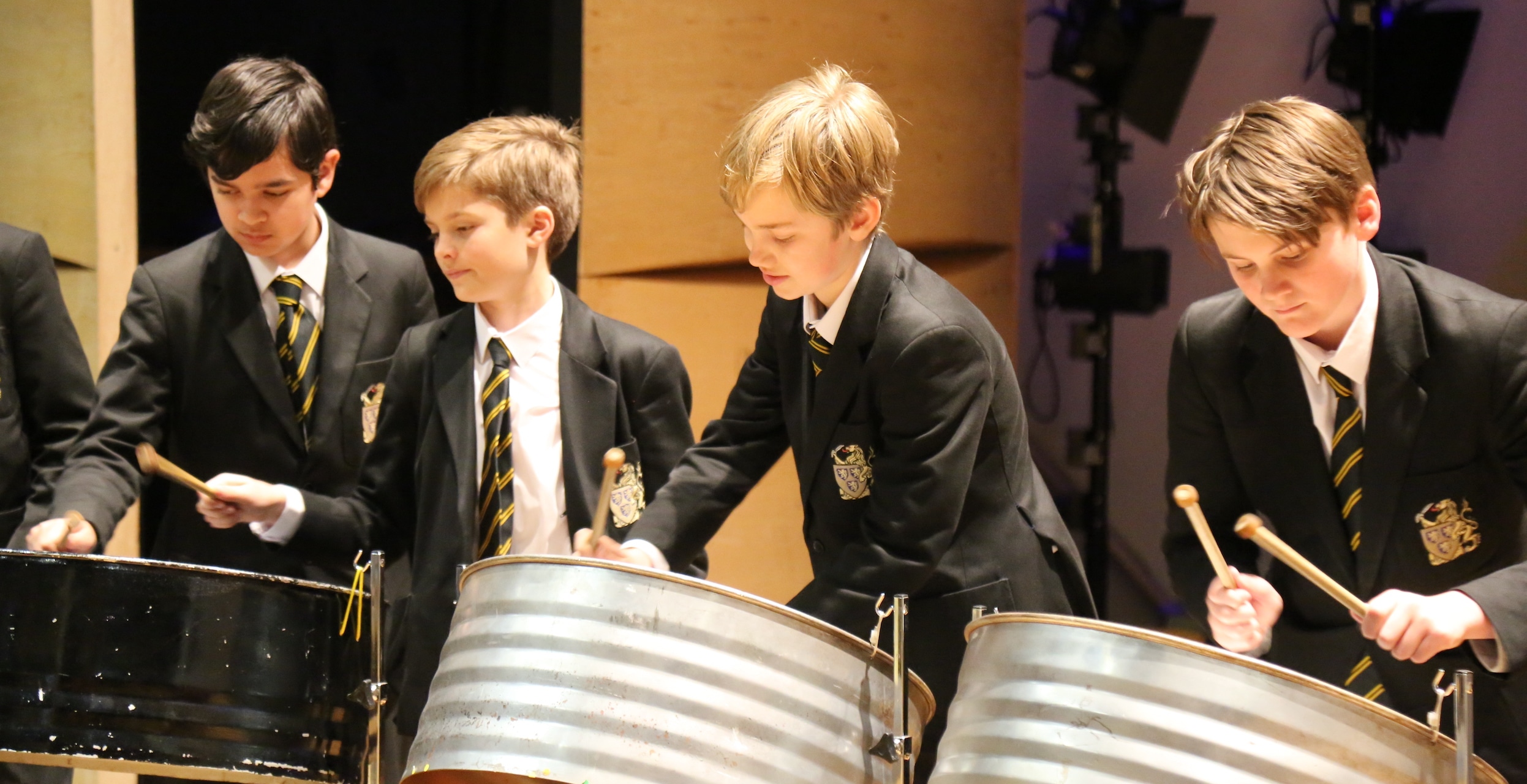 The end of another great week for our Second Years! The highlight this week has to be the Steel Band Workshop on Wednesday which was thoroughly enjoyed by everyone.

On Wednesday, every form in Second Year were treated to a magical music workshop all about Calypso music and the steel pan drums. We went to the Hammond Theatre and were bewildered by the unusual array of musical instruments before us. We were soon introduced to the steel pan, a musical instrument which is carved out of an empty oil barrel to make a variety of different notes when struck, and the Cajon, a wooden box which acted as a bass and snare for the steel pan melody. We were soon playing, and the workshop leader got us playing a series of chords to a Calypso rhythm. The chords were C, F, G, F, and he at last introduced to us that this was the chord sequence from the world-famous song, ‘Hot, Hot, Hot’ by Lord Arrow. We also learnt that composers from Trinidad and Tobago, the country of origin of the steel pan, used very grand stage names, such as ‘Lord’. Everyone really enjoyed this experience, and thank you to the Music Department for arranging the workshop. By Ben (2J)

Take a look at the video below to get a flavour of this week’s music workshop:

A huge thank you to the Hampton School Music Society for funding this wonderful workshop for our Second Year pupils.

On Monday the rowers went down to the boathouse for the first time. The session introduced a lot of new skills including how best to stay upright! To give an idea of what we are aiming for, by this time next year we are hoping that the boys will be of a similar standard to the current Third Year rowers who can be seen below at the start of their silver medal performance at The Junior Sculling Regatta.

We are also improving strength and fitness with our body circuit on Friday lunch times, joining in with the Third and Fourth year pupils.

On Saturday the U13 A, B and C teams enjoyed their encounter against Dulwich College with two losses and a win. I was in the A Team and we were playing Round 1 of the National Cup after winning the Middlesex Cup last year but unfortunately the first game did not go our way. We were put in to bat in preferable bowling conditions, and despite a good solid five overs, we collapsed from 15-0 to 15-3. We never looked like recovering from this position, and despite some small partnerships in between we ended up 68 all out after 24 overs, with Alex Watson top scorer with 13 runs. With the bowling, we got an early breakthrough but then a partnership of 60 runs, the game was over. We still showed some fight with two splendid catches by Akshat N and Aditya K, and an absolutely stunning one-handed catch by Stanley A, but the game was over and they won by six wickets, and with twelve overs to spare. Of course, this was a disappointment to be out early in the National Cup, but we look forward to more games later in the season, and maybe performing in the Middlesex Cup again.  By Aditya K (2B)

On Saturday, the U13 A, B and C cricket team embarked on an hour-long journey to Dulwich in South London. The A and C team both lost their games whereas the B team fared better. The C team encountered a strong batting team who managed to get early runs before one of their opening batsmen had to retire at 30 runs. They hadn’t lost a single wicket until they were past halfway in their innings. A change in bowling resulted in a few wickets falling with Nick (2W) taking three wickets and others taking one each. At the end of the 20 overs, they finished on 156-6. Unfortunately, we lost an early wicket. I batted at number three and got bowled for 13 after Harrison had to retire at 30 runs. At that stage, our run rate was nearly at 10 an over but began to decrease shortly after. We needed 19 in the last over but lost our final wicket with a couple of balls remaining. The end result was that we lost by 15 runs but we have another fixture against Reed’s this Saturday. By Joshua C (2B)

Do you have some free time on Wednesday lunchtime? Are you interested in coding and computing? Well come down to Coding Club! Coding club happens in the second half of lunchtime on Wednesday. You can learn how to code or continue doing a project you are already doing. Furthermore, you can come down and get into coding! It’s really good and a great experience to learn. Just don’t come down and start playing Minecraft on the computers! The club for that is on Friday! By Lucas (2P)

On Thursday, Second Years had the first of three lessons on Careers! This week was about Careers Myth Busting. The session looked at ten true or false statements about careers. Everyone really enjoyed the opportunity to discuss the different misconceptions they might have had about careers, universities and subjects’ choices.

Science (STEM) graduates find it much easier to get a job than humanities (Philosophy, English etc.) graduates. TRUE/FALSE?

Welcome to the Weekly Questions! Every week, we’ll post 10 general knowledge questions, and, if you have a go, you can be awarded a merit if you send your answers to Miss Kugele (r.kugele@hamptonschool.org.uk)! This week’s questions have been set by Joshua (2J) and Alex (2F)