Two and half weeks until the Christmas holidays and next week is December – time flies when you’re having fun! The Third Year boys enjoyed an engaging Assembly this week in which Dr Hendry spoke about human impact on coral reefs, and we found out which Form Charities we will be supporting this year.

On Thursday, it was our second lesson on oracy and the boys were intrigued by how you can use varying methods of communication to get your point across in a debate. They even came up with their own sound bites on topics of their choice to capture the attention of their classmates, and some of them were incredibly catchy!

Congratulations to form 3B for winning the Interform Chess tournament this week. Thanks to Mr Haynes, Mr Moore, and the Third Year Mentors for organising the tournament, and to all the boys who took part.

Further to Mr Wilkinson’s presentation to the boys last week, we hope that many Third Year pupils will consider signing up to complete a HELP Level 2 project this year. A reminder that it is expected that Academic Scholars will complete a HELP project.

We hope you enjoy the weekend.

Our resident climate conference expert, Trivikram P, has produced a superb summary video of the goings on from COP26. Excellent work, Triv!

You can watch the video here:

3B emerged victorious from our latest round of the Third Year Inter-Form competition, as they showed their prowess in the sport of Chess! 3D were worthy runners up in a closely fought contest and the competition continues in the next couple of weeks. The latest scoreboard shows an extremely tight affair still, with only 7 points separating all the Forms!

The Hampton Extended Learning Project (HELP) Level 2 was introduced to the Third Year boys by Mr Wilkinson recently and more information can be found on Firefly:

HELP projects are strongly encouraged for Academic Scholars, but all boys with a keen interest in exploring a particular topic or field in more detail, alongside their academic studies, are encouraged to apply. The deadline is coming up (Friday 3 December), so get those proposal forms in!

A huge well done to Ted Killick-Steele who returned to his old prep school last week to deliver a speech to pupils on anti-bullying. Ted spoke with confidence and was a fantastic role model for the Falcons Prep School boys, who listened intently throughout.

In his speech, Ted said,

“One way people can feel bullied is exclusion. You may not realise it in the moment, though simply not letting someone play with you at break or sit with you at lunch can really affect them.”

There were plenty of other useful tips and advice that Ted was able to pass on to the boys at Falcons, and I am sure that they all learnt something from his talk. Congratulation on making a real difference, Ted!

On Tuesday, the U14 table tennis team including: Shane K (capt), Henry J, Arthur C and Richard P went on to win the Richmond Borough Championships. Let’s hear more about it:

In our first tie, we were put up against Richmond Park Academy A team and it came down to the wire when Richard P won a tense match for a 4-4 draw in overall matches. After establishing that even the total number of games (up to 11 points) were equal, count up of points revealed Hampton won by around 20 points! Hampton was pitted against Turing House for the final of the competition and we were dominant, just losing one match in total and securing a victory and safe passage to the next round. Well done to all the players, and a special mention to Shane K and Richard P for winning all of their matches. 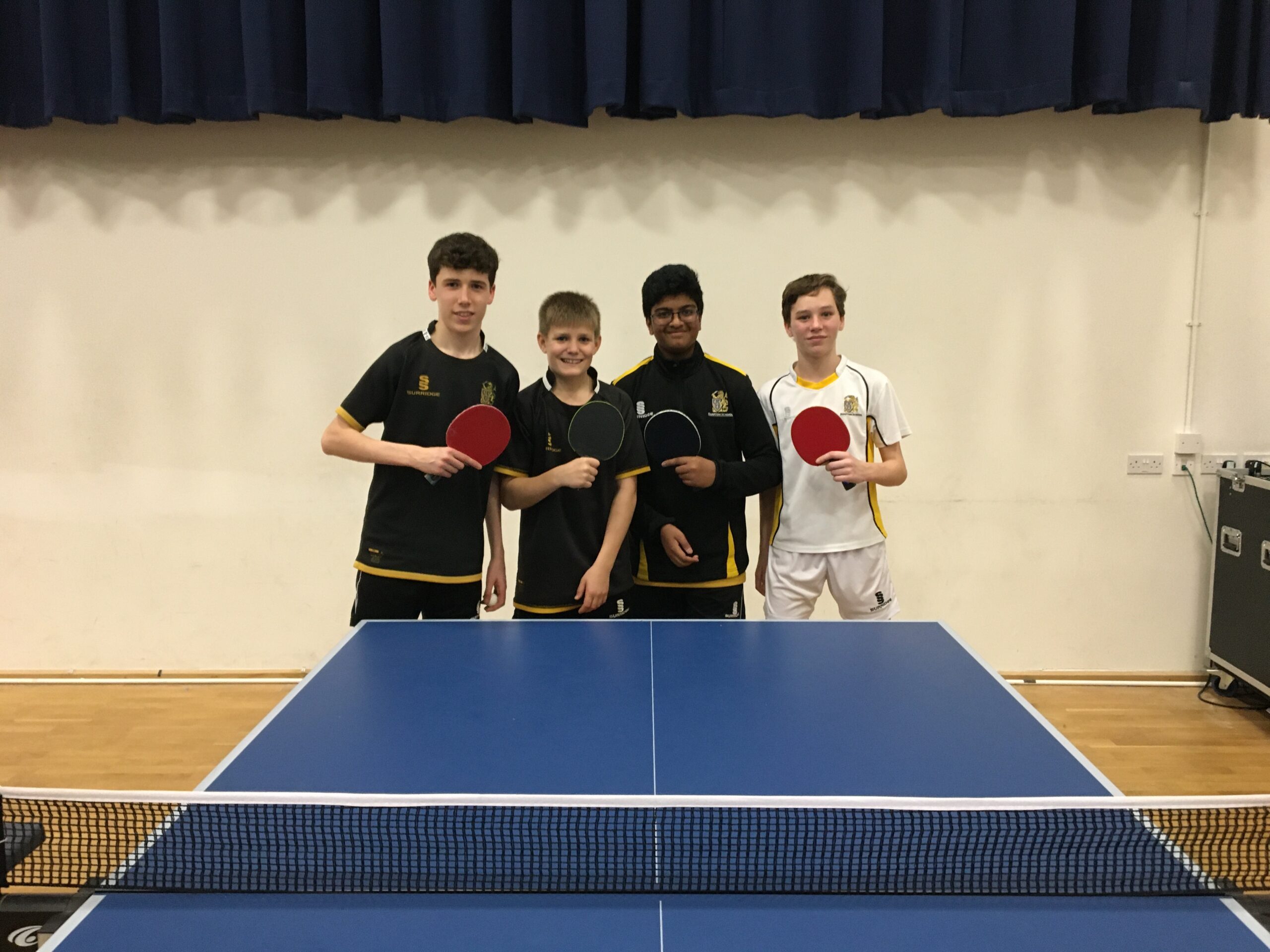 Many congratulations to our U14A side who progressed to Round 5 in the ESFA Cup competition on Tuesday after beating Queens School in extra time! They will play either Kingston Academy or Eden Park High School in the coming weeks.

The U14As were also successful last weekend in a block fixture against Royal Russell, as they won 1-0. The U14Bs played a thriller of a match against the A side from Chigwell and only narrowly lost the game, 4-3, after some great goals from Jeff L, Joshi RdM and Michael DiS. Great effort, chaps!

Another report from HSC, this time from budding sports reporter Jayden O. Take a read here. Sounds like a great match!

The Smoothie Bike is back at Hampton again! Have a go on the Smoothie Bike and enjoy some tasty creations. The wheels start turning at 7:45am on Wednesday 1 and 8 December in the Dining Hall! 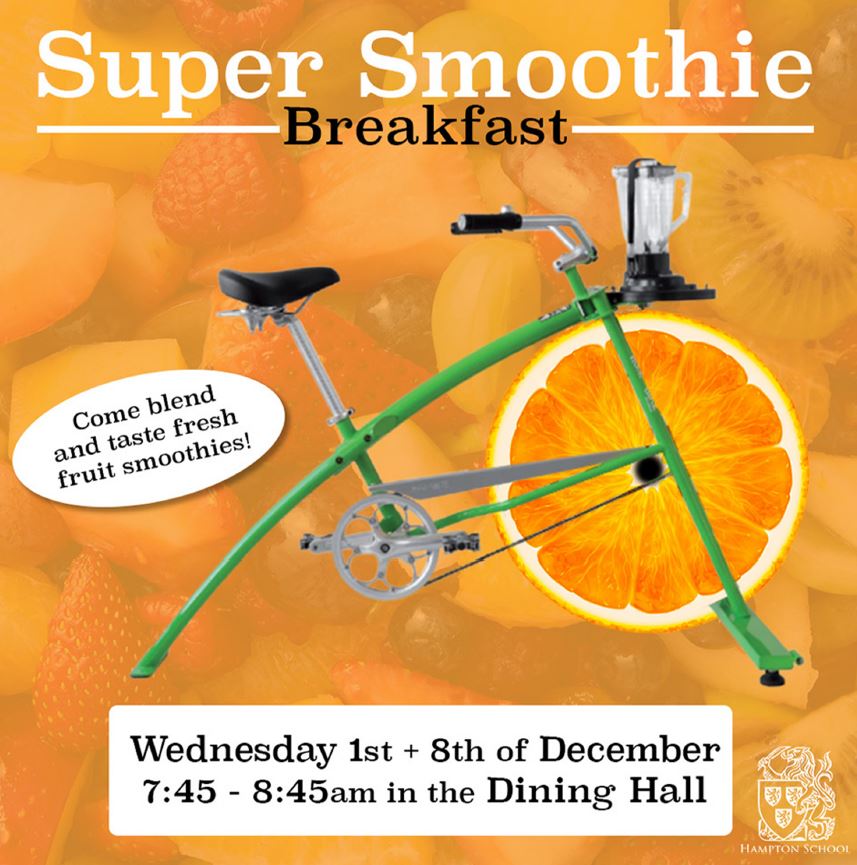 Well done to all of you who correctly answered last week’s Classics question. Only seven of you knew that Ancient Greek and Roman culture spans 1600 years. A big shout out to Trivikram P, Zaid A, Leo M, Zaidan A, Oscar L, Ben W and Ethan Q.

For the chance to earn another merit… This week’s question is a true test of your quiz knowledge!