It has been another fun-packed week, with the first interform competition, form charity events, COP26 pledges and computing challenges to name a few! It is fantastic to see so many of you getting involved with co-curricular activities and the wider school community. Please do continue to keep making the most of all the opportunities that come your way!

Our weekly interviews, are a great opportunity for you to find out a little bit more about your Tutors! So, thank you to Kanishk (2W) who interviewed Mr Hooper; PE Teacher and one half of 2W’s Form tutor team! 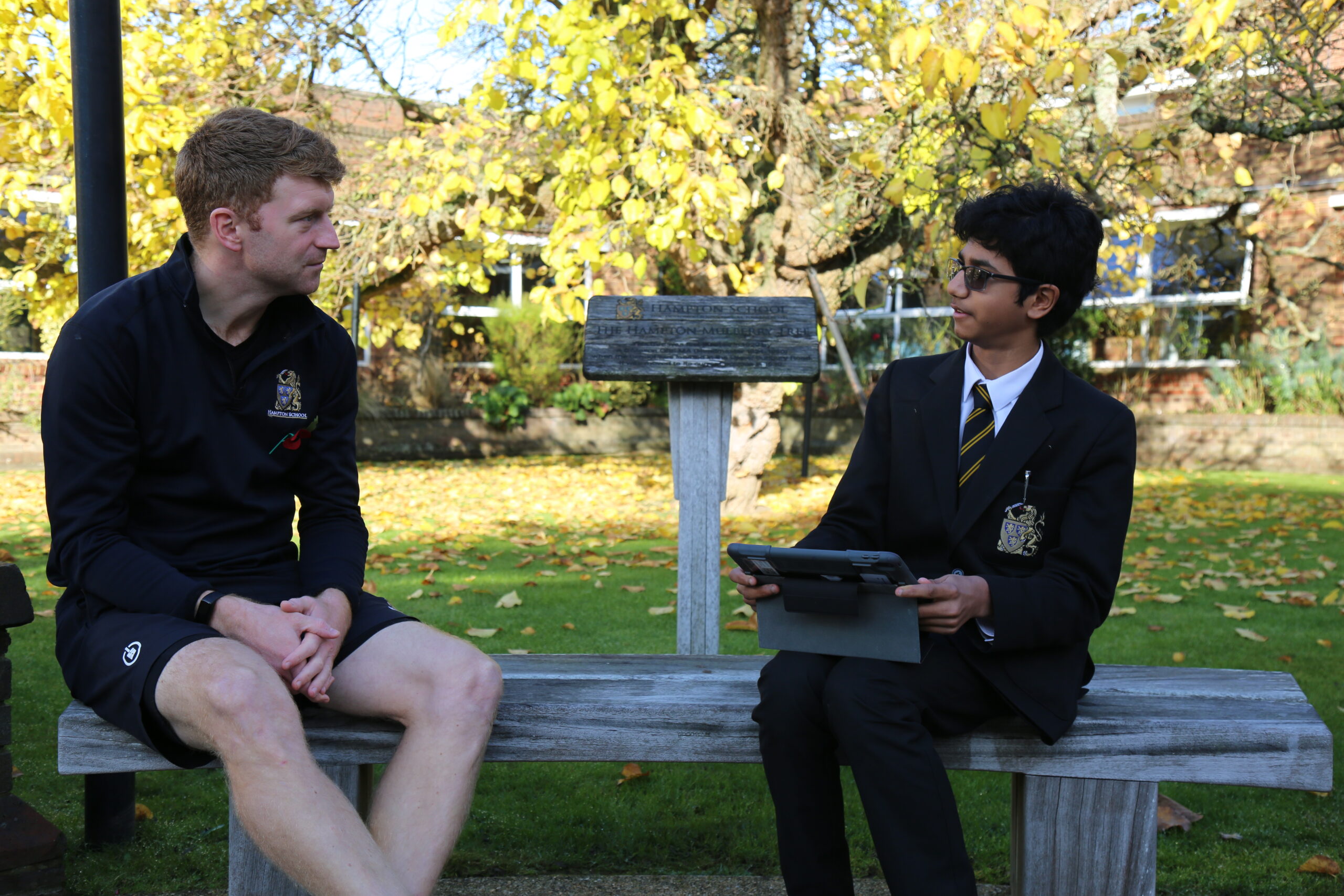 What subjects did you enjoy at school?

Tough one, PE and I enjoyed using my hands so I enjoyed DT but I also enjoyed Maths.

As a schoolboy, what did you want to be when you grew up?

I was inspired to be a cricketer, but I really had no particular pathway.

What got you into teaching?

What are your aspirations for the future?

After COVID-19, I am always thinking about the future and I am very conscious of health and happiness but apart from that, I am undecided. In my opinion, more important things can come out of the blue.

If you could go back in time and tell one thing to your younger self, what would it be?

Be open to trying things, not to make excuses and be open to challenges.

What is your favourite food?

Tough one, it changes often but right now it is probably Thai red curry with rice.

A controversial topic but what is your favourite dessert?

I know as a P.E teacher I should be saying fruit, but I have a sweet tooth so probably sticky toffee pudding!

Who was your role model as a child?

For me, my father was a big role model.

If you could teach another subject, what would it be?

I like hands-on activities so I would probably say Chemistry with all its experiments!

Climate change is a topic that we have recently been thinking about. Climate change will truly affect all of us, in so many different ways and forms. COP26 is happening in Glasgow, which will bring parties together to accelerate action towards the goals of the Paris Agreement and the UN Framework Convention on Climate Change. In Monday’s PSHE lesson, we were asked to create climate pledges: a pledge to help our environment. Examples include eating less meat, or to stop using single-use plastics, or to stop leaving the tap on when we brush our teeth! This year my parents and I are getting an artificial and reusable Christmas tree. Photos were taken of pupils, with their climate change pledge, and these photos will be used to create a large collage. By Joshua (2J)

This Monday, during our PSHE lesson, we learnt about COP26. COP26 stands for United Nations Climate Change Conference which is taking place on Sunday the 31 October to Friday 12 November 2021. It is all about what is having the biggest impact on the environment and how we can change that. The Hamptonians were taught about what consumes lots of energy and what wastes precious water. They were also told how to avoid those things and help the environment! Finally, we took pledges on what we will change to help out like shorter showers! By Lucas (2P)

As COP26 draws to a close, it’s important to remember that small changes can make a big difference. Here are some of our pledges that the Hampton community have made since the start of the conference:

On Saturday, the Hampton Football U13 Bs, Ds and Es travelled away to Lingfield College to play their As, Bs and Cs respectively. It was a wet day, and the pitches were muddy, with a strong wind, making for difficult playing conditions. Our Bs brought home an emphatic 3-0 victory against Lingfield’s As, so many congratulations to them. The Es managed to scrape a 0-0 draw after a disallowed goal from the home team for offside, and tightened their defence to hold out the match. Unfortunately, the Ds suffered a resounding 7-0 defeat against the much stronger Lingfield Bs. After conceding an early goal in the first half, we had a few attacks that sadly lacked the end product. However, starting the second half only a goal down, with the wind now behind us, we were confident we could level out. However, as fatigue kicked in, we conceded 6 more. In contrast, our attacks did have more sting, with a shot from Arish slipping just wide of the right post. And, after an amusing moment where Aaron tackled fellow Hamptonian Prabodah and a Lingfield midfielder sent a rocket into the top corner, the final whistle blew. Even though we did sustain a few injuries, we enjoyed the experience and all took away some valuable lessons. By Ben (2J)

This match went down to the wire with chances, some debatably not given fouls and a disallowed goal in the last ten minutes of the match. However, this thrilling game resulted in a somewhat dissatisfying 0-0 draw.  There were 25 minutes each way, which allowed for a nail-bitingly quick game. Early on the ball stayed planted firmly in our half, mainly because one of the other players cleared it at every chance he got.

However, this didn’t prevent a few quick breaks and counter-attacks in the second half. The climax of the match came when a Lingfield player scored in the last ten minutes of the match but it was disallowed soon after. The last few minutes of the match involved a few desperate attacks on our part and some corners for the other team, most of which were heroically saved by our keeper, who probably rescued the game. The last break of the match was cut short when our striker tripped, but I wasn’t in a good enough position to see if it had been worthy of a penalty and the referee hadn’t deemed it so. By Ali (2W)

On Monday our U13Bs fought hard in a tight ESFA cup match, narrowly missing out in the final minutes. Budding sports journalist Olmer O (2F) tells us all bout it here in his match report for the Hampton Sports Chronicle.

The first interform competition of the year took place on Monday, with the annual Second Year cross country run taking place during Games afternoon. There was a slight change to the procedure this year, with the run being made optional, much to the delight of many Hampton students! Roughly forty boys took part in the 3k run, with places in the cross-country team and interform points at stake. Marcus Solomon was immensely impressive, finishing a while before second place Owen Parker and third place Alex Watson, while Finley Milner and Felix Burt completed the top five. 2W had the most runners competing in the competition, while 2F had the most runners finishing in the top ten. Mr Clarke will certainly have his work cut out choosing a suitable team for next week’s cross-country event, with many fast boys recording impressive times. By Alex (2F)

Every week a group of us come to write the blog. It’s quite a fun club and we discuss topics that happened in the week. It’s nice to round up the major events of the week and write the ten questions. Everybody has their own take and they write their version of the story. It also gives us an opportunity to interview our form tutors and find out what they do. I really enjoy it and I can’t wait to continue.  By Aarush (2J)

French Fun Clubs runs every Thursday in Room 14B which is located on the second floor in the atrium. It starts at 1pm and is run by Madame Dubost and Madame Vincent. In French Fun Club, we play a variety of games whilst learning French at the same time. Some games that we have played are: Guess Who? Hangman and many more. I would recommend this club for anyone who would like to learn more. By Joshua (2B)

The Bebras challenge is a fun challenge that involves using computational thinking to solve problems, which, in turn, determine your mark. My class, 2P, did it on Thursday during our computing lesson. It was challenging, testing our ability to do mathematics and use data to determine an answer. It also had a mark scheme, that looks like this:

There are three difficulties: A, B, C.  A being the easiest, C being the hardest. Now on to a more interactive part of this report: I challenge you to solve this problem that is like a Bebras level C question! I will reveal the answer next week! 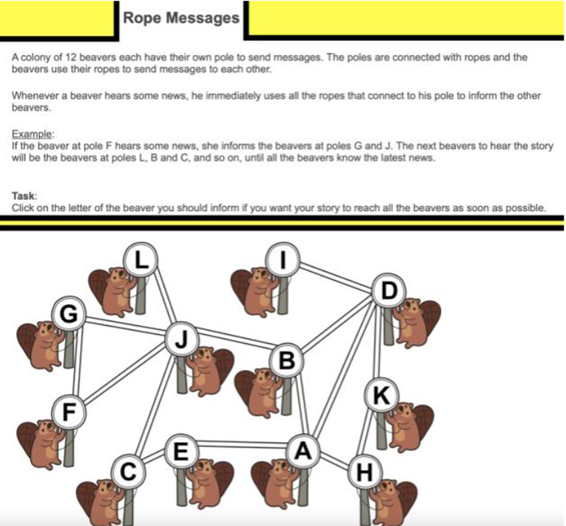 Last weekend, boys from 2B participated in a charity bike ride, walk and run. After we did the exercise, we all sent evidence and on Monday morning handed in some money. The estimate is that we contributed over £100 overall as a class. This money will go to the charities the school has decided to sponsor this year. It was really fun to participate in this challenge and we are the first class to do a charity exercise this year. By Aditya and Joshua (2B)

In this week’s form period Alexander and Elio (charity reps for 2F) brought up a fantastic charity event for this weekend and encouraged all pupils to take part. 2F students will be going on a sponsored bike ride or run this weekend. The pupils will try to get as many sponsors as possible. The money will be donated to this year’s Form Charities. We are very excited to see what other classes have come up with too. Please don’t miss the total donation 2F has made, which will be in next week’s blog. By Omer (2F)

The T20 World Cup is coming to the closing stages. As of the day this was written, England, New Zealand, Australia and Pakistan are in the semi- finals. England, the favourites, are facing New Zealand on Thursday, for a place in the finals. It will definitely be a thriller, no matter how one- sided the match looks right now. In the other semi- final, Pakistan will face Australia. Pakistan are unbeaten in all games so far this world cup, whilst Australia had to fight to qualify. No matter what happens, it will surely be a thriller. By Ameya (2J)

Congratulations to Adrian (2P), Jihwan (2P) and Prabodha (2W) for their very impressive individual performances in the Junior Maths Olympiad. All three were awarded a Distinction and a Gold Medal! Adrian (2P) scored 69/70, finishing an amazing second in the UK despite competing with pupils in the year above!! 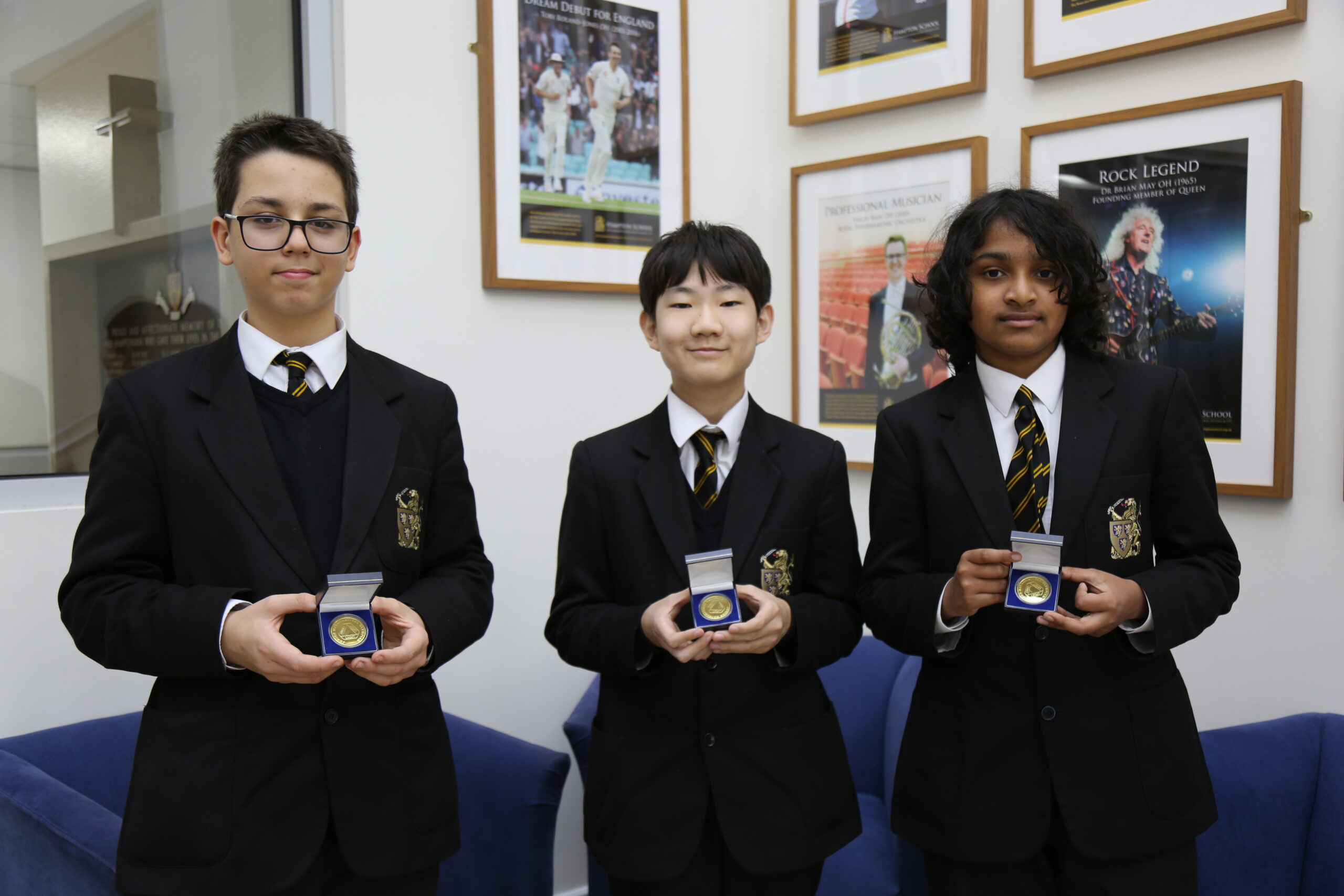 Welcome to the Weekly Questions! Every week, we’ll post 10 general knowledge questions, and, if you have a go, you can be awarded a merit if you send your answers to Miss Kugele (r.kugele@hamptonschool.org.uk)! This week’s classics themed questions have been set by Aditya and Joshua (2B)