Interform Chess, The Terrible Infants and Rock On!

Interform Chess, The Terrible Infants and Rock On!

It has been fantastic to see so many of you involved in events outside of the classroom over the last week, and I know that you have all been so excited to have the opportunity to perform in front of a live audience! We have also had the excitement of the inter-from chess competition which was enjoyed immensely by all that took part.

A big well done to Trivikram, Zaid and Aleksander in 2P for organising such a fantastic interform event, and thank you to Zaid for sending us this report!

On 23 June the Inter form Charity Chess tournament took place. The afternoon didn’t pan out exactly as planned, but I would still say that it was a huge success. There were plenty of exciting games, illegal moves, and broken clocks to annoy the players.

Each form was to select 4 players to participate. The level of chess was very high. At the beginning, it seemed that 2P would be comfortable favourites to win the tournament, but when the news went around that they would not play their strongest team, this opened doors for the other forms, namely, 2J and 2W.

With the class photos in the way of the tournament, there was plenty of bolting to and from the atrium and room 50 to fit all the games in. Unfortunately, we weren’t able to play the final round, however this did not hinder the quality of chess played and the results.

After a series of entertaining events with broken clocks, illegal moves and confusion with games, the tournament ended with it being extremely tight within the top 3. Here are the results:

This therefore means that the Final will see 2J taking on 2P. It will be held on Monday at 1.05pm in room 50.

Overall, I think that this was a fantastic event and I can’t wait for more events like this in the future! 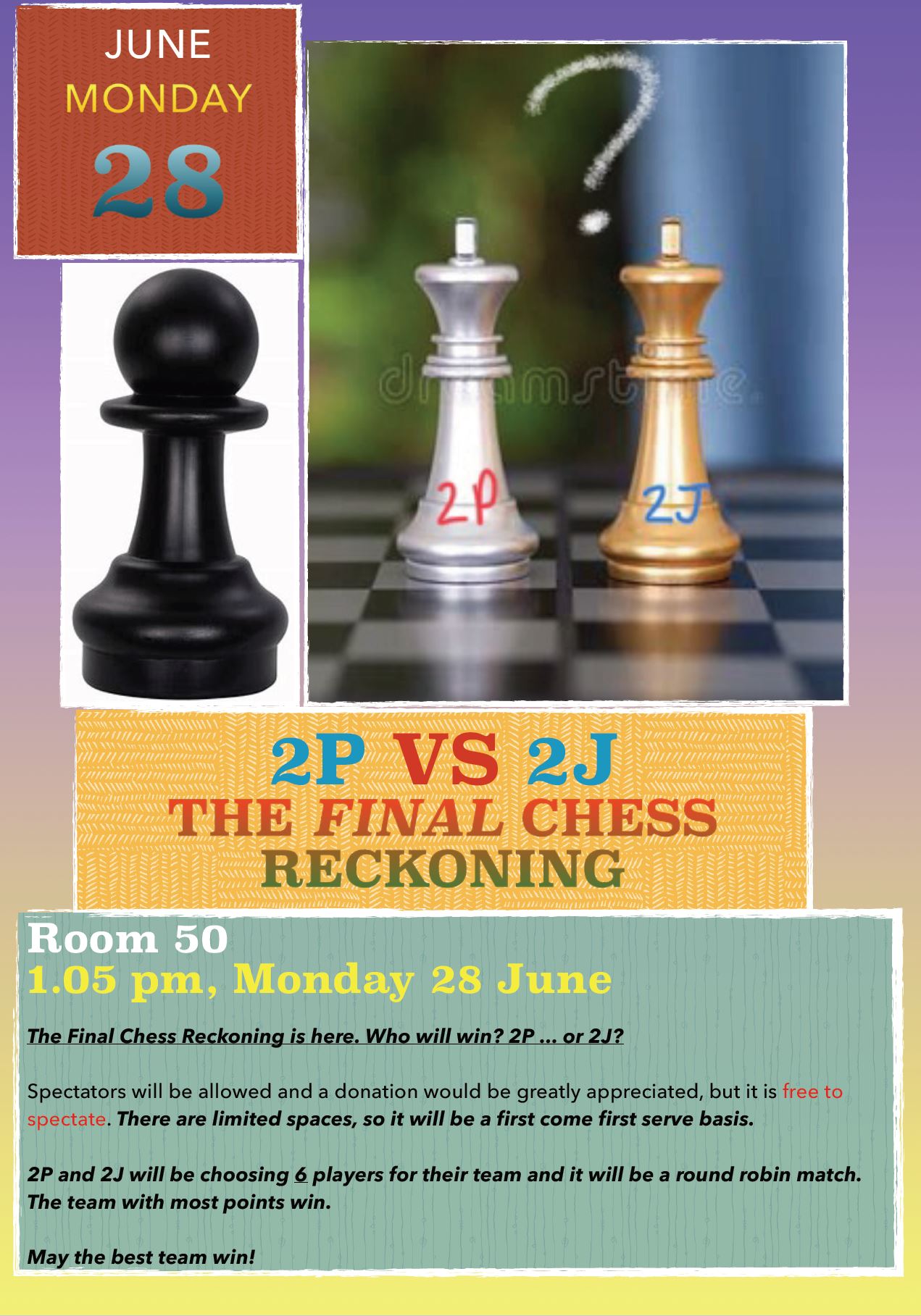 Well done to everyone that performed in the amazing Rock Concert, and thank you to the following boys for sending in their reports!

Last Friday, the Summer Rock Concert took place in the Main Hall. All year groups participated and consisted of many bands. I played the bass guitar in two Second Year bands, playing the Pretender (by Foo Fighters) and riffraff (by AC/DC). The concert was really fun, especially due to the live audience there. After lessons had ended, we went down to do a sound check and then the concert started at 7:00pm. Ewan 2J

The Hampton School Summer Rock Concert 2021 was a great success, and it was a great way to mark the easing of lockdown restrictions. The concert consisted of a mixture of bands from all ages and even a few soloists. We saw multiple performances from Second Year with three separate bands. The drummer Avi Bhatt even starred in the First Year performance as they lacked a drummer. Some of my favourite acts were the First Year performance of Sweet Child of Mine by Guns and Roses and a composition from the band Syndicate. Overall the concert was very enjoyable for the audience and the participants from our year enjoyed playing too. Felix 2J

Well done to everyone that performed in the excellent Lower School Play, and thank you to the following boys for sending in their reports!

On 15 and 16 June First, Second and Third Year performed a play about many different terrible children with their own bizarre stories. They acted out as narrators for each separate story with crazy face paint and many interesting props. Due to Covid-19, the cast were only able to come together for one week to run through the play due to group bubbles. Especially considering that the play was only being rehearsed for a couple months, the play was a great success. Alex 2J

Over the last week, the play, The Terrible Infants, has been performed in the Hammond Theatre. It took place on Tuesday and Wednesday night, consisting of short, funny stories. The cast consisted of 36 people, ranging from First to Third Year. The rehearsals had been going on from the start of the summer term and has been an enjoyable experience and a taste of drama at Hampton. Despite being slightly nervous beforehand, I really enjoyed performing the play in front of a live audience last week. Ewan 2J

There is a lot of excitement building as we look ahead to the first Hampton School Giving Day on our Founders’ Day, Tuesday 29 June.

There will be 1557 minutes of fundraising for the Fitzwygram Foundation and Free Places at Hampton.

Thanks to the Hampton School Parents’ Association (HSPA) there will be two exciting challenges for the boys on Tuesday, the HSPA Food Bank Challenge and the HSPA Penalty Shoot-out. We’re challenging our pupils to bring in 1557 food bank donations and to score 1557 penalties in one hour during the lunch break. So don’t forget your food bank donation and get ready to score some goals! There’s also a rumour that there may be Ice Cream at lunchtime!

To find out more about Giving Day and to donate please visit https://givingday.hamptonschool.org.uk/

Have a go at our weekly trivia questions and send in your answers for a merit! This week’s questions have been set by Trivikram (2P)