It has been a jam-packed penultimate week of term for the First Year boys, with Geography trips and Music workshops for all the boys, exciting fixtures for the U12 cricketers and athletes, and a victorious tennis fixture against St Benedict’s Ealing. With only five days of this term left, we would encourage the boys to enjoy all the opportunities available to them, and to continue to be kind to each other as tiredness sets in. Nearly there, boys!

It’s the final week of the School year, so if there’s been a club that you’ve always wanted to try then now’s the time to try it!

On Monday, 1P, 1H and 1F braved the elements and set off for their Geography trip to the South Downs. Lucas S-T (1P) reports on a very soggy day!

We first went on the bus to the South Downs that took quite some time and a lot of Hamptonians were singing. We finally reached our destination and we started walking up a hill. It was very muddy and quite a lot of people were slipping over. The South Downs was a beautiful and green land full of hills. Unfortunately, it was raining tons so we couldn’t do any of the activities we were going to do, so we were just walking the entire time and had to call it off earlier then intended. We at least got to see some nice views, cows and a lot of cow waste! Just before we left, we went to Devil’s Dyke which was very cool. In the end it definitely wasn’t the best trip with all the rain and the very strong wind but the cows were cool.

After their semi-final victory over John Lyon School last week, the U12A Cricket team played in the finals of the Middlesex County Cup this week against Merchant Taylors’ School. Aadi K (1L) reports on an exciting match:

The U12A Cricket Team were excited to go for the final against The Merchant Taylors’ School for the Middlesex County tournament.

The dark clouds built up the atmosphere of the final.

It was time for the toss and we were put to bowl first. The quick opening wickets meant we were on top from the start. A splendid catch from Akshat N meant that their best batter was out early, which was a huge advantage. Tight bowling from our unit meant they were kept down to 116 in their 25 overs.

With a decent total to chase against a very good cricketing side, we knew we had to be careful. We started off well but then in a flash a couple of wickets fell. Our middle order had collapsed. However, Aditya K and Marcus S together batted beautifully to get us near the target. Then arrived the last over. A couple of singles were taken but then four runs remained to be scored. A fantastic pull shot from Aditya K meant we had won. We ran on to the pitch with happiness.

We were all very cheerful with this win, we had won the finals of the Middlesex County Cup. Every single person in the team contributed and together we restored the Hampton Pride. 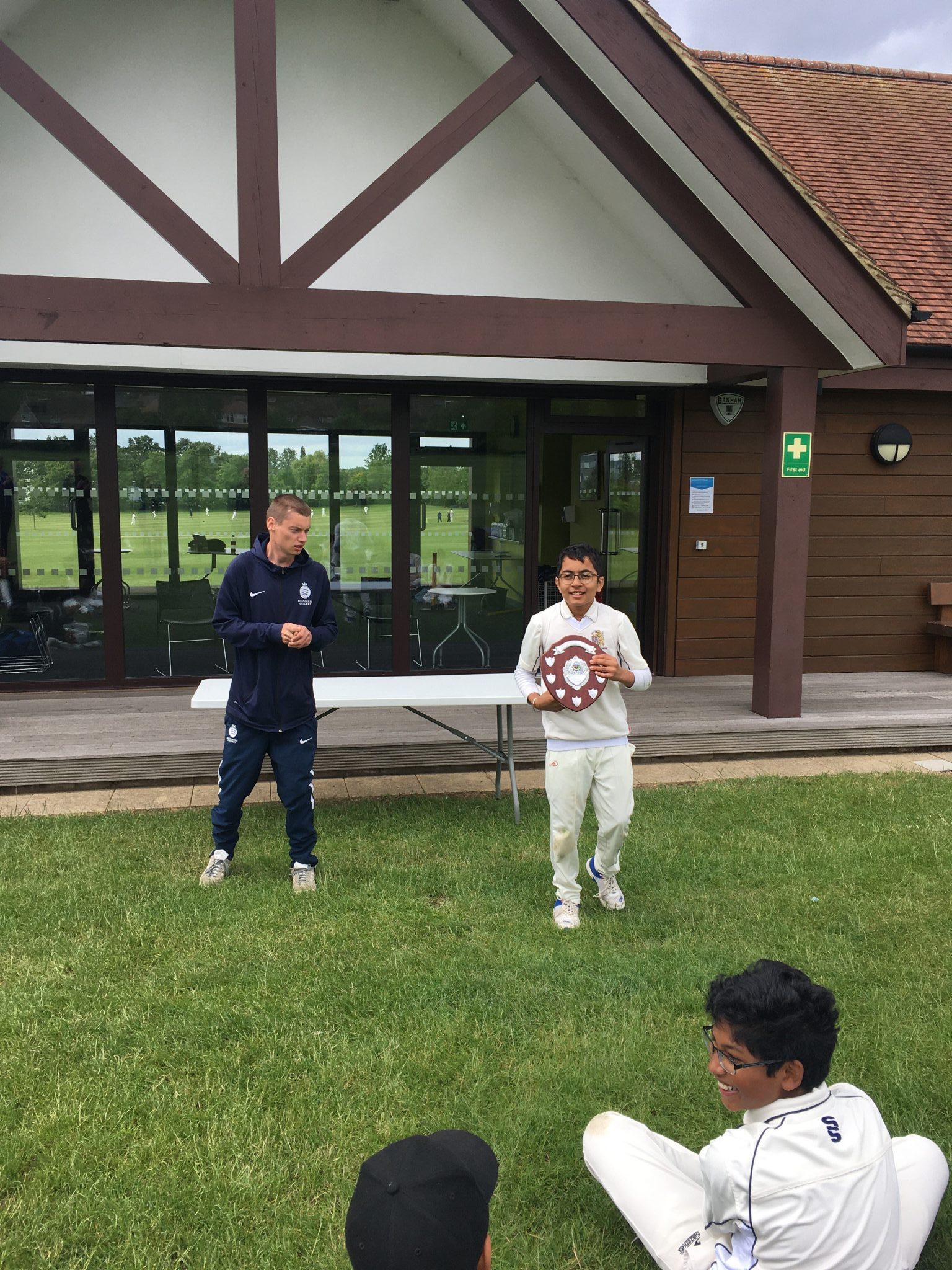 The Axolotl with Kanishk M

This week, Kanishk M (1W) tells us a little more about another fascinating amphibian, the axolotl.

In 1864, French zoologist August Duméril was baffled while investigating the Axolotl. Unlike most amphibians that turn into terrestrial adults, Axolotls retain their juvenile characteristics and never leave the water. In an attempt to induce metamorphosis, Duméril spent months removing their gills. But most of the time, the axolotls simply grew them back. Axolotls are the masters of regeneration, they can flawlessly regenerate their body parts ranging from limbs and crushed spines to parts of their eyes and brains. This extraordinary salamander is native to the wetlands of Mexico City. The ancient Aztec people considered it to be the reincarnation of a god named Xolotl, hence the Axolotl’s name, roughly translating to “water monster.” Axolotls reach sexual maturity with gills and a tadpole-like dorsal fin.

Biologists think their forever-young condition, called neoteny, evolved because of their stable habitat. For salamanders that develop in waters that dry up, efficiently transitioning to land is essential. But the lakes Axolotls evolved in were unchanged year round and didn’t host many aquatic predators. So scientists think that it was advantageous for the Axolotls to forgo the demands of metamorphosis. However, they have not completely lost this ability. If exposed to certain substances, Axolotls will turn into adults. But they often have shorter lifespans and lose some of their regenerative abilities.

These talents may seem like superpowers to begin with, but Axolotls have good use for them. As babies, they are in direct competition. So they snack on each other. This is usually a problem due to how quick they can regenerate their body parts. To better understand the Axolotls baffling biology, scientists sequenced its genome. And found it to be ten times longer than a human’s! Mutations can change the length of any animal’s genome. For some reason, salamanders have more DNA than any other vertebrates because they lose parts less often.

Investigating the Axolotl’s genome, scientists saw many repeated sequences, most of which do not code for proteins and have no known function. They also found genes key in their regeneration. However, the biggest factor that sets Axolotl regeneration apart may not be a unique set of genes, but how they regulate their genes. However, their native population is at threat. The drying of lakes means that the roughly 1000 wild Axolotls left on the planet are situated on two lakes, Lake Xochimilco and Lake Chalco, both in Mexico, where they suffer from pollution and invasive fish.

So despite their popularity and amazing regeneration skills, they still need saving.

There is a lot of excitement building as we look ahead to the first Hampton School Giving Day on our Founders’ Day, Tuesday 29 June.

There will be 1557 minutes of fundraising for the Fitzwygram Foundation and Free Places at Hampton.

Thanks to the Hampton School Parents’ Association (HSPA) there will be two exciting challenges for the boys on Tuesday, the HSPA Food Bank Challenge and the HSPA Penalty Shoot-out. We’re challenging our pupils to bring in 1557 food bank donations and to score 1557 penalties in one hour during the lunch break. So don’t forget your food bank donation and get ready to score some goals! There’s also a rumour that there may be Ice Cream at lunchtime!

To find out more about Giving Day and to donate please visit https://givingday.hamptonschool.org.uk/

A few questions for you to have a go at yourself or challenge people at home if they know the answer. Merits are awarded for everyone who has a go! Just click on the link below and enter your answers and points or the Inter-Form Competition will be awarded to the form with the most entries every week.

We had 32 entries for the five questions last week, 1B are in the lead this week with 18 submissions! Wow, well done boys! Can we beat this next week? Well done to the following boys (make sure to add your merits in the back of your homework diaries and to collect your merit certificates when you reach 10!):