With only four days in School this week after last weekend’s Bank Holiday, the Third Year boys have been busier than ever trying to cram in their usual array of activities into fewer days! There’s been much excitement about the return of School sports fixtures in recent weeks, and this has dominated discussions in Form groups, along with the prospect of watching no fewer than three English football clubs in European Cup finals over the coming weeks! How exciting!

We have to start with congratulations to the U14A cricket team. They won their National Cup First Round knockout fixture by 20 runs in a finely balanced contest away at Brighton College on Thursday afternoon. The team have earned the right to compete for the national title having won the Middlesex Cup as the U12A team in 2019 (no competitions were possible last summer). We wish the team well in the next round against opposition from either Norwich or Ipswich.

There are still a few HPV vaccination consent letters to be returned. Please can we ask that parents complete the consent form and ask your son to return it to his Form Tutor on Monday.

Boys should continue with the programme of self-administered LFD testing at regular intervals (twice a week) at home. Please follow the guidelines sent via SchoolPost from Mr Woods on Thursday 11 March, titled “Lateral Flow Device – arrangements for home testing”.

Third Year Progress Assessments will take place during the week commencing Monday 24 May (the week before half term). Boys should have created their own revision schedule and now be using the homework time available to prepare diligently for the Progress Assessments – continuing this weekend.

Boys – enjoy your sports fixtures this weekend. Make the most of the two weeks between now and the start of your Progress Assessments. Stick to your revision schedules. Try to work effectively and in ways that suit your learning style. Maintain a healthy diet, keep to regular sleep patterns, stay hydrated, and allow time for rest and exercise. Keep things in perspective. We will only ever ask you to strive for your personal best. As always, let us, your Form Tutors or the relevant subject teachers know if you are having any difficulties.

Struggling to know where to start with revision? Can’t seem to find a way in? Well, with thanks to our fantastic Learning Support department, the link below contains some absolutely brilliant tips and advice on how best to revise! Take a look and give one of the revision strategies a go!

top tips on How to  revise

Take a look at this amazing oil pastille drawing of a tiger from talented artist Ishan P! A roaring success, don’t you think? (Ed – We agreed you wouldn’t do this…) 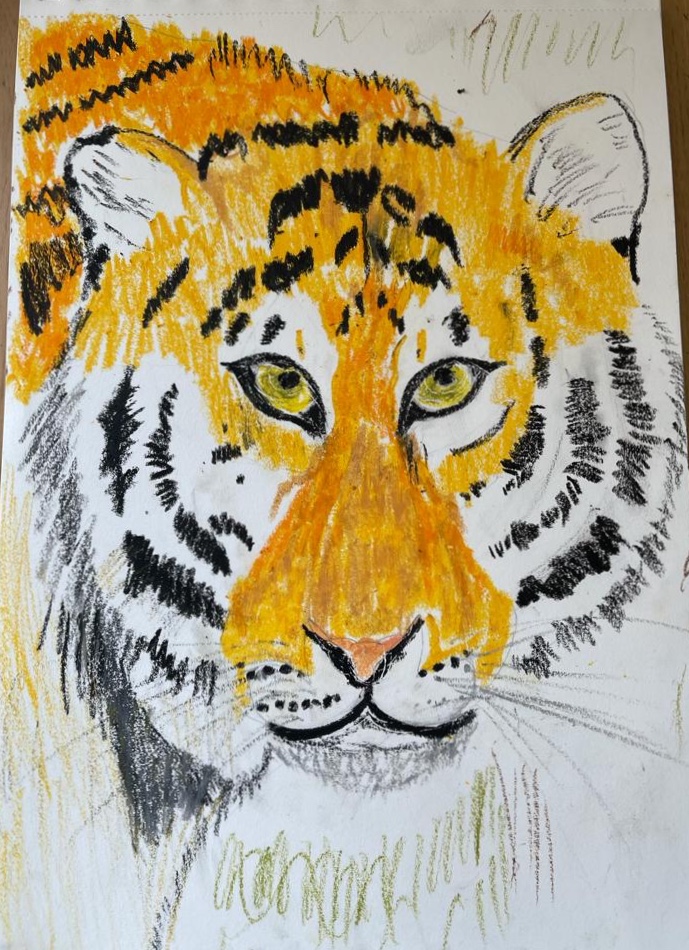 It’s not just Ishan who’s been coming up with some awesome art ideas this week, lots of our Third Year artists have been getting creative in the Hampton studios. From soap sculptures to clay carving, take a look at what you’ve getting up to during your Art lessons:

Form Charity are running a Eurovision charity fundraiser again this year! Pupils who wish to participate should click on to the Firefly page linked below where they can sign up, and will then be assigned a country.  All pupils assigned the winning country will get a prize!!  Participation costs £1 which they should pay to either Form Tutors, their Languages teacher, or Ms Iredale next to room 12 on the Languages corridor.

The Firefly page also has all the songs, which may or may not be to your taste, but it’s all in the name of putting the fun back in fundraising! The Russian one is my personal fave! There is a button on the page where you can cast a vote for yours.

A recording session for Third Years involved in School Choir will take place between 2pm and 3.20pm on Tuesday 15 June. All recordings will take place in the Music Hall and SMART SCHOOL UNIFORM must be worn. Social distancing and bubbles will be carefully adhered to.

It’s been a busy week for our U14 cricketers who have been involved in plenty of fixtures, many of them resulting in excellent wins! The U14A team defeated Tiffin at the start of the week, with Thomas T taking 2 good wickets, and they followed this up with a cup victory over Brighton College on Thursday where William W and Anuj S both scored excellently, with Anuj also taking 3 wickets. Fantastic results, chaps!

Not to be outdone, the U14C team also claimed a strong victory over St Benedict’s, and rumour has it that a huge grudge match is in the offing between Thomas T and Natty T’s club sides this weekend… Play well, boys!

It was heart-warming to see our U14 Rugby sides out on the pitches and involved in competitive fixtures again this week, after such a long lay-off due to Covid. The U14A side came up against a very strong Whitgift side and undoubtedly gained a huge amount of experience, whilst the U14Bs claimed a hard fought 15-12 win with Tom M, Ben W and Alfie A scoring tries.

The U14 Tennis team had another close fixture, this time against Harrodian, and the U14 rowers are building up to their fixture against Radley in two weeks’ time! 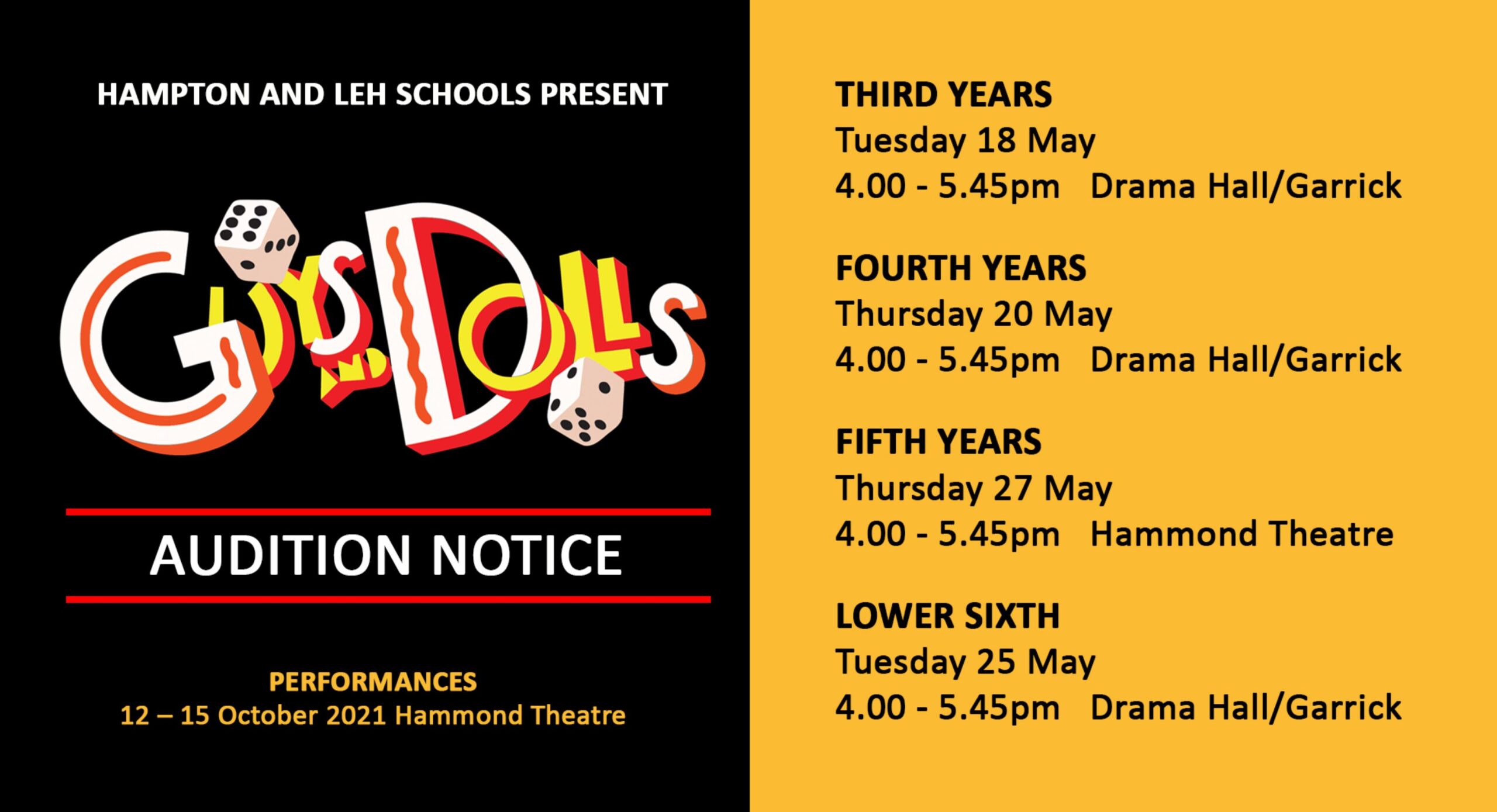 The Drama department is delighted to announce that the next School Musical with LEH will be Guys and Dolls! This will be hosted by Hampton in October 2021 and we are looking to cast the production and get started with rehearsals before the summer holidays.

Third Year auditions will take place on Tuesday 18 May 4-5.45pm in Drama Hall. If you are interested in auditioning, please download the audition pack from the Drama page on Firefly.

Question of the week!

Well done to Tristan T, Ben T, Adam A, Omer D, Avinash G, Monty N, Teo M and Ishan P who all correctly answered that 4 chemical elements were named after the town of Ytterby in which they were discovered – yttrium, terbium, erbium and ytterbium! All of these elements were discovered in the same mine in Ytterby, along with other elements like scandium, holmium, thulium and gadolinium! Wow!