With slightly more mixed weather this week, the First Year boys have been knuckling down in the penultimate week of half term. A fascinating Assembly by Mrs Halford on LGBTQ+ History month at the start of the week gave the boys lots to think about, and hopefully inspired them to explore a different aspect of history. In Monday’s Assembly, Mr Knibbs also outlined some changes to MS Teams lessons, and we hope that the boys have enjoyed the increased interaction from having their cameras on in lessons; it has been lovely to see a sea of faces instead of a sea of initials!

A reminder of all the things going on outside of lessons – there’s lots to get involved with, so do go and have a look at them on Firefly or the Hampton@Home newsletter!

There are also two lunchtime clubs on offer to First Year boys:

This week I interviewed a mentor called Josh.

We make a living by what we get,

We make a life by what we give.

What type of work environment do you prefer and why?

I prefer an environment completely free from distractions. It helps me to work better.

If you had to change your name, what would it be and why?

Probably Jonah as it’s a very exotic name. Many people are called Josh and I’d like something more exotic hence Jonah.

What are your key strengths?

What subjects are you doing for your A Levels?

History, Politics and English and I would recommend all of them.

Personally, what’s been the most challenging thing in home learning so far?

I would say trying to stay focused in lessons because I’m that type of guy that will have a chat here and there. It’s hard to keep going.

What makes a good day at school?

I love every day at school, but a particularly good one would be to see my mentor form in the morning, then lessons, a club at lunch… For me, a normal day at Hampton is very enjoyable.

What school sport do you enjoy watching?

I’ve watched a lot of sports over the years but the best one to watch is probably rugby.

If you could pass on any wisdom to Hamptonians, what would you pass on?

I know everyone would say this but I would pass on to get involved in everything you can because you never know what you might like. I would also say definitely concentrate a lot in lessons as I didn’t and then it was a lot of catching up in Third and Fourth years.

Well done to all who submitted entries for our First Year hat challenge this week; the standard of entries was excellent, and it was really difficult to pick the winners!

This week is a physical challenge, which involves getting out and about! 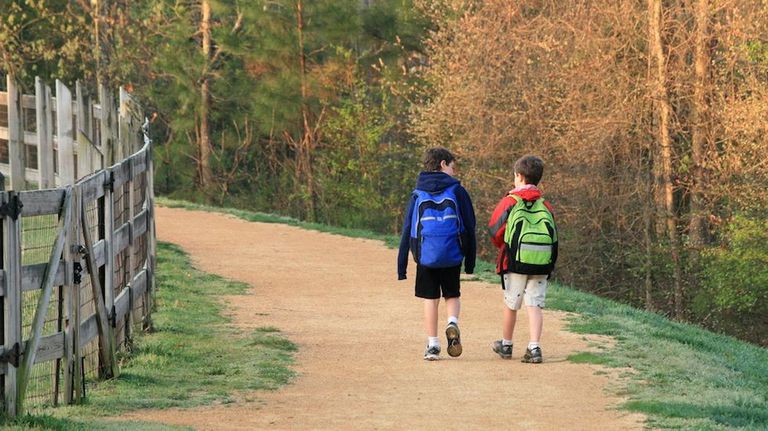 The challenge is to go for the longest distance in one go. You can walk, run or cycle; if you have a smartwatch or an exercise app, then please submit a screenshot of your outing, or submit your distance/time if you don’t, with a photo of yourself. Please be mindful of safety (helmet and lights if you’re cycling, with an adult if you’re going a bit further than normal or if it’s going to get dark). As ever, there will be prizes for the longest individual entries, and a prize for the form with the most entries. Remember that these challenges add to your form’s total for this term’s Inter-Form Olympics, so wrap up warm and get out and about!

Kanishk M (1W) continues his exploration of the history of ancient empires by looking at the Byzantine empire.

Most history books will tell you that the Roman Empire fell in the fifth century CE, but this would have come as a big surprise to the millions of people who lived in the Roman Empire up through to the Middle Ages. This medieval Roman empire is now more modernly called the Byzantine Empire.

It began in 330CE, when emperor Constantine, the first Christian emperor, founded his capital in the Greek city of Byzantium, later known as Constantinople. When the Visigoths sacked Rome in 410, and the Western provinces fell to the barbarians, the eastern capital remained the seat of Roman emperors for the next eleven centuries, Under the rule of Justinian, the Byzantines incorporated Roman law in a book known as the digest. It shared the continuity of the Roman empire. This gave them a technological and artistic advantage over their neighbours, who they called barbarians. Under the rule of Justinian the First, the Hagia Sophia, once a church and eventually turned into a mosque, was built.  It had a dome so high that one like it wouldn’t be built for another 500 years. In the ninth century, visitors from beyond the borders came to marvel at the architecture, golden birds sang on golden trees, and an organ was played out of the mouths of two golden lions in the royal palace. Even the throne had hydraulic engines to raise it high into the sky.

In 1203, an army of excommunicated French and Venetian Crusaders made a deal with a man named Alexios Angelos. Alexios was the son of a deposed emperor and promised the crusaders vast riches for support to help him retake the throne from his uncle. He succeeded, but soon after he was deposed and killed. So, Alexios’s unpaid army turned their aggression on Constantinople. They lit massive fires which destroyed countless works of ancient and medieval art and literature. Leaving a third of the population homeless. The city was recovered 50 years later by Michael Palaiologos, but the empire never regained all their territory from the crusaders.

Finally, in 1453, Ottoman Emperor Mehmed the Conqueror captured Constantinople after forging the largest cannons in the world, moving his whole fleet of ships across the land to attack the city from an unexpected position and having Serbian miners dig tunnels under the city walls. After conquering it, he named it as his capital: Istanbul or “to the city”. Bringing a conclusive end to the Roman Empire.

The empire’s name came in the Renaissance, where the people wanted to connect with antiquity, and so they wanted to draw a firm line between the Latin-speaking pagan empire to the Greek-speaking Christian empire. Thus, after 100 years since its fall, the Byzantine empire was born.

Once you learn to read, you will be forever free.

You may have spotted some of our First Year team helping to celebrate National Storytelling week. If you have any spare time this weekend, why don’t you pick up a page turner?

It was also fantastic to catch up with some of our First Year bookworms as they discussed the brilliant Holes by Louis Sachar. Take a look below to get a flavour of what they discussed this week:

Join us for a special Thursday Night In at 7pm on Thursday 11 February to cook-along with Hampton School Head Chef Paulie. We will be making some delicious ‘Posh Nachos’. We will be preparing the toppings as the tortillas bake and become nachos! Following that we will top them with jalapeños and cheese. This dish will be served two ways: one plate with everything together, one with the dips served in bowls on the side so everything is crispy with baby gem “boats”. 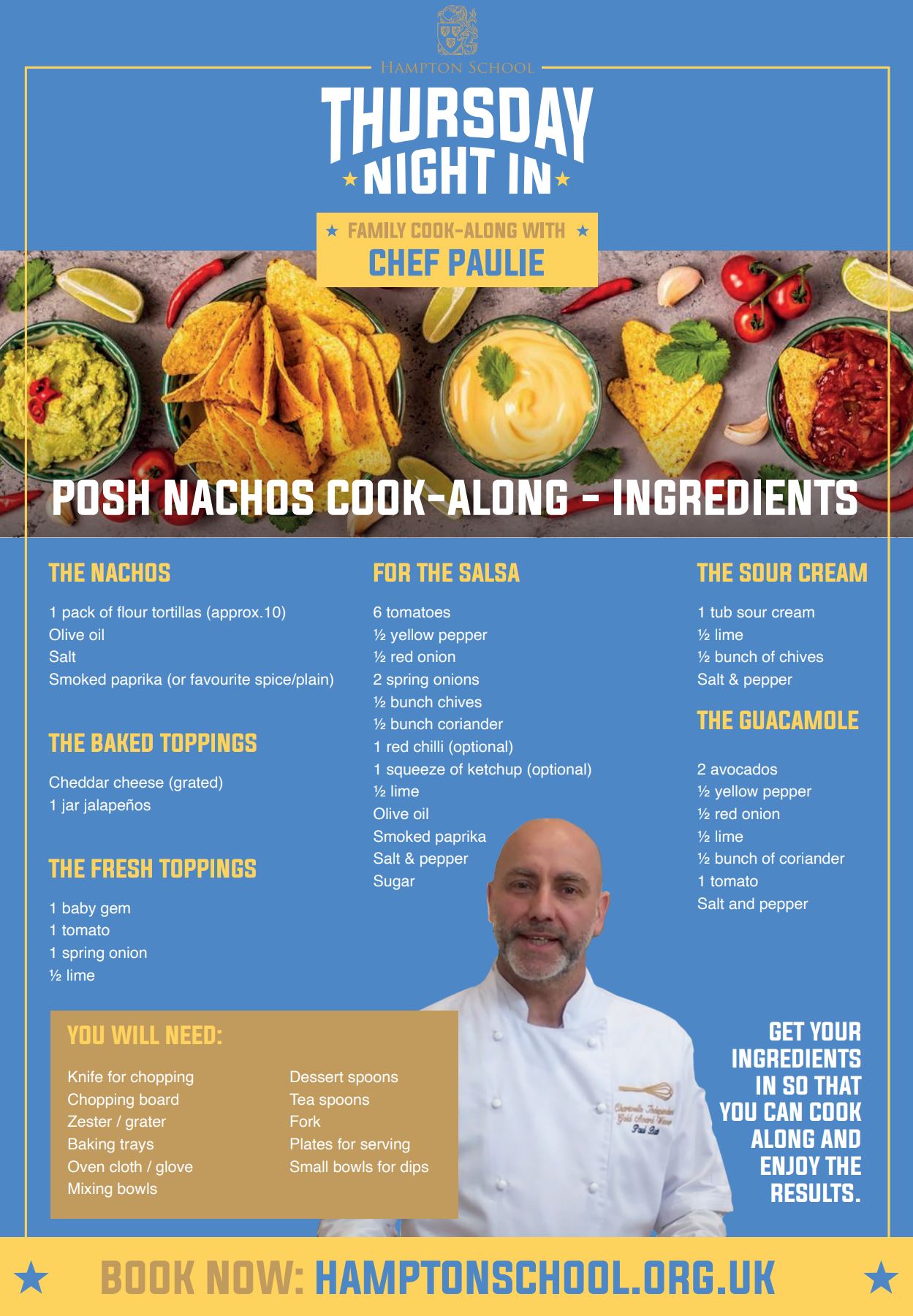 For his birthday, Maurice R (1H) held a marathon fundraising gaming day, to raise money for Shooting Stars Children’s Hospice. He spent an eye-watering 12 hours online, joined by other members of 1H, and raised over £1,000; fantastic effort, Maurice!

We had an impressive 50 entries for the 5 questions last week, 1J are in the lead this week with a record-breaking twelve submissions! Well done to the following boys (make sure to add your merits in the back of your homework diaries and to collect your merit certificates when you reach 10!):