Yes, yes, I know that there’s still two weeks to go, but… Merry Christmas everyone! The Third Year boys have been full of the festive cheer all week as they counted down the days until the end of term, and it’s finally here!

A fascinating and challenging quiz kicked the week off in style on Monday, with the boys pitting their wits against each other in a series of tricky rounds, all in aid of Form Charity. Much fun was had, and thanks go to Mr Keenan for putting it all together. Christmas lunch is always a favourite of both the boys and staff, and this year proved to be no different with everyone enjoying the usual tremendous feast of turkey with all the trimmings on Thursday. Most people like to enjoy a quick nap after Christmas lunch, but that wasn’t on the cards for the Third Year boys as they rushed out on to the 3G to take part in a year group penalty shoot-out competition, with 3A coming out victorious (more details below!)

All that was left at the end of the week was for the boys to wish their teachers a very Happy Christmas and off they all went for some well-deserved rest and recuperation. What a term!

Have a great Christmas everyone – see you in 2021!

Well done to all Third Year boys (and parents) for reaching the end of an extraordinary term.

Reports will be published to parents today. We encourage you to review your son’s report with him and consider the feedback from subject teachers carefully, noting any particular targets. We will ask the boys to summarise their targets for the term ahead early in the New Year. January will also be the time to follow up on any concerns you may have as parents, following your son’s report. Please feel free to contact subject teachers directly by email if you have subject specific concerns (copying Form Tutors). Or, if you have more general concerns about academic progress, please email your son’s Form Tutors (copying both Heads of Year) in the first instance. Any such emails will be addressed at the start of next term.

Generally speaking, well done to the boys for an impressive set of reports. They have maintained a diligent approach to academic study alongside a necessarily considered approach to safeguarding themselves and other members of the School community. Despite the extraordinary circumstances this term, Third Year boys have maintained good humour, ambition and a calm focus on their endeavours in School. Well done to all of you! 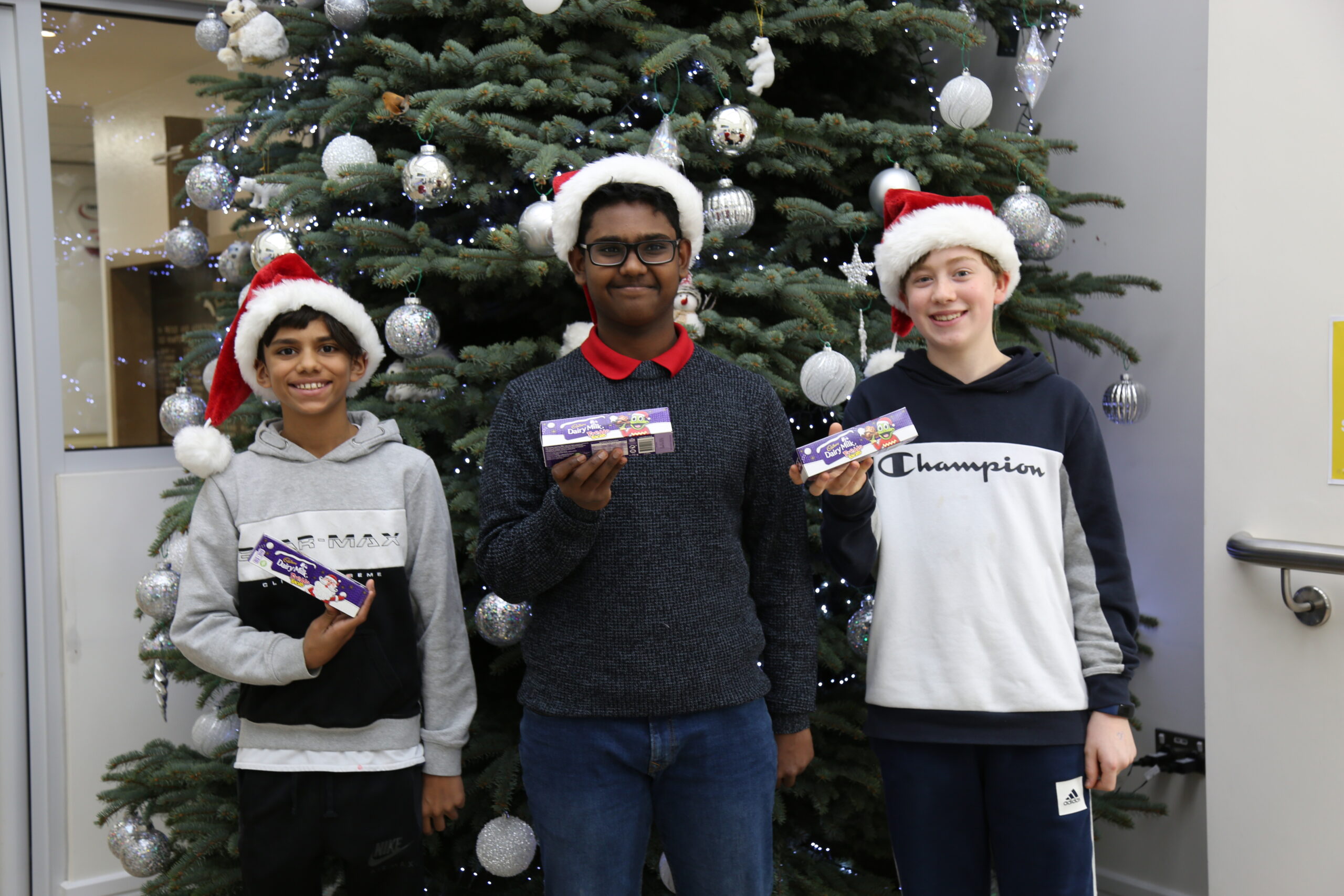 With best wishes for a Merry Christmas and a Happy New Year,

Sam R (3B) got himself fully in the spirit of the Hampton 12 days of Christmas challenge last weekend, helping to deliver a carload of gift bags for the homeless. Scarves, gloves, toiletries, sweets and treats were just some of the items being donated, all gifted by Sam’s friends and neighbours in Putney and bound for distribution on the street by the charity, Crisis. In total, 600 gift bags were delivered by Sam and his community and it all came from a simple request on a local social media page! Wow!

Well done to Abhay (3A) who has designed this year’s Christmas Card. Let’s hear how Abhay came up with the idea;

When I was told about making a Christmas Card related to Hampton I immediately thought about involving the Lion as that is a big symbol of Hampton, but then I went to the internet and searched up Hampton snowing, and a wonderful picture of the front of Hampton School when snowing, so over the weekend I brought out my paints, and started painting, it took me a few tries but eventually I got the snow right. When finished I added the words “Merry Christmas” and it was finished. It was a fun project and I enjoy painting at home.

The Third Year Inter-Form Penalty Shoot-Out was a hotly contested affair on Thursday lunchtime, and it was 3A who came away with the spoils after converting six out of their seven penalties! 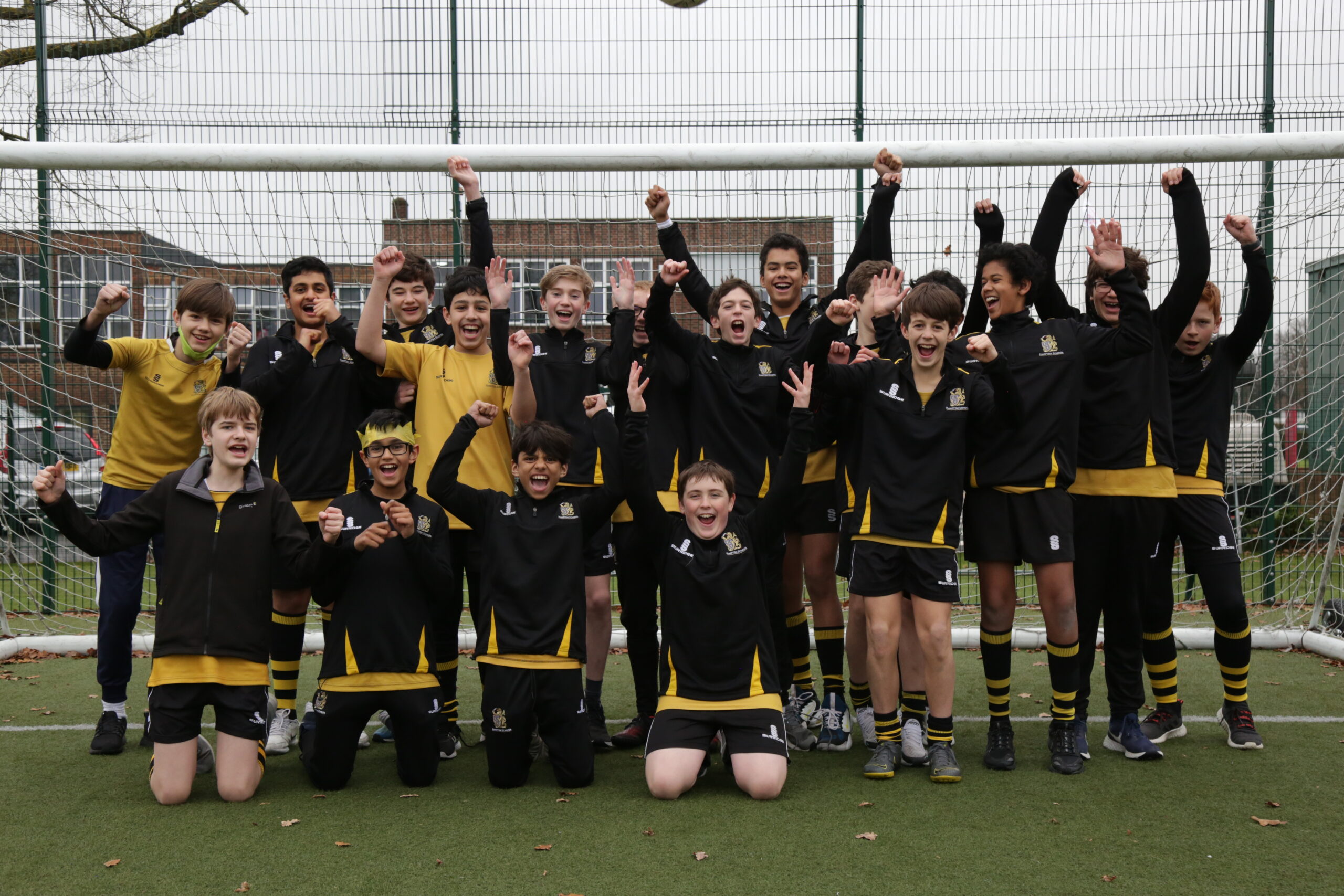 Sam G, a member of the victorious 3A team, had this to say:

Our tactics were simply just to kick the ball and score goals. We didn’t execute everything 100%, but it was good enough. We were definitely inspired by England’s penalty success at the 2018 World Cup!

Have a look at the boys in action below.

After the autumn term, here’s how the Third Year Inter-Form table stacks up heading into Christmas. All to play for in the spring and summer terms!

The Third Year Rowers had their first competition of the season, the all-important Christmas Pudding Races where points were awarded not just for rowing prowess, but also fancy dress, carol singing whilst rowing, longest wall sit and front plank competitions.

It proved to be a close competition with the winning crew just half a point ahead of their nearest rivals. Edible prizes went out to the winners as well as the best individual performers, who managed to hold the plank or wall sit for an impressive seven and a half minutes!

Feeling Christmassy yet? This should get you in the mood! Watch the Hampton boys perform some festive classics in our Festival of Carols.

Thanks to our outstanding Music Department for putting this fantastic performance together!

What better way to sit back and take stock of the past academic year than by watching the Hampton Highlights 2019-20 video below. A quite historic year in Hampton’s long and distinguished history, I am sure you will agree!

Very well done indeed to everyone that worked out that ‘my true love’ gave me 364 gifts in total in the Christmas song, 12 Days of Christmas! You did, in fact, have to go through the whole song and count up every single gift, every time it was mentioned! Or did you…?

Have a wonderful Christmas!