Well done Third Year for getting through Exam week- we are looking forward to seeing all your sparkling exam results! Business returns to normal at Hampton with many lessons focussing on the exam review- we hope this has gone well! On Monday morning, Third Years enjoyed watching the film Selma in the Hammond Theatre as part of their RS course. This film is based on the life of Martin Luther King. We had a range of activities to complete during Thursday’s PSHE session. The boys completed a Homework survey on their iPads before listening to their tutors deliver a presentation on “Food banks and Holiday Hunger” by Stanwell Food Bank and Tussell Trust charity. Please do donate any food that you can- boxes will be available in Form rooms next week.

The 11+ boys then completed exam reviews and the 13+ boys wrote Postcards to their former Prep School Headmaster/mistress.

This Special mention involves Henry F and Sam S. They were out on a bike ride in Richmond Park last Friday evening along with Toby D.

Their friend from outside of Hampton came off his bike and had a seizure. The boys obtained help from passers-by to call an ambulance; managed with the help of Sam’s mother, who happened to be out running in the park, to contact the friend’s mother, they met her at the edge of the park and Henry gave her his bike. Henry and Sam ran and cycled alongside to take her to her son. The boys met the ambulance at Ham Gate and escorted it to where their friend fell. Fortunately, the friend is OK but he had a CT scan and the incident was clearly very scary for all.

We are all very proud of the boys’ calm and mature reaction and quick thinking to help their friend. Well done Henry, Sam and Toby!

Congratulations to Gregor W who did an outstanding job representing Hampton at Feltonfleet’s transition day. He spoke maturely and confidently and served as a great role model to the three Feltonfleet boys joining us in September.

Good luck to the Third Year boys (listed below) who will be taking part in the Arts Award Leadership Day on Wednesday 19 June:

We congratulate the Third Year boys who are working hard on their Arts Award projects in the last few weeks before the examiner comes in to Hampton. They have been completing creative work in a number of art forms, including photography, music and filmmaking, with some impressive results, and we encourage you to look at what they have been working on. If you would like to leave feedback on some of the work, you can do so by clicking on a particular person’s name and then ‘add comment’ on the bottom left on Firefly here – your peers would be very grateful for your comments.

Congratulations to Dominik H, Theo MC and Ollie D for representing the school in the U15 competition at Eton last Tuesday. You have all thoroughly earned your places in the squad and gained some great experience for next year!

The U14As went from strength to strength in the last 2 games of half term, beating Reeds by 85 runs. Matthew M (94) and Leanesh S (61) shared a commanding second wicket partnership of 167 as Hampton scored 216/2 in 29 overs. Zack G, William K, Oli L and Tetsuro K then took 2 wickets apiece to bowl Reeds out for 131. The win was the U14As fifth in a row.

The following week against Whitgift. In a tough game, Whitgift scored 167 ao, with Zak G taking 4-12, his best Hampton bowling performance to date. Hampton came close in the chase, falling just 10 runs short, with Tetsuro K scoring 42 in just 28 balls, and Zak scoring 65 not out.

Overall a great half term for the boys, winning 5 of their 7 games. They have been bowled out just once in those seven games, whilst they themselves have bowled out 5 teams, and scored over 900 runs.

The U14A’s had a good game against Trinity. Hampton were put into the field, and after a sloppy start in which Trinity were 45-1 after 5 overs, managed to reign in the visitors with some excellent tight bowling from Chand D and Ollie L (2 wickets each). Ali J and Zak G then mopped the tail with 3 wickets and 2 wickets respectively

Having been set 171 to win from 30 overs, a good start from Matthew M and Kyan S set up a good platform for a win. However a middle order collapse left Hampton reeling at 90-6 after 20 overs. Harley M and Kyan S put up a good fight, but Hampton were eventually bowled out for 144, 26 runs short. 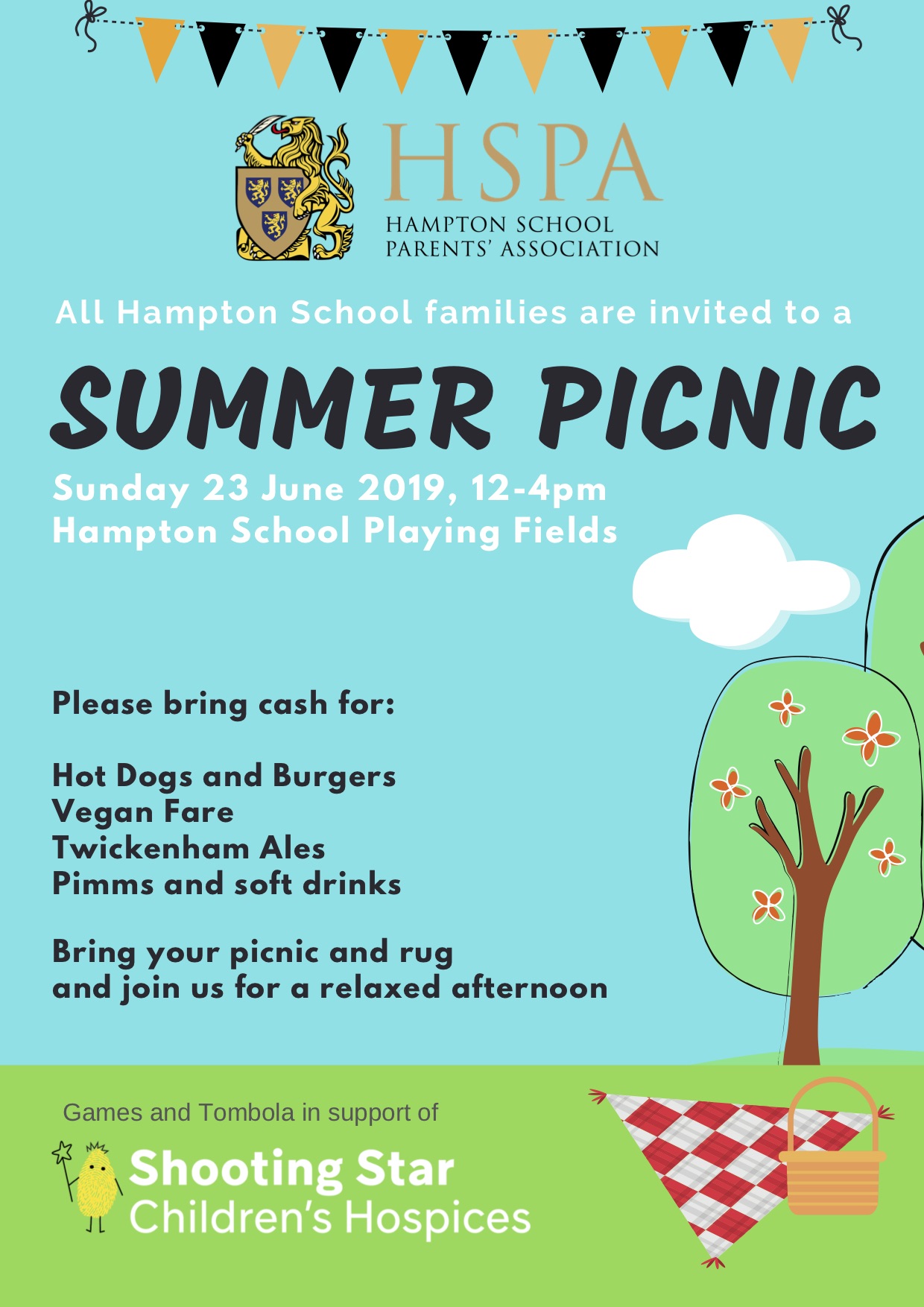 The most positive aspect was an excellent 60 runs from Kyan S – his first half century of the season – well batted Kyan!

Next up for the A’s is the Middlesex County Cup Quarter final against Heathlands on Friday, followed by a tough fixture away at St Paul’s on Saturday.

Please do remember that the HSPA Summer Picnic is on Sunday 23 June – if you are thinking of attending, then please click here to register your interest. It promises to be a relaxing and enjoyable day out, in a wonderful setting – you really can’t beat our playing fields in the summer.

Well done to all Forms for their team efforts in the Inter-Form Athletics! This has resulted in some movement in the Wills’ Cup Table including from 3D overtaking 3C and 3A now in 4th position – congrats to 3G for retaining their lead!