This week the Second Years had a special assembly explaining the HELP projects. We hope that many of you will complete a project so please do approach your potential supervisor with your idea. There is more information here:

You may also be doing something for the Science Fair, in which case I look forward to hearing from you so we can feature your project in the blog!

Well done to all the following boys who have reached their next merit milestone:

Well done to all, and remember: a great way of earning a merit is to contribute something to this blog!

Our new feature begins here! We’ll be profiling a different Form Tutor each week, based on the questions you ask them. To get the ball rolling, a big thanks to Mrs Samuel for volunteering to go first, and of course to her interviewers, James A (2H) and Monty F (2H):

James: So, today we will be interviewing Mrs Samuel, our wonderful form tutor. We have collected suggestions for questions from the class and have compiled them into a list which we will now ask you, if 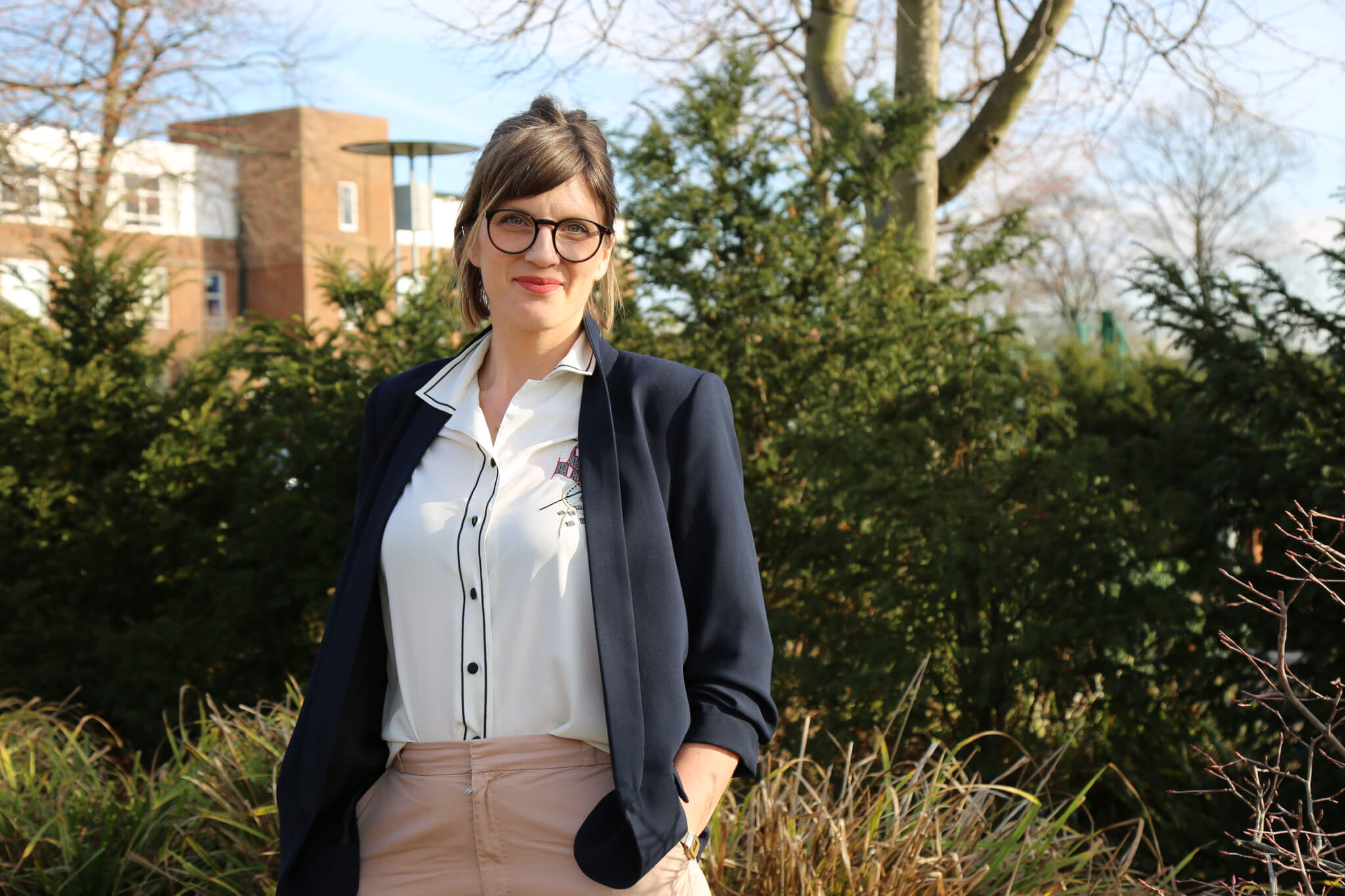 that’s all right with you Miss?

Monty: So, to start off with, what is your outlook on life?

Mrs Samuel: Hmm, glass half-full, but teetering very close to the edge of the table, to be knocked off at any moment.

James: Right. And, what made you go into teaching to start with?

Monty: Why did you choose Modern Languages?

Mrs Samuel: Well, Modern Languages are a way to communicate with many, many more people, and they are a bit difficult, so it’s a challenge. But it’s super fun, going abroad and being able to talk with people.

James: What sets you apart from other teachers?

Mrs Samuel: About a foot and a half!

James: Indeed, and can you describe how you would approach conflict in the classroom?

Mrs Samuel: Hmm, that’s a good question! Well, if someone is being difficult, it is because they are experiencing difficulties themselves. So obviously within the classroom, I would try to stop it as soon as I could, but then I would make an effort to understand what was going on behind the scenes.

Monty: If you had to be any animal, what would it be?

Mrs Samuel: Hmm, any animal… I would be… either a spider so I could take a hard look at myself and tell myself off for being so scary, or a seagull so I could fly through the air whilst eating other people’s chips.

Monty: I see. And, to finish off, what is the thing in your teaching career that you are most proud of?

Mrs Samuel: Erm, wearing matching shoes on a daily basis?! And always having at least fifteen board pens in my bag!

James: That is a very good thing indeed! So that concludes our form tutor interview, thank you very much Mrs Samuel, for allowing us to do this.

Mrs Samuel: You are both very welcome. Thank you boys!

I hoped you enjoyed that as much as me! If you would like to be our next interviewer, talk to your Form Tutor on Monday and organise it.

Maybe the best way to tackle this cold weather is to stare it in the eye, put your PE shorts on and go and run around a frosty course. That’s exactly what Rex B (2L) did:

Last Thursday myself and other Hampton runners went to Harrow School for the Middlesex cross country selection race. Having competed well in the first stage at Richmond we had all made it into the selection race for the Middlesex team. It was a cold and muddy day, with the course at its upmost difficultly. We were faced with steep hills, knee-deep mud and rocky terrain, but everyone raced as fast as possible. To be automatically selected you had to come in the top six. Then out of the next ten runners, two would be selected as well. There was stiff competition, but lots of Hampton runners made it into the few that are being considered for selection. We are still waiting on the final decisions; It was a great day of running with all years doing really well on an extremely harsh course. 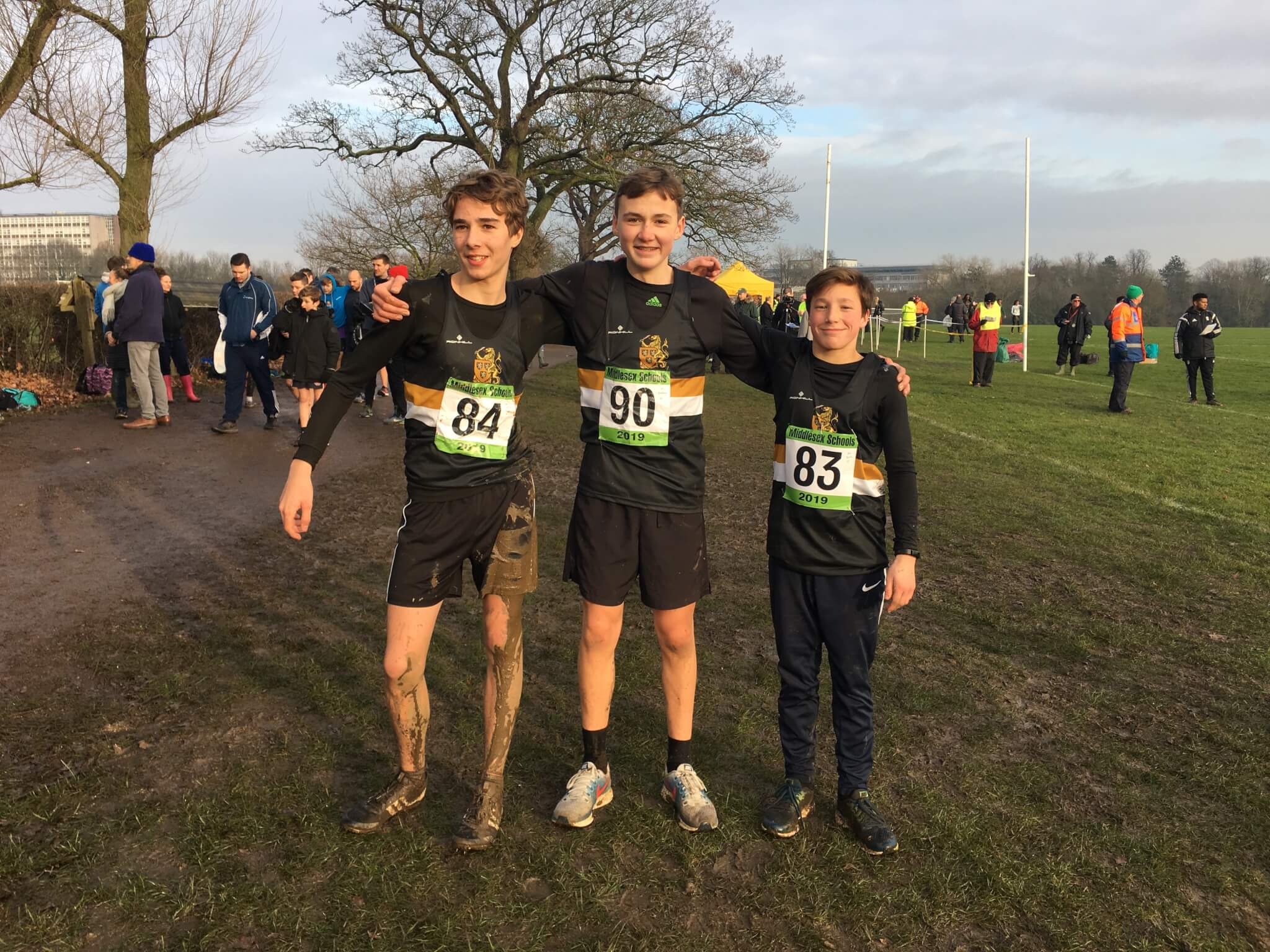 Well done to Rex himself, who finished an excellent 12th. Moving on, thanks to Ben R (2H) for sending in this report on the U13C Team fixture against Abingdon, written in the style of highlights from the match commentary I think:

The match kicks off with a start as Hampton has gained an early corner. Monty R (2W) steps up to the corner spot. The ball curls through the air and avoided every defender with maybe a touch on the way, but still settles in the back of the net. Another corner whipped in from Monty and a strong header from James D (2W) which explodes past the keeper. Hampton start running back but it is disallowed! Monty with some great individual skill, dribbling past three and scoring! After some great attacks and some great effort from Evan L (2B), Joe E (2B), Daniel E (2J) and Harry M (2L) in defence, keeping the strikers quiet. Into the second half, and an early goal from Ben R (2H), passing the ball through the keeper’s legs. A ball is crossed from Monty and Joe F (2J) controls but it is a penalty as a defender has collided with him. Daniel steps to take it on his debut and finishes it with ease. Monty receives a pass from Vishal S (2W) and finishes. Jack S (2H) passes it to Monty who crosses it to Ben who finishes a tap in. The game ends 6-0 to Hampton. Special mentions to Leo H (2B) on his debut playing a great turn in midfield and goal. Also some great saves from makeshift goalkeeper James.

You just heard about Daniel scoring a penalty on debut. He is in fact a January transfer window signing from Mexico! Kieran BR (2J) tells us more:

This blog submission is to welcome Daniel E (2J), a new pupil who arrived at the school and joined our class this term. Daniel lived in Mexico and is fully fluent in Spanish and naturally is the best at Spanish in our class! This has been an exciting time for me as I am quite used to joining school in the middle of a year or a term myself and starting off feeling very uncomfortable and that I don’t fit in. Having learnt from this experience, I made sure that I was as nice to him as I can be. I look forward to having a fun time with Daniel in my class for the rest of the year and beyond!

Welcome indeed Daniel, I do hope you are settling in well and I look forward to your first article for the blog!

Nobody got the correct answer to last week’s dingbat! I did tell you it was tricky. Lots of people thought it was Way too much which is fair enough because, to be honest, that’s what I thought too. In fact it was Too much information (get it? – in formation). Never mind.

Anyway, I didn’t set this one, Conrad K (2W) did. So it’s probably much better:

It’s a riddle of course – no need to start googling livestock statistics. A merit for the first few correct answers I receive.

Mountains of entries this week! In the end, I’ve gone for this one from Melan W (2H): 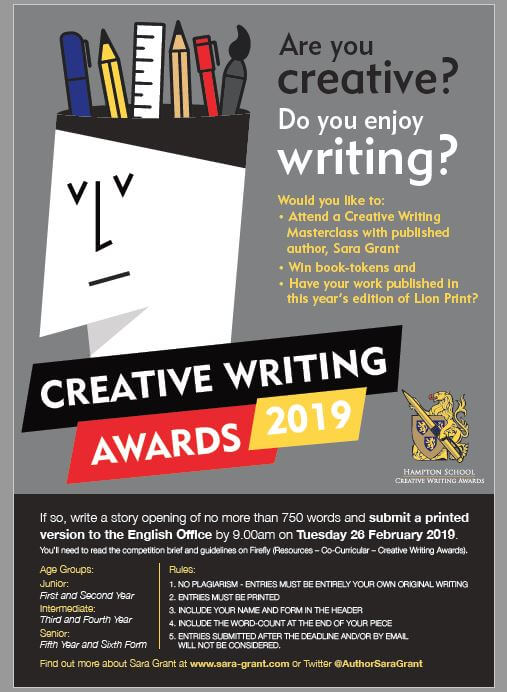 To enter, write a story opening of no more than 750 words and submit a printed version to the English Office by 9am on Tuesday 26 February.

You could win a place on a Creative Writing Masterclass with published writer Sara Grant. Book vouchers are up for grabs too, and the winners will have their writing published in this summer’s edition of Lion Print, Hampton’s Creative Arts magazine.