Congratulations to all these boys on reaching the following milestones:

It wouldn’t be summer in England without the sound of leather on willow. Let’s hear how some of the Hampton teams got on this weekend:

“On Saturday the U13B team played against RGS High Wycombe. High Wycombe started batting and Hampton managed to field well and keep their score down. We were doing well with one over to go, they were on 99 runs. Unfortunately, they managed to score 22 runs in the final over and end on 121 runs. We went in to bat and dropped a few early wickets. Later, Dhruv and Praveen came in and upped our runs by a lot. By the end of our 20 overs, we finished 8 runs behind. It was a great match and both teams played very well.“ Jamie Hacking

“On Saturday 12 May (the same day as my birthday!) the U12C team played a cricket match against RGS High Wycombe. The skies were cloudy but fortunately, it didn’t rain so the C team’s first proper match went underway. We won the toss and Arjun (Captain), elected to bat first. Arjun and I opened the batting and we batted out the first couple of overs to get used to the pitch and the bowlers. However, we soon lost several wickets. After a rather slow innings, Hampton finished on 78-6 with me getting out on the last ball of the innings on 20. RGS raced through the beginning overs, reaching 64-0 in 10 overs. However, we finally got a breakthrough where Cameron took a brilliant catch. They still reached their target but we all had a great learning experience. My lesson was to definitely go for aggressive batting when needed!” Akshat Mathur

Well done and commiserations to both teams.

Second Year students have also been blazing a sporting trail outside school. I am yet to receive a report of the Surrey Cup Final (next week I hope, Matthew S?) but Edward Clark has sent this report on his fantastic sounding end of season rugby tour:

“I went on a rugby tour last weekend with my club, London Irish. On Saturday, we played two warm-up games against the local teams. We won one and drew the other.  On Sunday we played in the Malone U13 Tournament. We played Waterpark (a local team), Malone (the hosts), Ballymenagh (Irish), Wrexham (Welsh) and a team from Scotland.  We won 3 and lost 2 games, giving us an overall result of third.” 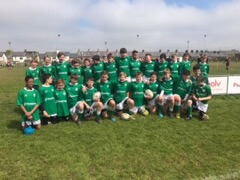 Sadly this week saw the end of the road for the Junior Quiz Team. Having been crowned regional champions, they were one match away from the national final. Thanks to Conor McNeany for this:

“The inter-regional round of the Junior Quiz Schools challenge took us to Oxford and the Dragon School. They were a very strong and very experienced team, who were very quick on the buzzer. We fought very well, but ultimately came out behind by nearly 200 points. The match felt a lot closer than it really was, but when we hopped back in the Quizmobile (Mr Hitchings’ words, not mine) we were returning as losers. It was a great experience and we did very well to get this far in our first year of the competition. A special thanks goes to all the teachers involved and we will hopefully be back better next year.”

This is always a fantastic programme to be involved with and boys develop invaluable skills for the future. Thanks to Aadam Shahzad for telling us about it:

“On Saturday 12 May, myself and several other second and Third Year boys travelled to Reigate Grammar School for a Model United Nations (MUN) conference. The Second Year represented the delegation of Peru. In the morning there were workshops that helped us understand the format of a debate and how to write a resolution. I learned a lot and found them useful when debating in our assigned committees. In the afternoon the debating began and topics such as youth participation in politics were discussed. Resolutions were passed or failed through a voting procedure and everyone was able say what their country’s stance on the topic was. Overall, it was a fun day were I learned lots, debated and made new friends.”

Lots of incorrect answers (“go to the shop and buy a 4 litre jug” was very popular) to last week’s trivia but only Mr Aucutt got it right and he can’t have a merit. The answer is here: http://puzzles.nigelcoldwell.co.uk/twentytwo.htm

This week, can you identify the following numerical sayings? All the vowels have been removed. Eg. NNLVS = Nine Lives

Why do you have to be quiet in the pharmacy?

So as not to wake the sleeping pills.