Welcome to a proper April addition of the Third Year blog. We’re all happily playing our summer sports (Tennis, Cricket, Athletics, Rowing) in the rain and the cold. So much for that heatwave we were enjoying. Cricket match reports will start appearing from next week thanks to captains Sandy Mitchel and Tom De Gruchy (aka “Goochy” when he plays cricket). This blogger is particularly looking forward to finding out more details about the U14B tied match against Harrow. Below is a roundup of the rest of this week’s action.

Inter-form quiz matches this week were as follows.

The play-off fixture will take some beating for overall quality: two very capable teams fought well but 3B eventually triumphed over 3H, 260-130. 3B’s Jake Green was a very impressive man of the match with seven starter questions.

The first quarter-final saw bookies’ favourites 3J start strongly against 3A and keep them out for most of the game, finishing ahead 240-80. Their captain Nayaaz Hashim was man of the match with four starters.

The second quarter-final was a titanic tussle, 3G and 3F very evenly matched, but when the dust settled, 3G were victorious, 160-120. 3F’s Toby Kerr had the consolation of man of the match with three starters.

Also on Friday afternoon, 3D had a slightly more comfortable win against an under-strength 3E outfit, 140-80, although man of the match Max Leman (three starters) did much to keep 3E close behind.

This week, Mr Studt was very impressed with the knowledge on display from both Forms in what proved to be a thriller of a quiz match between his form (3C) against 3B. It came down to the last question – 3C correctly identified the first part of “ __________; Shepherds’ warning”.

Good luck to Ed Finnet, Cameron Slade, Conor McNeany and Jamie Harrison who will be taking part in a Contemporary Dance Day for Gifted and Talented pupils on Wednesday 2 May at Orleans Park School.

The Rambert School of Ballet and Contemporary Dance will lead the event.  During the morning, students will work with a choreographer and student teachers on technique and creative skills.  The afternoon has been devoted to sharing work and creating a student performance, which will start at 2.15pm.  This will be followed by short performances by Rambert Dance School’s Spring Showcase and will finish with a question and answer session about dance study, performance, skills and choreography.

Staff and parents are welcome to watch the afternoon performance; please arrive at Orleans Park reception between 2.00pm – 2.10 pm.

Mr Carrier commends Nayaaz Hashim who has produced a piece of work – the Third Year Non-Violence Project – that is so exceptional he feels it deserves recognition.

Jai Saha has published his Arts Award activity book – there are two versions, one specifically for boys and one gender-neutral version. They will be on sale soon, with the proceeds going to Form Charity. Top effort Jai – thanks and well done! 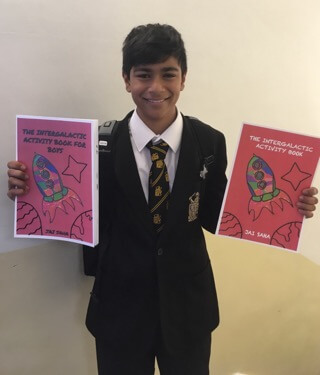