Welcome back to everyone after what was hopefully an enjoyable and relaxing Easter break. Many Third Year boys spent part of the Easter holidays globetrotting on one of the many School trips that took place.

Third Year cricketers joined with some Fourth Years to form an U15 cricket squad that toured Dubai and Abu Dhabi competing in a competition against Schools from the UK and the UAE. The boys performed well winning three of their four matches against strong opponents, finishing third in the tournament overall. The squad learned a lot from playing in challenging and unusual conditions. Freddy Seddon (3C) went on the tour and one of his highlights was to play in the fantastic Cricket Academy Stadium. Mr Trivedi is excited about the prospects for the U14 cricket team in the season ahead given their extensive preparations during winter nets and on tour.

Jamie Harrison and Oliver Pulfrey-Baker  report that the J14 Rowing trip to Exmoor was very physically demanding but fun nevertheless.

Theodore Tsiberopoulos went for scuba-diving lessons in preparation for the School diving trip to Malta. He will also do some diving with his Dad in Greece over the summer holidays.

Ollie Verny-White and Frazer Dunlop (both 3C) report that the Hampton U14 Rugby Sevens Team has secured fourth place in the country following the Roslyn Park Tournament at the end of last term.

Fred Darley, Oliver Pulfrey-Baker and Jack East took part in the Model United Nations competition during the first weekend of the Easter holidays. They won the Delegation Award and Oliver together with Fred won Highly Commended Delegate Awards.

Mrs Bartholomew is particularly impressed with a number of boys her English sets as they achieved full marks (20/20) in their reading projects. Well done to Samaksh Agarwal, Jonah Blake, Abhi Sundaram and to Sam Colvine.

Vathshan Ramanakanthan played a lot of Fortnite with his friends over Easter – at least two weeks’ worth.

The Third Year inter-form quiz started this week, with matches on Wednesday and Friday lunchtimes for the next two weeks. Matches this week were as follows:

The competition is a knock-out tournament of 20-minute matches. Each form must send a team of (up to) four boys to compete. Teams may be changed from one round to the next – draw as below: 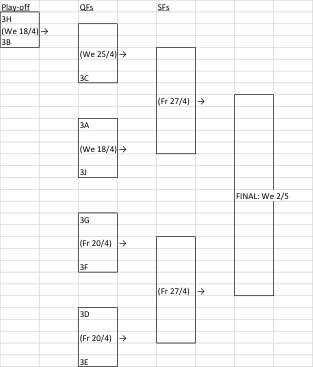 The format of the quiz is like University Challenge: each competitor will have an electronic buzzer, and a series of general knowledge ‘starter questions’ will be read out. Only the first person to buzz can answer; if they get the correct answer then they win three ‘bonus questions’ for their team to discuss and answer; if they are wrong then someone from the other team may buzz and win the bonuses if correct.

Points will be awarded towards the Wills’ Cup after this inter-form event.

And finally… a match report from the final match of last term for the U14D football team. Many thanks to Joel Arulpragasam, the U14D team captain, who has been writing and submitting match reports throughout the football season.

On the final Saturday of term, the U14D football team prepared for a freezing game against old rivals Dulwich. Alessandro Russell scored a hat-trick, including an exquisite scissor kick. Joel Arulpragasam was also on target with a low driven shot. The D’s won 4-3, ending the season in a dramatic but successful fashion.