Congratulations to all these boys who have reached the following merit milestones:

Keep up the great work!

Congratulations to Luke T (2H) who has this week been selected as the winner of the Junior Poetry category! Very well done to you Luke. I am hoping to feature the poem in next week’s blog.

What are you doing on Tuesday? I’ll tell you: you are going to the Lecture Theatre to watch an amazing event featuring lots of Second Year students that will feature things that have literally NEVER been done for anywhere in the world. As if that wasn’t enough already, it will raise money for charity too.

Miss Samuel is organising and kick off time is 1.15. Hampton School students will be breaking actual world records. The full list of records will be revealed on the day but we can exclusively confirm that they will include the most M&Ms eaten blindfolded with chopsticks in a minute. Please bring a pound coin with you and try to break a record yourself.

A bumper sports report this week with an avalanche of submissions and snow better place to start than the Alps (with thanks to Euan Gallagher):

“On 5 and 6 of March, Sam, Arjun and Euan took part in the Artemis Interschool Ski Challenge in both Slalom and Giant Slalom categories. There were multiple crashes on the Giant Slalom due to poor weather conditions, mixed with many successful runs on the Slalom course. Overall it was a good performance from all at the race.”

A special thanks to the high-flying Marcus Taylor for this report and for giving us a glimpse of elite-level gymnastics competition:

“I have been training for many years as a gymnast and last week I travelled to Liverpool to compete in my first British Gymnastics competition at the Echo Arena. It was great to see the arena transformed with all the equipment, lights and cameras. I was with my team mates and we got to do podium training on the morning of the competition and then competed in the afternoon. There was an official announcement and entrance for each gymnast with smoke and lights adding to the build-up. I competed in all six events which are floor, pommel, rings, vault, parallel bars and high bar and whilst I didn’t win any medals this time round I have learnt a lot and enjoyed being on the same equipment as Max Whitlock and Nile Wilson who competed there on Sunday.”

Well done, Marcus! The footballers were also in action at soggy St John’s. Jamie Hacking and Jack Farthing let us know how they got on:

“On Saturday 10 of March, the U13B team played against St John’s School Leatherhead. Hampton went ahead early with a great goal from Kyan. We then continued to score two more goals to make it 3-0 at half time. The second-half was slightly closer with no goals for the first 10 minutes but then an incredible free kick from Connor led to a goal from Cameron. The match ended 5-0 to Hampton.”

“The Hampton U13 C team had a very comfortable win over the weekend, winning 12-0 against St John’s School, in Leatherhead. The scorers were Jack Farthing, Albie H, Charlie M, Will K, Theo J-P, Daniel E and Ben F. Unfortunately, we only played a 40 minute game due to waterlogged pitch so who knows what the score could have been had we played the full game!”

And the rugby players have also been in action. Nick Allen & Henry Donaldson tell us all about it:

“Last Wednesday afternoon, the U13 Sevens team played at the Orleans Park Sevens tournament. After a quick warm up, we played our first game against Orleans Park B, winning convincingly (40-0).

We went on to win the next two games against Isleworth and Syon, as well as Fulham Boys Schools, both 35-0.

These results meant that we won our group and faced second of the other group, which was a repeat of last year’s final, Orleans Park A. We went on to win against this tough opposition 30-10, meaning that we played Gunnersbury School in the cup final.

Unfortunately, we lost this match 5-20 against a well-drilled team, meaning that we came second overall in the competition.”

Special thanks to Aadam Shahzad for this report on a DT competition that involved a range of challenges from designing toothbrushes to making bread. It sounds like the boys really had to use their loaf – would they be bristling with good suggestions? Or would their ideas be half-baked?

“On Monday, myself and several other second year boys travelled to Tolworth Girls School for a DT event. In the morning we did food tech and baked our own bread and we chose a target market that this bread would appeal to. Next we had to design shelters that would be of use in natural disasters. First we made a plan and then we made a model showing what it would look like. Finally, towards the end of the day we presented a design we had come up with for a toothbrush and we had to come up with its features and the problems it solved.”

There has also been the fantastic school Science Fair this week and a full report will feature in next week’s edition.

Finally, thanks to Kristian Wells who has sent in this drawing to get our engines running:

“The Geneva Motor show is the biggest car show of 2018. These are only two of the cars introduced at this event. The one to the left, is the Hennessy Venom f5. The one on the right is the Lamborghini Terzo Millennio (KW) 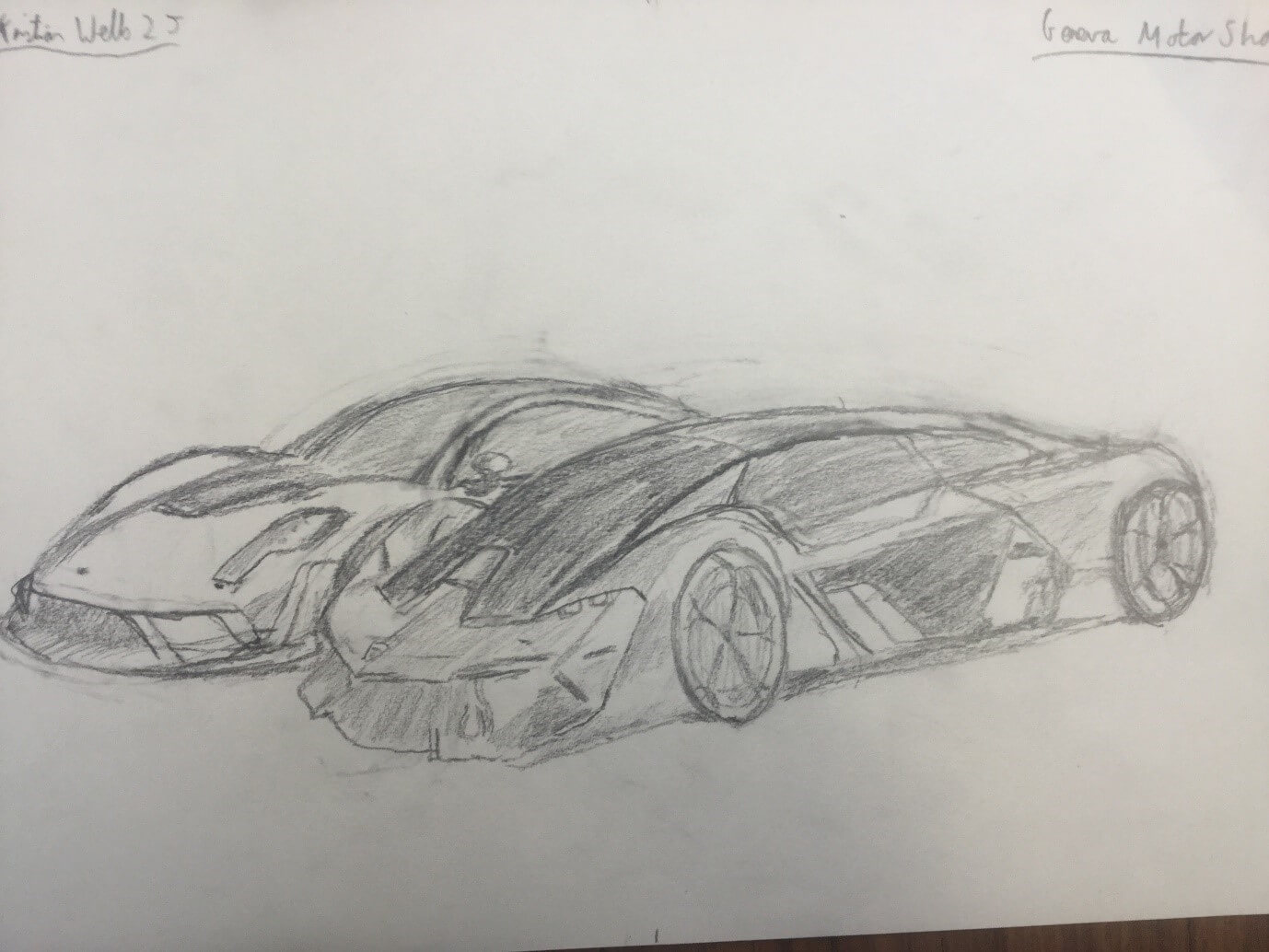 Trivia Question: There are only two words in English which contain 5 Es: what are they? A merit for the first correct answers – go on, it’s eeeeasy!

This week’s Joke of the Week comes from Joshua Maisuria-Hull:

How do you make gold soup?