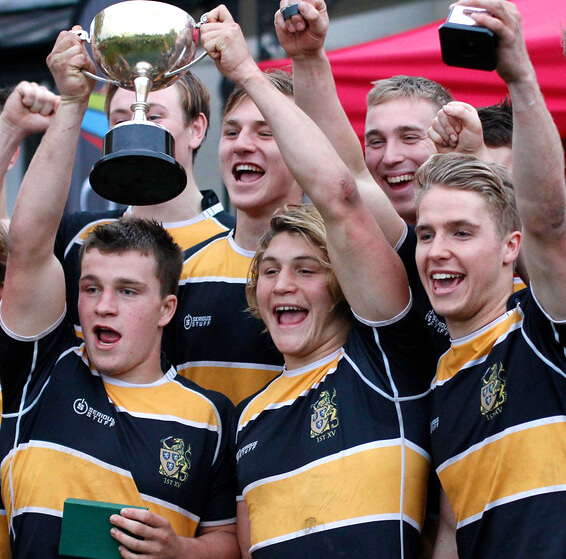 They impressed in every facet of the game, from scoring over sixty points in a group game against the Eastern Barbarians U18, to only conceding one try throughout the entire tournament, a brilliant defensive effort spanning seven games.

The team put in excellent performances on the first day to progress through the group, doing so without conceding a single point in games against Solihull, Eastern Barbarians and hosts St Joseph’s.

However in their day two group they were drawn against a strong Merchiston Castle side, the impressive Brighton College and Cranleigh, to many the favourites to take the title. The team overcame Merchiston though, beating them 22-0, and consolidated their position with an 8-0 win over Brighton College.

This set up a mouthwatering final group game between Hampton and Cranleigh with the winner guaranteed a place in the final agains RGS High Wycombe. It proved the toughest game of the competition so far, but the team eventually managed to secure a 17-6 win with tries from Matthew Wheeler and Luca Cericola, as well as seven points from the boot of Ben Seddon.

This meant Hampton would contest the final with RGS High Wycombe, who themselves had impressed to reach the final, finishing top in a group that featured Millfield and Dulwich College. Hampton took an early lead with another try from Wheeler, with Seddon kicking a penalty a few moments later to open up an 8-0 lead. From there the team put in a monumental defensive effort, inspired by captain and Player of the Tournament Roman Malin-Hiscock, to limit RGS High Wycombe’s field position and attacking opportunities. Although the team conceded a late try, their first in seven games of tournament action, they held on to win the final 8-5.

After the final whistle, the boys went up to collect their medals and receive the trophy for the first time in The School’s history.

Hampton’s Director of Rugby, Mr Sean Thomson, was delighted with the team’s performance over the weekend:

“The boys were outstanding all weekend and can be incredibly proud of the way in which they approached each game. To win the tournament is an amazing achievement but to only conceded one try over seven games is almost more impressive, it took until the final three minutes of the weekend for another team to get over the line. The St Jo’s Festival is a massively gruelling event in the schools rugby calendar and to come away with the trophy says a lot about the character and desire of the 1st XV squad this season. It would be unfair to pick out individuals as all twenty-four members of the squad contributed to the success this weekend but the way in which Roman led from the front, both in attack and defence, means that his Player of the Tournament award, which was voted for by all the coaches and referee’s, was truly deserved.”

For more photos of the St Joseph’s Festival, visit www.epicactionimagery.com/Sjcrugbyfestival15