I hope that everyone has had an enjoyable week – it’s been a busy one indeed for the Third Years! The cricketers were in action at the weekend in stunning conditions against Dulwich College…you can read about some of the action in the Sports Round Up below. On Monday, tutor groups 3E and 3F completed their First Aid training, where they were learning how to deliver CPR in an emergency situation. In the afternoon, many members of the Third Year were giving tours to prospective parents and pupils during Visitors’ Afternoon – well done to those involved for representing Hampton so well. Wednesday and Thursday saw excellent performances of Electra, a play involving members of our Third Year and Fourth Year alongside LEH pupils. After revision scheduling and study tips being featured in recent PSHE sessions, this week exam preparation remained the focus but from the important angle of managing wellbeing during what can be a busy and stressful time – remember to keep up your hobbies, get lots of rest and eat good quality food!

I hope that you enjoy reading the blog and that you have a great weekend ahead!

We had a fantastic evening on Thursday watching the Third and Fourth Year production of Electra at LEH on Thursday evening. Everyone involved on stage and behind the scenes should be very proud of the quality of the show. Well done to the Third Year Hamptonians involved – Monty S, Rafi G-N and Joshi R.

Third Year Exams will take place during the week commencing Monday 23 May (the week before half term).

Each pupil should receive an email to their School email account with a personalised exam timetable within the next few days, so please keep an eye out for this.

Keep up the good work over this weekend and into next week. Stick to your revision schedules. Continue to be thoughtful and kind to the people around you. As always, let us, your Form Tutors or the relevant subject teachers know if you are having any difficulties.

Last weekend, Hampton’s U14C’s took on St Benedict’s in our first away fixture of the season. We went in with a positive attitude and bowled first, with Ed M opening the bowling.  He was unlucky a few times before snatching our first wicket in his second over. From then on Hampton’s bowling attack was ferocious with almost everyone with a wicket to their name. Hampton ended up bowling St Benedict’s all out for 24 runs. Feeling confident going into our batting, the opening pair of Rocky M and Will McT did enough with brilliant shots played between the two of them and Hampton claimed a comfortable win, winning by 10 wickets.

Last Saturday, the U14C Cricket team played Dulwich College. We lost the toss and batted first. Our opening batsmen (Arun B and Avi B) got us off to a great start. Especially Arun B who scored 30 off 29. When Avi B got bowled out, Ed M stepped up and scored an excellent 44 off 54 not out. This really gave us the edge over our opposition. At the end of the first innings we finished with a respectable 182 runs from 30 overs. Then it was our turn to field and we kept our bowling and fielding tight right through to the end where our wicket keeper (Gabrielle C) saw the batsman too far from the stumps and was able knock the bails off before he could get back to secure our victory. A well-earned victory for our team.

On Thursday 5 May, 20 pupil from Third Year and Lower Sixth travelled to the famous Iffley Road, Oxford, where Sir Roger Bannister ran the first ever sub four-minute mile. Everyone stepped on their coach/minibus eager to see and admire the beautiful track accompanied by some great views along the way. Upon arriving, everyone began to warm up promptly as we caught up with the rest of the group. Schools such as LEH, Harrow and Eton were amongst those competing and we made it clear that we had a good attitude towards all the teams throughout the day. The Third Year races started with the 4x100m. A strong team of Sam MJ, Omar K, Quinn S and Daniel M raced against the clock and focused on their own running throughout the race. This led the team to winning the relay in the heat. After Quinn, Omar and Daniel departed early for various reasons, the remaining six Third Years had to compete in the last two races. First came the 4x800m, Arjan W, Jayden O, Ruben B-R and Eddie H had agreed to race in this. After a strong two laps from Ruben, Arjan and Jayden put in a good shift with Eddie finishing it off with a solid time. Arjan and Jayden had just an hour to relax however as the 4x200m grew nearer. Sam MJ, Thomas D, Arjan W and Jayden O all did their part in the 200m. After Jayden had a strong opening putting us in the lead, Arjan and Thomas worked hard to help the baton on to Sam, who overtook his man down the home straight. Everyone was ecstatic about this until they had found out the changeover from Jayden to Arjan resulted in an unfortunate disqualification. However, the team continued to show great teamwork as they brushed it off, focusing more on the time than the place. It was a joy to watch the more senior events with our Third Year team getting involved as much as they could cheering on the other Hamptonians. From all the relays we competed in, the team gained confidence and their mentality towards the races was great helping us to get better times overall. The day was an enjoyable, fun experience for everyone. Well done to all the Hamptonians who competed and thank you to the coaching staff that accompanied the trip and motivated the teams towards success. On to the next one! 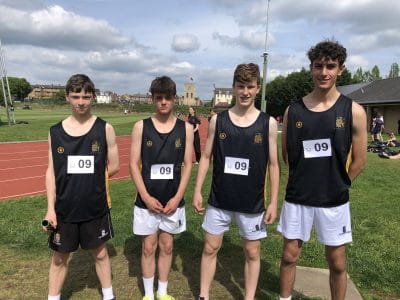 The revolution arrived at LEH this week and with it a dose of revenge! Electra-fying performances and bucket loads of talent delivered two great shows, to an entertained audience. It has been an exciting experience to be a part of the production over the last 15 weeks. Electra is a Greek mythology set in modern times telling the story of a murdered king’s children taking revenge on their father’s killers.

Some of the Greek names were a bit of a tongue-twister and I did get locked in LEH for one rehearsal! But it has been such a pleasure to be part of the cast. Shout out to my fellow cast members Joshi and Rafi for some amazing performances. We are the revolution! 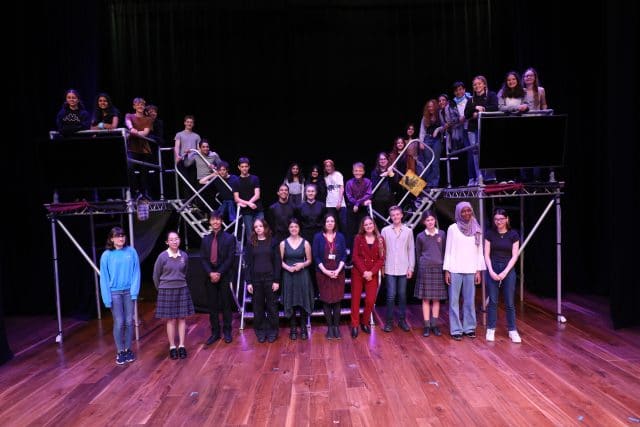 On Tuesday last week, I left School early in order to sing a joint evensong with the choir of Christ Church Oxford for the first time. I met up with the choristers from schools all around the area, including two other Hamptonians and got the coach to Oxford. We arrived at 4pm and were wowed by the brilliance of the college. Soon, we found ourselves looking at ancient manuscripts by Byrd, Tallis and Handel, some of which we have already sung. Both Hampton Court, where I sing, and Christ Church were founded by Thomas Wolsey, and it was a historic day as the two choirs came together. Christ Church is the only Oxford and Cambridge College to have a cathedral, and it did not disappoint. After an hour rehearsing with their choir, we put our robes on and it was time for the service. We sang some incredible music, including Ye Choirs of New Jerusalem by Stanford. After the service, we ate in a huge hall, filled with old paintings, which actually was the inspiration for the Harry Potter films.

Last week Mrs Reilly gave us two truths and a lie – well done if you guessed that Mrs Reilly making it to the final six of Project Juno Astronaut selection was a lie!  3F Tutor Mr Lees is up next…can you find the lie?

Which supervillain is Batman’s nemesis? Joker

Which band sung the song ‘Don’t Stop Me Now’? Queen

What does the Tinman wish for in the Wizard of Oz? A Heart

The ‘Golden Bear’ is the nickname of which golf legend? Jack Nicklaus