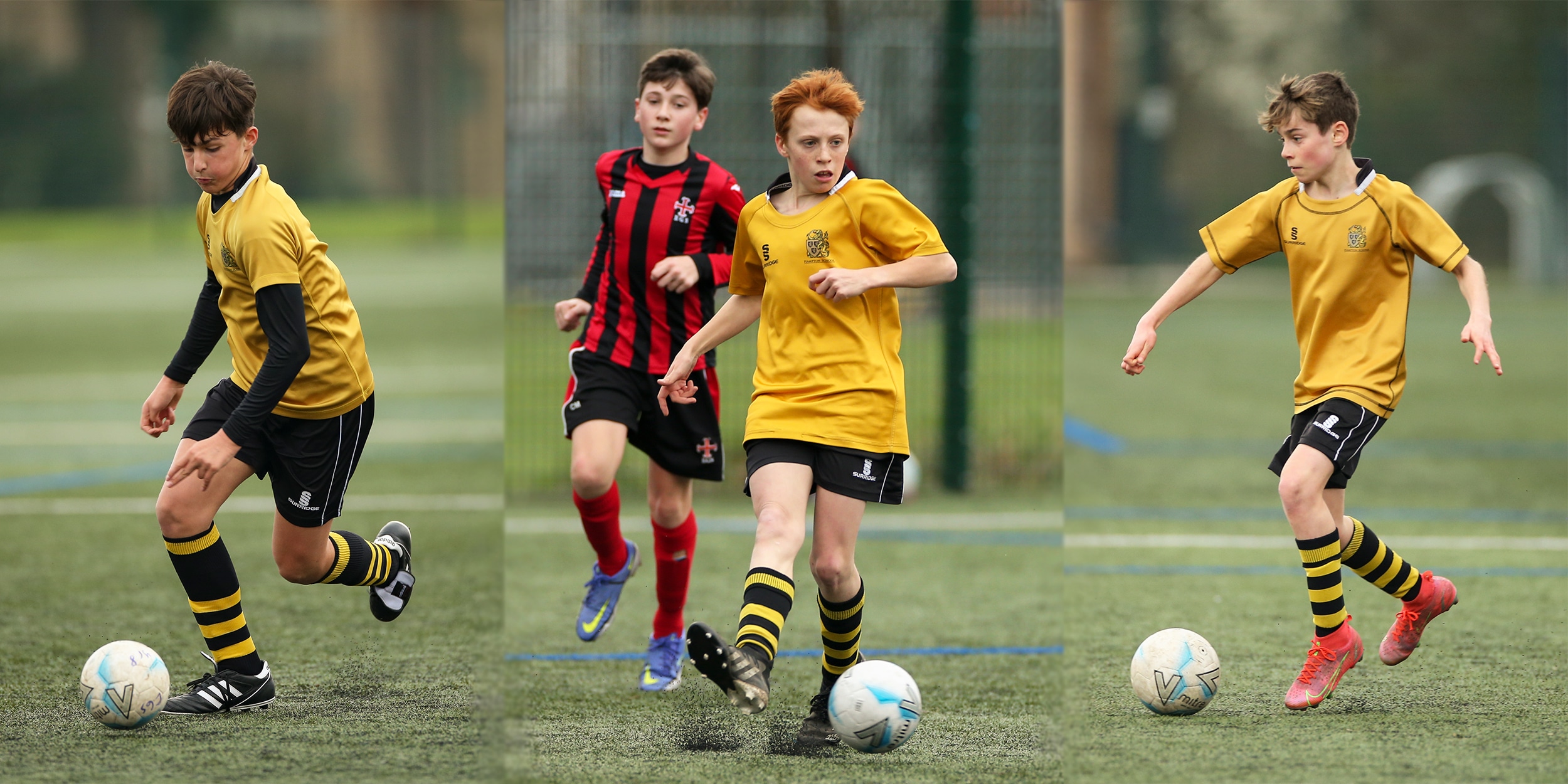 Lots going on this week in sport, thank you to our Blog Reps for some brilliant match reports! Next week we have Character Day to look forward too – so a reminder to get crafting your outfits over the weekend!

This week on Thursday, our Rugby team recently played in a sevens tournament to be the champion of all of Surrey! Seven’s is a type of Rugby you can play. It consists of seven aside rugby on a full pitch and requires tons of stamina and lots of running! We had to travel all the way to Trinity Croydon, which is very far away, and had to get to school at 7:45.  Hampton school was in group A, that being one of the highest in the tournament so we had some very tough teams! We were up against Trinity Croydon, Epsom, Dulwich and St John’s school. The boys nearly won all these matches, unfortunately losing by one to a formidable Trinity Croydon, however, we got into the finals to compete for the title of championship in all of Surrey! It was tense but Hampton was victorious with an 8-3 finish! They are the champions of Middlesex and Surrey now! Great job to Harry Drewery (the wonderful captain), Jack Holden, Cyril Bellamy (who played excellently), Aiden Hughes, Sebastian Habdank-Toczyski, Lucas Stynes Tres, Stanley Amor, Owen Parker, Jacob Welch, Tom Boardman, Samuel Miller and Fraser Kerr! Great job! By Lucas (2P) 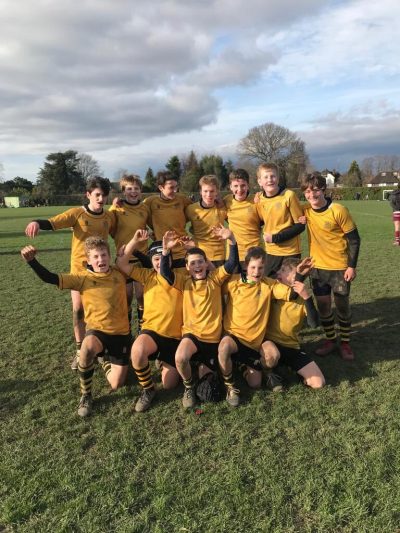 On a sunny, Saturday morning, five Hampton U13 teams took to the fields to play a notoriously tough block fixture against St Paul’s School. After some time off during the half term, the Hampton footballers took no time to get back into their stride as they notched up three wins, one draw and only one loss. The A and B teams both came away with emphatic victories – the As a comfortable 5-1 win and the Bs a 7-0 rout. The Cs were unfortunate not to win, as their game ended up a 2-2 draw, but the Ds were also very impressive as they ran out 6-0 winners. Though the Es were unfortunate to lose 3-0, it was overall a very successful morning for Hampton U13 teams and they will hope to continue this form as we enter the final half term of football. The U13As will play Enfield Grammar School in the ESFA semi-final on Thursday 3 March, the result of which many of you reading this blog will know. By Alex (2F)

And a great result for our U13A team who have made School history on reaching their ESFA National final with a hard-fought 3-1 victory in the semi-final match against Enfield Grammar School. Find out more here.

On Saturday, the Hampton U13 Ds and Es faced off against the corresponding team of St Paul’s. Both were playing on the 3G pitch in the bright sun and pleasant breeze. Unfortunately, the E Team, whilst they played well, were defeated 3-0 by a strong St Paul’s side. The D Team match burst into action as soon as the ball left the centre circle. After a short span of possession from St Paul’s, Hampton stole the ball and dominated play, with multiple runs and attempts early on in the game. Our hard work paid off, as a ricocheted pass from out wide fell into the path of Dylan, who had no trouble in tucking it away off the right post. Soon after, our second goal came from the foot of Arish, who blasted the ball into the top left corner. In fairness to the opposing keeper, his height had him at a disadvantage and he still managed to get a finger to the ball, deflecting it backwards into the net. However, just before half time, St Paul’s had their stroke of luck, with their centre forward slipping the ball into the back of the net just before the whistle blew. Half time came and went, and Hampton, motivated by their rare lead, grabbed four more goals in quick succession, with Dylan getting his hat-trick and scoring his third in the latter half from out of the box! Arish also scored a second, and then our subs came on and the pressure failed to relent, with a post and a crossbar hit, and finally a well-earned goal, from Teddy, and a well-placed half-volley from Elio, after a deflected shot from Ameya. And whilst St Paul’s got a second, the match finished 8-2, a big win, and the weather reflected our moods perfectly. Thank you to the football staff and St Paul’s for organising the fixtures, and thank you to Ms Havord, our coach. By Ben (2J)

Well done to everyone that took part in the inaugural Hampton/LEH STEM Fair. The judges were impressed by the scope and quality of the research undertaken, which made choosing the winners a challenge. In the end, Mr Wilson and Mr Brittain decided to also award ‘honourable mentions’ to the groups that were in strong contention for first place. Well done to everyone who entered! 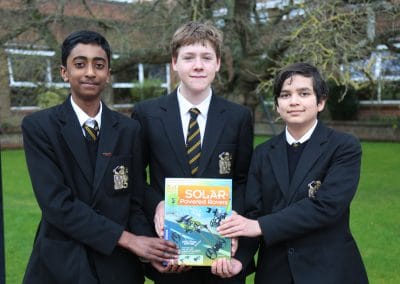 Aditya Kirthivasan 2B, Advait Bendale 2B, Anirudh Shidlagatta 2B – How much weight can our homemade drone take and still fly?

Well done to Aditya Kirthivasan (2B) who recently passed his Grade 5 guitar exam with merit!

Calling all budding authors! With Book Character Day fast approaching, the English Department are launching an exciting creative writing competition just for Second Years. So, if you’ve always fancied seeing your work in print, why don’t you have a go and enter, for your chance to win book tokens and have your entry published in this year’s Lion Print magazine. Find out more from Neel, Max, Johnny, Patrick, Arun and Alex:

Entries must be based on the genre of dystopia and should be no more than 500 words. The deadline for entries is 4pm on Wednesday 20 April 2022 and all entries should be typed and submitted to Mr Ellsworth o.ellsworth@hamptonschool.org.uk. The winning stories will be selected by Sarah Govett, author of The Territory. If you have any questions, please see Mr Ellsworth in the English Department.

Marcus S tells us about a recent cross county race he took part in:

Last weekend, I took part in the biggest cross-country race I have ever done. As I walked into the venue, I just saw thousands of people gathered round with tents. In my race, there were over 400 people from across the country all lined up on an 80m long start line. When the race started, I got a good start and managed to get to the front. The race started on a tough hill and continued to be very hilly and muddy! In the end, I was able to finish ninth with a sprint finish at the end. Finally, after the race was finished, I realised that Alex Yee, Olympic gold and silver medalist was racing in the senior men’s race. Overall, it was a brilliant experience and I would love to do it again. 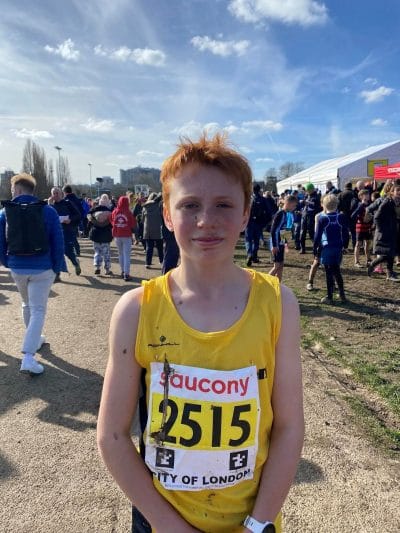 Welcome to the Weekly Questions! Every week, we’ll post 10 general knowledge questions, and, if you have a go, you can be awarded a merit if you send your answers to Miss Kugele (r.kugele@hamptonschool.org.uk)! This week’s Paralympic themed questions have been set by Joshua (2B)