Not long now until the end of term and it’s been nice to finally experience some spring like weather! Our Rugby and Football players have been busy again this week and we’ve had the start of our Interform quiz competition. Finally Character Day today has been a fantastic way to finish the week!

Today’s character day was certainly the highlight of the week and proved to be another really fun event with some fantastic outfits on display, including; Bananas in Pyjamas, Hercule Poirot, Harry Potter, Sherlock Holmes, James Bond, and Men in Black. Take a look at some of the fantastic costumes that walked the Hampton School corridors today:

Well done to Leander (2W) on his fantastic costume as Marvin the Paranoid Android from The Hitchhiker’s Guide to the Galaxy! 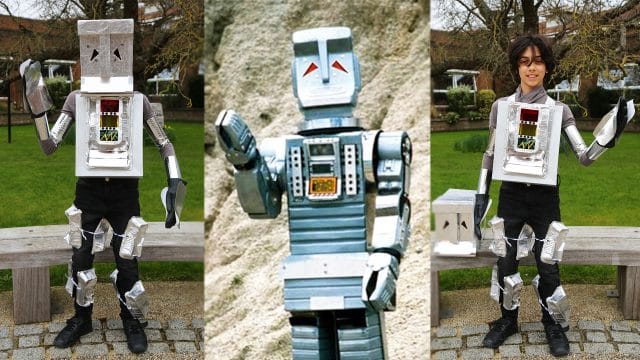 Thank you also to Leander (2W) for writing this report on the recent Model United Nations (MUN) event!

We arrived at Magdalen School Oxford and split into our respective committees. I was representing human rights for the delegate of Canada. In human rights, we debated several different topics including the treatment of the Uyghur Muslims, FGM and Neo-Slavery. We then had our surprise emergency meeting in which the fictional situation was that Israel had begun an invasion of Lebanon after they assassinated the Israeli prime minister. My clause on ensuring the safety of the Lebanese people passed with a large majority. I really enjoyed the bowling and restaurant too!

The rugby sevens teams have been back at it again! On both Saturday and Tuesday, they have been in two full rugby sevens tournaments! On Saturday, we had the same line up of Hamptonians, who were ready to go to Warwick (a very long drive!) There we played lots of teams from many different places, most from Wales! The pitches Hampton were playing on were astro. Luckily, we had been warned about this so we all wore protective armour- AKA skins! We played very well against many Welsh and English teams and we did so well that we got into the final! Unfortunately, before the team could play the final, we had a very long two hour break to overcome and sadly weren’t then on the best of our game in the final and lost. However, we had still come second out of all the teams and lost to a very good Welsh academy side.

Later on in the week, we played once more on Tuesday. Sadly, our captain had a broken arm so was out of action. Furthermore, one of our wingers also has an injury. Still the boys continued and played very well! In our first pool, we won most of our games but lost to Wimbledon (potentially due to some bad calls from the referee!) Still we were in the finals and played our last few games. There was a large complication though, most of our players had been injured and couldn’t play! This was a very big problem because we had little to no substitutes. Our final seven played the final two games and fought very well, winning one and losing the other. In the end, we were third which is still very good! The rugby sevens team should be really proud of themselves! By Lucas (2P)

Last week on Thursday, Hampton’s U13A team travelled for one hour to North London to face Enfield Grammar School in the ESFA Cup semi-final. Although Hampton started the game with a slow start by conceding a goal in the first minute, the Hampton side created history as they were the first ever U13A Hampton team to reach a national cup final. Before half term Hampton lost their second game of the season against Dulwich in the ISFA Campaign’s Semi-Final. So, last Thursday was their second semi-final of the year and the squad was determined not to lose again and reach the final. Hampton’s star striker Rio Felenov Tzanev once again found himself on the score sheet by netting two goals. Marcus Solomon added another goal to his season tally in the fiftieth minute of the game to seal the win, and the U13As will now feature in the ESFA final facing Chesterfield High in the summer term. By Omer (2F) 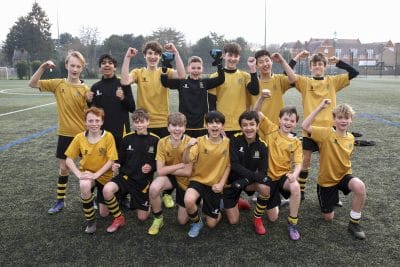 Hampton U13A team made history last Thursday as they triumphed over Enfield Grammar School with a 3-1 victory to make it through to the final of ESFA, the national competition for English footballing schools. After being knocked out in the semi-final of ISFA by Dulwich College, the U13s went one better in the national competition, making the final. Marcus Solomon scored one and Rio Felonov-Tzanev scored two in the 3-1 win, with Felonov-Tzanev notching up his 39th and 40th goals of the season. It has been an immensely successful year for the As, as they have worked together as a team from day one and have chalked up some brilliant results along the way. The ESFA final will take place around in the summer term, and Hampton will play Chesterfield High School. By Alex (2F)

This competition kicked off on Tuesday!

Each Form will select a four man team (and not necessarily the same four each time, team members can be rotate between fixtures).

The format is very similar to University Challenge (the only difference being that bonuses can be passed over to the other team).

Reminders will be sent before fixtures but there is an overview of the tournament structure below:

Supporters are welcome if they have the self-control to watch silently! We will hopefully have some match reports for you next week!

This week saw the Hampton community mark International Women’s Day, and celebrate just some of the inspirational women who have made an impact on our lives:

Welcome to the Weekly Questions! Every week, we’ll post 10 general knowledge questions, and, if you have a go, you can be awarded a merit if you send your answers to Miss Kugele (r.kugele@hamptonschool.org.uk)! To celebrate the start of the inter-form quiz, this week’s theme is general knowledge by Joshua and Ben (2J)