Who can believe that the boys are already halfway through their first year at Hampton?! It has been a very busy final week of this half term for the First Years, and they are certainly all ready for a good rest now! The boys have been getting stuck into some new clubs during No Limits Week, which kicked off with the inaugural Inter-Form Chess competition. Well done to all those who played and came to support their classmates – congratulations to this year’s victors, 1J, who won all three of their finals matches! We hope that the boys enjoy their holiday, and look forward to seeing them ready and raring to go for the second half of this term!

A reminder that Project EXPLORE launched this term; this is an optional project for boys to make a piece of creative work based on a local landmark. With half term now upon us, this is the perfect time to visit a local site and get some inspiration!

The last week of half term is No Limits week, where the Lower School boys are encouraged to try out different clubs and broaden their interests. Charlie E (1W) reports on what goes on during No Limits Week:

No Limits Week is a fun event that has a main purpose to introduce new experiences to 1st, 2nd and 3rd year students. In No Limits Week, students receive a yellow card in which they write down 3 new clubs they want to try out. In this special event week, the clubs do a special session where they showcase the main elements of the club to try and get people to join. This special event is created to expand students’ palettes of creativity in order to be fully well-rounded which is important in this competitive world. If they attend the club and don’t fancy continuing, the students are not required to continue with the clubs unless they signed up for one that needs to be continued every week.

Pupils feel that the school should have more events like this saying that it’s fun and a great way for them to who find out new things that they like. Farhan from 1W said “The school is doing so well pushing us farther, this is why I choose Hampton,” and Maxim 1W said “It was hard choosing, there are so many great clubs but my rugby training always overlapped so it is nice to be able go to these clubs.” As you can see from these quotes, Hamptonians love No Limits Week and look forward to it next year!

Take a look at some of the clubs First Year Hamptonians took part in during No Limits Week:

1. Which types of people do you recommend this club to most?

People who like to express themselves through talk and games.

2. What have you recently been doing in Drama club?

Every week we play new, fun drama games and I am always sad when it’s over each Thursday lunchtime.

3. Do you find Drama club enjoyable – what part do you particularly like about it?

I and everyone else who attends this club loves it for all its chatting and games and different roles plays each week.

4. Do people that come need to be very good at drama or can everybody come no matter how high their level of skill is?

At Drama Club (Thursday lunch 1.10pm) there is no level of skill and lots of boys who attend previously never tried out drama but got into it well. Also, every boy who is new to the club turn into brilliant actors, I myself have seen the progress everyone there (including myself) has made during their time there.

Josh M-J (1J) reports back on a successful Badminton fixture against Whitgift School:

Last Friday, a Badminton fixture was held between Hampton’s U12A team (12 people) and Whitgift’s U11A team (8 people). We met at the Sports Hall at 2:40pm during games and did a short warm up. After the warm up we each played four doubles matches, in which Hampton won 14 and lost 10. After this, we each played two solo matches, from which Hampton won 13 and lost 10. After a few challenging games, Hampton won overall (27-20) in what turned out to be a challenging yet enjoyable fixture. If you would like to take part in the next Badminton fixture, you could go to Badminton Club which takes place on Tuesdays in the Sports Hall from 12:35pm.

In the opening minutes of the game Kingston were on the attack, their star player penetrated through Hampton’s defence and took a lethal shot on goal. The ball zipped through the air and nestled itself in the top right corner to put Kingston in a winning position. Approximately 15 minutes later the Kingston keeper, from a goal kick, lobbed the ball up to their centre forward. He controlled the ball with ease and then displayed a fantastic turn opening himself up to a one-on-one with the keeper. He took a shot but Harrison G (1J) made a class save but unfortunately left the opposition with a corner. The ball was whipped in and a player was left unmarked causing him to have a free header – which to no-one’s surprise – he powered the ball into the bottom corner to give Kingston a two goal lead.

With the second half under way Hampton had gained control, showing signs of some amazing play and in the sixth minute of the second half Brennan C (1H) took a shot from outside the box, it whistled through the air but the keeper made a vital save however he conceded a corner. Brennan crossed the ball in and Ollie K (1H) pounced at the ball scoring a magnificent header to get Hampton right back into the game. In the closing minutes of the game Hampton needed an equaliser but unfortunately Hampton conceded a penalty. Their striker stepped up to the ball and drove it into the bottom corner. At this moment Hampton realised their semi-final dreams were over as referee blew the final whistle. 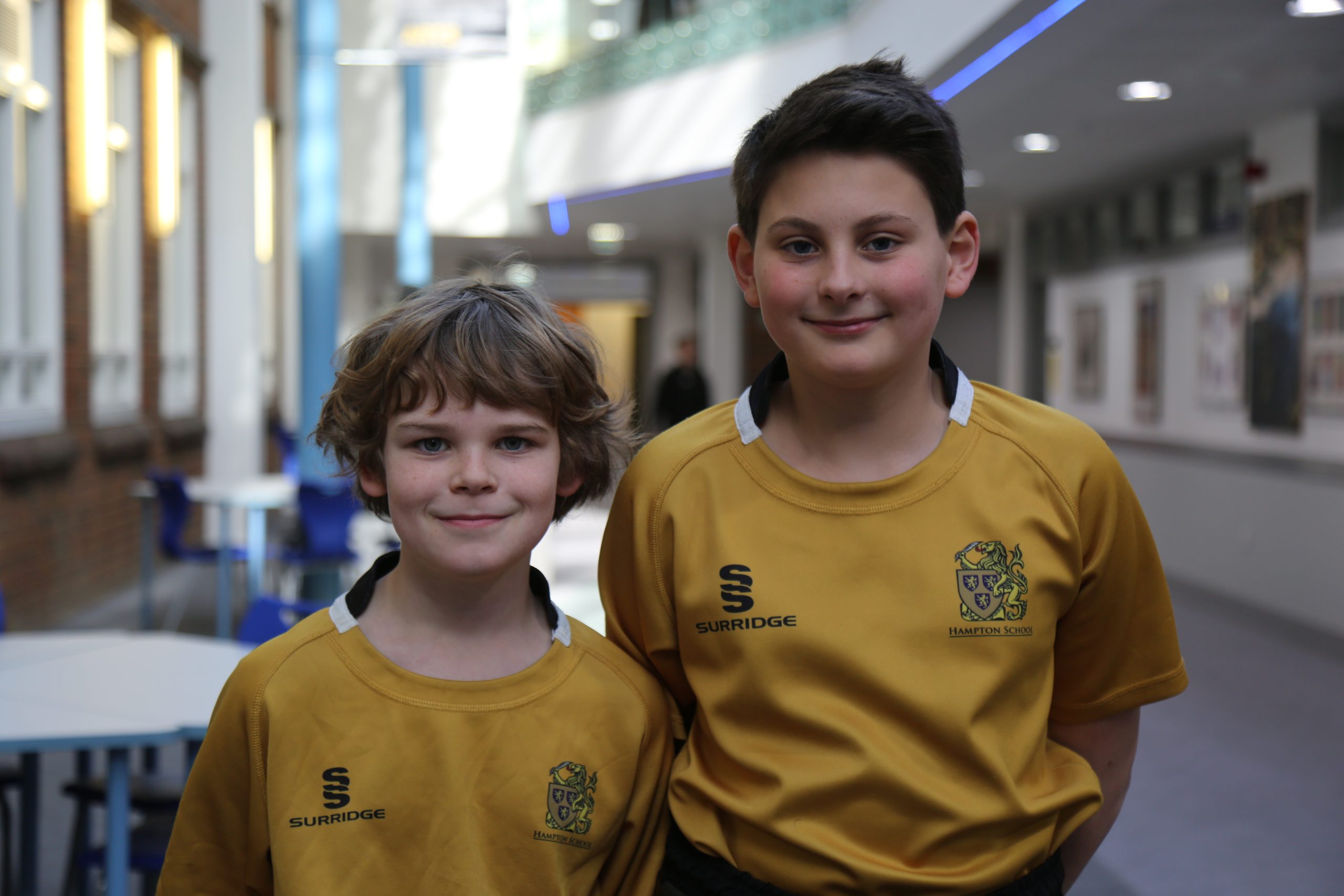 This week’s Tutees of the Week are Alfie K and Ollie N and (both 1F). Alfie and Ollie have really supportive to their peers, creating an online group to support each other while isolating with Covid. Well done, both!

We love to hear about what you have been getting up to outside of school. Please do send any information about any of your achievements through to Mrs Ziegler (h.ziegler@hamptonschool.org.uk)

We had an impressive 22 entries for this week’s First Year 5 Questions. 1L are champions once again with seven entries! Well done to everyone who entered!

HAVE A GREAT HALF TERM BREAK!