It has been fantastic to see you all back in school this week! I am sure that you have enjoyed seeing all of your friends and being taught in person in a classroom again. It will also certainly have been a shock to the system, and I bet you are all feeling tired and are looking forward to a relaxing weekend. Really well done on a successful return to school!

We had the excitement of the final of the inter-form quiz this week. Thank you to Shane (2P) for writing the following report. Well done everyone!

On Wednesday 10 March, 2P and 2J matched up in an intense inter-form quiz final. With both forms watching the event unfold, the quiz begun. 2P gained the upper hand with some very challenging starter questions. 2J came back with some impressive answers but then the 2P team (consisting of Nathaniel Carson, Joshi Rasi de Mel, Leo Robertson and myself) went on a roll. The quiz finished 360 – 90 in favour of 2P. Well done to all the members of both 2P teams and everyone else who participated in the Quiz.

Take a look at the boys in action below:

Some reminders and key dates for you:

Calling all aspiring actors! It’s time to audition for the much-anticipated Lower School Summer Show. This year’s production is The Terrible Infants – a collection of “deliciously dark” stories of naughty young people getting their just deserts. Second Year auditions will take place on Wednesday 17 March from 12:35 to 2pm. There’s nothing to prepare, just turn up at the Drama Hall in the Garrick on Tuesday. Hope to see lots of you there!

More information can be found in the poster below: 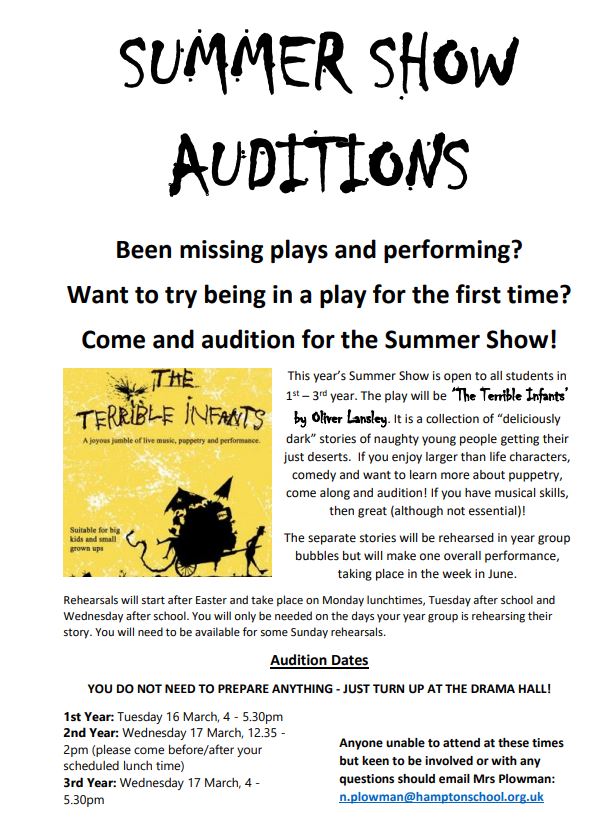 Our budding young artists have enjoyed being back in the Hampton School Art Studios this week. Our Second Years have been hard at work making sections of totem poles as part of a group project. Take a look at the video below to get a flavour of what they’ve been creating:

The 2021 Creative Writing Awards finalists have been announced, after some fantastic pieces were submitted from Second Years across every Form. Many congratulations to Avi B, Ben R, Eashan A, Falak SK, Jason DW, Monty H, Oliver D and Sam T whose entries have been selected and sent to the competition judge, author Sara Grant, for review. The winners and runners-up will be announced at the beginning of next term and presented with book vouchers. All the finalists’ stories will be published in this summer’s edition of Lion Print, Hampton’s creative arts magazine. Brilliant work, boys!

Lots of you were looking forward to doing practicals back in the science labs, thank you to Avi (2J) for sending in this report from Physics.

This week in Physics 2H have been learning how particles move in fluids. We did a very interesting practical using smoke and a microscope, which allowed us to see individual smoke particles moving because of air molecules hitting the particles. This is called Brownian motion.

The return of school at Hampton also meant the return of sports, with Second Year returning to their normal sports periods on Monday afternoon. For the football A’s and B’s, it was an immediate return to action, and it was similar for the rest of the teams. Following a short warmup, the two top teams immediately split into four teams to play a quick round robin tournament, 7-aside with 10-minute halves. The session was intended for all members of the two teams just to return to playing team football, and to gain crucial match sharpness and fitness for when fixtures are hoped to return, just after the Easter holidays.

A message from the Director of Music, Mr Roland:

The Music Department will be running lots of year group bubble clubs, ensembles and choirs over the next few weeks! Please come over to the Garrick or speak to your music teacher to find out more. Most of the activities will run at the same time as last term. Clubs include rock bands, jazz bands, electronic dance music, orchestras, choirs, brass groups and more!

We hope to see many of you over in the Garrick soon!

From Monday 15 March, we will be resuming our collections in support of Feltham Food Bank who are supporting families in Bedfont, Hanworth, Feltham and surrounding areas during these challenging times.

Thanks to the generosity of our School community, we collected more than 150 crates of food and toiletries last year. A fantastic contribution! So, have a look in your cupboards, add something to your shopping list and try and do your bit to help.

The Food Bank would be grateful for the following items:

Thank you in advance for your kind and generous support which is very much appreciated!

2) What is Shakespeare’s shortest play called?

3) True or false: Shakespeare was also a well-respected business man.

Last week’s picture was: a very close up picture of some pixels on a screen

What is this a picture of? 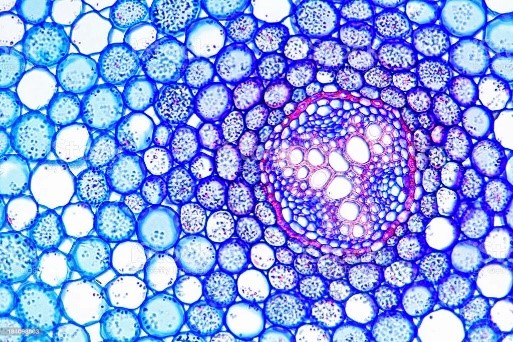