The Lion Returns, In the Classroom and Speedcubing!

The Lion Returns, In the Classroom and Speedcubing!

It has been another great week for our Second Years, with a number of clubs and sports practises starting back up during lunchtimes. Thank you to our team of Media Reps for their contributions to the blog this week!

After five unusual months of e-Hampton, School returns a safer and more alert community. Meeting face-to-face once again has been a refreshing experience for friends, pupils and teachers alike. Hamptonians can finally utilise the incredible facilities and clubs on offer.

The School itself has undergone some substantial changes. Face masks have become like school uniform and must be worn when in contact with different year groups. In order to prevent contact between different year groups, classes for non-specialised subjects are now conducted in form rooms – we no longer move around the School. We are required to sanitise our desks after every lesson and staircases are now strictly ‘one-way’.

Boys were happy to be able to play their favourite sports again. Football and rugby continue to be popular as the main sports – many of us wait in anticipation as the coaches decide the teams! The Hampton cricketers were very pleased to know that, to replace last Summer’s season, cricket would be played this Autumn. Select clubs have also started returning – a two-week rota has been introduced. Clubs are now done in year groups to prevent contact with different year groups. Current clubs on offer include: Badminton, Volleyball, Basketball, Table Tennis and Psychology. We wait eagerly for more clubs to return.

In conclusion, despite the many inconveniences, it is inspiriting to once again meet face to face. It rekindles our sense of society and refills the community with renewed alacrity…

This week Elliot (2H) reports on what has been happening in Physics!

On Wednesday, 2H measured the speed of sound. To do this, firstly, we stood 88 metres away from the side of the LEH Sports Hall. We then made a loud clapping noise and measured the time it took from us seeing the noise being made to us hearing the echo coming off the LEH Sports Hall. We repeated this until we had five measurements so that we could calculate an average. The calculation that we then used to figure out the speed of sound was:

Distance (in metres), times two, divided by the average time recorded = the speed of sound in metres per second 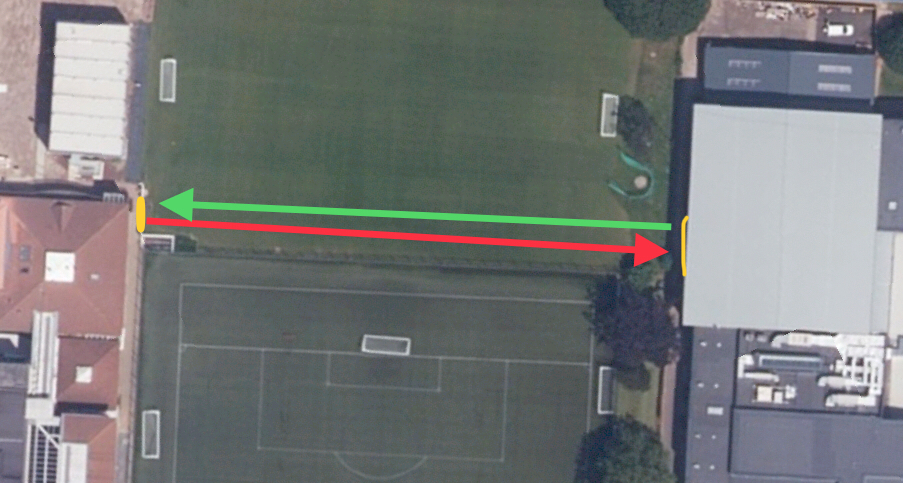 This week in DT we have begun creating our little metal figures for our own personal trophies. Mine was someone getting ready to hit a ball in tennis. We cut out the figurine using the metal cutter, folded to get a basic human with two arms and legs. We had a separate circular bolt for the head. We also filed off some of the metal so that the edges were smooth and we couldn’t accidentally cause an injury! The homework was to build the action with a cardboard figure, so I am going to fold the cardboard to look like a tennis player.

We always like to report on some of the amazing and varied skills, hobbies and interests of our Second Years; this week Patrick (2H), who competed at last year’s Rubik’s cube championships, shares his enthusiasm for Speedcubing!

Speedcubing is an increasingly more popular sport including many different puzzles and events, including one handed solving and solving large cubes blindfolded! Personally, at home I average 14 seconds for the regular rubiks cube. Us “cubers” solve puzzles using a set of moves or “algorithms” to move around certain pieces without disrupting others. In order to get faster, we learn more advanced algorithms to shorten the length of the solves, or we focus on turns per second (TPS). I personally have been cubing for almost three years and enjoy challenging myself by solving cubes blindfolded. We do this by memorizing the position of the pieces and move around only three at a time, in order to keep track of the pieces. Watch one of my solves here:

The A’s and B’s once again had training on Saturday, the first time the new additions from the C team had a full training session with the squads. It was back to the same as the end of last year, with the only initial changes being replacements for players who had switched sport, and the addition of a small batch of players for the B team. However, the squads are not set in stone, and there are a few training sessions remaining for everyone to try to earn a promotion to a higher team, leaving both the A’s and the B’s with little room for error. Eddie (2J)

So far, the D and the C team football training has been very fun, with training announced on Saturday 9-10 AM. Fixtures will start sometime in October. Unlike last year, the C and the D team have been training together, so that the coaches can see which players should get moved up, so that everyone is in the right team. Lunchtime training is going to be introduced soon, and it will be great to get to play more football. Overall, I think it’s been great to get back to football training and it will be great to eventually have some fixtures. Ewan (2J)

The Second Year football E Team trains on the 3G by themselves. We do a lot of running for the warmup around the 3G and we play some training matches. The U13E Team is split up roughly equally into two groups with similar skilled players. We play one big game, with plenty of rests in between. There are players constantly moving up. It is exciting to see them leave for a higher team and at the same time, it motivates everyone to follow. As a goalkeeper, I aim to sharpen my skills and to perform better. Oli (2J)

Cricket life at Hampton has been largely perturbed by the COVID situation at hand. During the summer term at Hampton many boys would usually be playing fixtures for the school however online school blocked out the opportunities for this. However, the great variety of teaching staff and sports staff have managed to give us a chance to start playing some cricket. Some fixtures have already started happening, we’ve just played a great U13 fixture against RGS Guildford. Viren (2L)

On Saturday 12 September the U13A cricket team had a match against RGS Guildford. We batted first and put 176 on the board with quite a few good innings from my teammates. We bowled very well and nearly everybody who bowled took a wicket. The game finished around 20 minutes early because we bowled them all out in 15 overs. They put up a good stand and they made 136. Congratulations to the team for a great team effort and performance. Adi (2L)

Last week’s theme was ‘buildings’ and the winning entry came from Edward (2L). 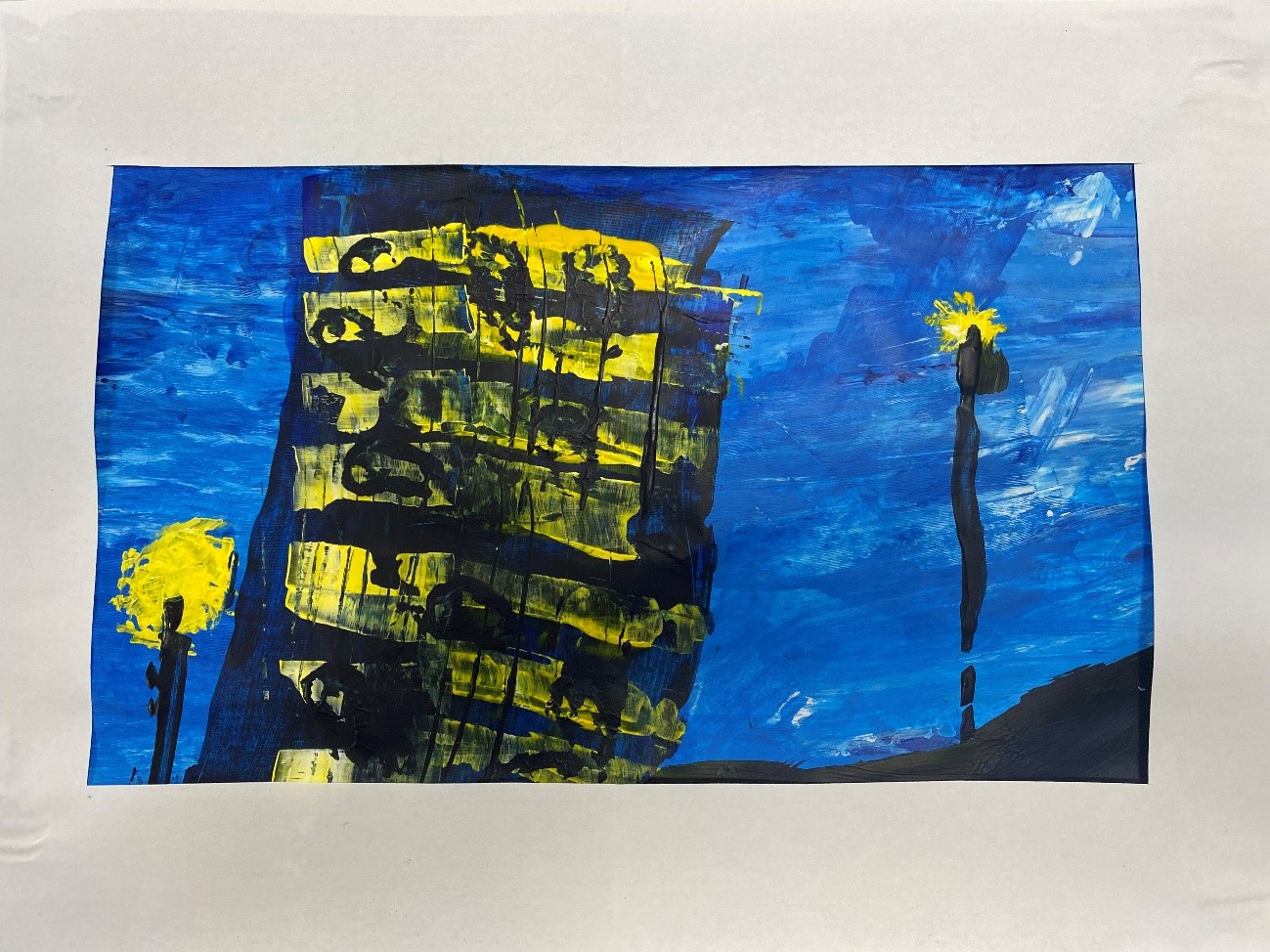 This week’s theme is ‘The Ocean’. You can use any medium you wish, simply take a picture of your artwork and send it to r.kugele@hamptonschool.org.uk , alongside some text explaining how you created it.

There is a return to full School uniform on Monday, a reminder of what this entails is below!

All boys are required to wear clean and tidy clothing as listed below:

If worn, pullovers should be black with a V-neck and without a logo. (Sweatshirts or cardigans are not allowed.) Boys must not wear hairstyles deemed by the School to be extreme; facial hair and jewellery are not permitted (unless for religious reasons). Hair must not be dyed.