The Third Years started the week by hearing a talk from two Upper Sixth Form pupils in the Hammond Theatre during Form Time on Monday morning. The Hamptonians spoke about personal safety in public and how to deal with issues surrounding mugging crimes. On Thursday the Third Years continued their PSHE topic on Sex and Relationship Education.

Well done to all those Third Year boys involved in the latest MUN conference. Mr Agulian reports on their recent conference:

The MUN arena keeps going from strength to strength – another weekend and another successful MUN conference took place…this time at Magdalen College School in Oxford. Well done to all those involved.

Well done to our Third Year rugby players who were great ambassadors for the School. Here’s a message from Mr Keenan:

The Third Year boys hosted Selwyn House School from Montreal, who are currently on a rugby tour of England. The boys had lunch together and gave a tour of the School, where they shared their insights into life and rugby at Hampton before having a joint training session on the 3G. Teachers from Selwyn House remarked how welcoming and confident the Hampton boys were. They also noted that not one Hampton Boy dropped out or complained during the freezing rain in the rugby session! Many thanks to Third Year rugby boys for being such a credit to the School.

This report comes from Sagar N. Here’s what he had to say:

On Thursday, the 27 February, about 20 Third to Fifth Year Hamptonians attended an after school performance of the KCL Greek Play 2020; a unique mashup of the famous Grecian plays Frogs and Bacchii. These two very different and unique plays had their common themes merged to create an entirely new and very convincing story, adapted to reflect important parts of modern life and culture.

The play thus managed to tackle issues such as climate change in an effective (but importantly, non-disruptive) manner.

After marching out of School at 4pm we took the 4:51 train from Hampton Station to Waterloo (on which we wolfed down our food), from there we took the tube to Southwark to arrive at the theatre around 6pm.

The Play was performed by a group of students from King’s College London at the Greenwood Theatre and was preceded by interesting lectures from both Professors of Classics and experts on climate change – although we only arrived for the final lecture providing context of Athens in 405 BCE.

I am sure that all Hamptonians who came on this trip would agree that it was an excellent, informative and well-given speech. These plays have been renowned for nearly 70 years due to their defining characteristic of being partly in the original language, Ancient Greek (with subtitles above the stage presented in an easy-to-read and comedic manner) and therefore are able to retain extreme closeness to their source material, the famous literature which they have been based on.

The actual play itself provided many laughs and serious moments for the audience. Many types of ‘friendly’ humour were involved and yet when it came to it, I felt that the play really managed to focus on what was happening by encapsulating the audience within the diegetic events that took place. It covered a huge spectrum of ideas and the cast evidently put a lot of time and effort into production and staying in character; moreover, I feel that the professional direction of the play allowed character roles to be balanced in terms of the time spent acting and therefore the protagonists were not forced into astronomical levels of effort while other members did remarkably little.

Everyone spent a lot of time in character but on the occasions of audience involvement they still stayed true to exactly what was being portrayed and never lost themselves, even when they had to multitask a lot – meaning that overall, it was an amazing experience and I would definitely present it with a five-star rating for the extreme dedication to keeping the Classical elements finely preserved. I would 100% visit it again if presented with the opportunity.”

Third Years pupils are now welcome to use the fitness suite, during lunchtimes.

They must be in full sports kit (does not have to be PE/Games kit).

This Friday is the much anticipated Jazz Café in the Main Hall at 7.30pm. All dining tickets have now been sold, but there are still balcony tickets available for the bargain price of £5! This is one of the musical highlights of the year and should conclude at around 10pm. There is a cash bar run by the Music Society with all profits benefitting Music at Hampton!

You are warmly invited to our Spring Concert, which takes place on 19 March at 7.00pm in the Hammond Theatre. We will be joined by our partner orchestra from Konstanz so it should be a very special occasion! The ensembles included are Brass Band, Sinfonia, Concert Orchestra, Symphony Orchestra (along with Konstanz Orchestra).

Our School Captains are celebrating Hampton’s unsung heroes. Those staff who work tirelessly, often behind the scenes, helping to make Hampton a great place to come to school. Have a look at what Mr Hunt, one of our Groundsmen, does every day to make sure that our sports pitches look so fantastic.

On Monday 2nd march, the U16A Table Tennis team played against Coombe Boys’ School in an away league fixture match. The team consisted of third years Vishal S, Ed GZ as well as Henry F and Rohan R. The first round of single matches, were mostly dominated by Hampton – except for Ed and Henry who were unlucky to lose some of their matches. Next up, it was time for the doubles matches – Ed and Vishal played together, while Rohan and Henry were the other doubles pair. Hampton played very well and we won both matches.

In the end, Hampton was victorious and won 7-3 overall against Coombe Boys’, everybody displaying some impressive rallies. A special thanks goes to Mr Bolton, who helped with this fixture.

The U14As comfortably saw off St Paul’s College in an exciting game that contained a brace from Paddy H and ended as a 4-1 win for Hampton. Josh H tells us more:

After a long half term and a few weeks without a game, the U14As were back at it, after the break, playing on the 3G pitch at St Paul’s School. A slow start caused the away side to fall behind in the opening minutes, but only in terms of possession. Once a few duels had been won and passes strung together, things started to pick up.

A free kick was won by Hampton to the right side of the penalty area and was whipped in accurately by Zain S. The cross was met equally well by Paddy H who leapt up and headed the ball into the far, top left corner of the goal to claim his first of the match. Minutes later, a similar situation followed but for the home team. However, after a brilliant headed clearance by Toby N, Ben W picked up the ball and played it on to Zain, who took a brilliant touch and put Jamie W through on goal. Although in the clear, he still had a long way to run and held off a St Paul’s defender from inside his own half to stride into the box and smash the ball into the far corner of the net.

Despite this, just before the stroke of half time, a long ball from St Paul’s caught the Hampton defence unaware, and an opposition winger found himself with a free chance on goal before he calmly opened up his body and finished the ball into the bottom right corner. However, in spite of the minor blip prior to half time, the strong performance continued after the break as good passing play meant that space opened up for Jamie, who skipped into the box before being brought down and awarded a penalty. Obrad K stepped up and placed the ball into the bottom right corner, passed the keeper who stood still to watch it fly into the net.

Finally, to cap the game off, after some encouraging play down the left hand side, Aaron M crossed the ball only to be met by the outstretched boot of Paddy once again. However, this time his feet were swept away from underneath him by the flailing leg of the defender and another penalty was given. Paddy gave the keeper the eyes and sent him the wrong way, similarly placing it deep into the bottom right corner.

Minutes later, the final whistle blew and the Hampton players and coaches were happy with the display, having had a week off since their last match.

Hampton School supports four charity partners each year, all chosen the pupils. Before the Easter holidays, we’ll be running a Movie Lunchtime, as chosen by you! So have a think, click on the link and bring along your £1! 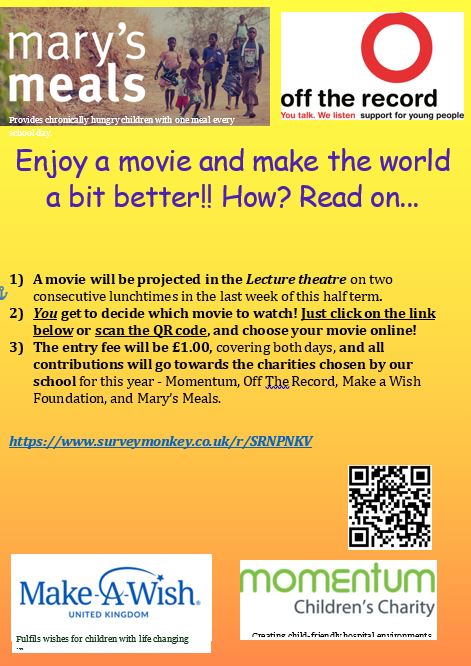