Well done to the following boys who have reached their next merit milestone:

Keep them rolling in.

This week it is the turn of 2J who are profiling Mr Draganov. Thanks to all involved and particularly to Max C (2J) for editing it and sending it in. I know you had to cut it down but I’m glad you didn’t chop the karate questions.

What urged you to become a teacher?

I had a strong passion for Chemistry and I had taught Maths and English in another school and really enjoyed the interaction with the pupils.

Was teaching your first choice?

Yes, as I had done my university course for Chemistry at Imperial College London and then progressed onto a teaching course for 4 years and my first job is here. 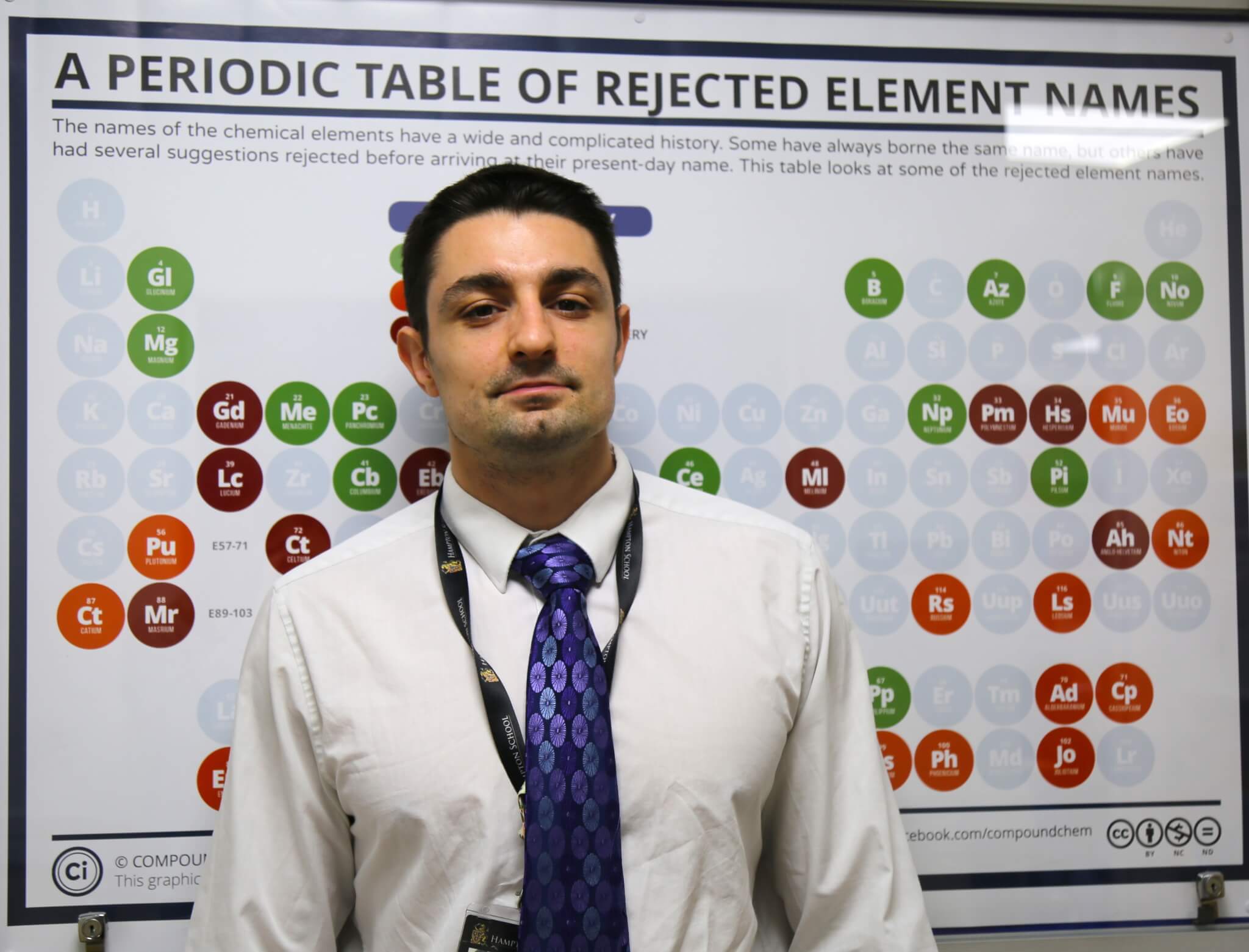 Have any other professions appealed to you if you finish teaching?

I am interested in starting my own business and then teaching karate to younger kids.

How did you get into karate?

From the age of 10 my parents signed me up in the hope that I could do well and I never stopped training since to get where I am today.

Do you still enter competitions and train?

Yes, I frequently enter competitions when I can and I train a lot but am interested in teaching karate when I finish teaching.

How far from the top level of black belt are you?

I am at 3rd dan, the levels of karate are called dans, out of 10 but it doesn’t really matter when you compete as there could be someone lower than you and they beat you and vice versa.

What is your favourite part of Chemistry?

I love organic Chemistry; it is to do with hydrocarbons and alkanes which you learn about next year.

What is your favourite part of teaching?

Watching pupils develop and especially Sixth Formers but you do get sick of them after a while! (Joke!)

Thank you for your time and that will be all.

If you haven’t already, please do interview your tutor and send it to me. You could feature next week.

It’s always great to hear what you’ve been up to outside school. Here is a very entertaining report from Finn W (2J) about what he got up to over the break:

On Saturday 16 February, I went down to ExCeL London with a friend to attend the convention named ‘VidCon’. This convention is about the internet, and more specifically social media stars. The trip was fairly long (and boring), apart from when I discovered an underground KFC and a perfect box shaped McDonald’s (I know, very interesting). When we arrived at the venue, skipping the whole parking experience, we walked along the main long corridor of ExCeL, with lots of food stands and, of course, vintage car shows. When we got to the VidCon hall, we had to get our security bracelets, and lanyards, but when we walked in the main hall, we recognised some booths of famous Internet personalities. We went around to each booth and checked the place out. We then went to a theatre, where the internet duo ‘Rhett and Link’ were doing a Q&A panel, with funny jokes and other shenanigans. My friend and I then went to a booth with retro video games, so naturally we played Dance Dance Revolution, the game where you have to dance for more points. We thought it was a good idea, but we probably looked idiotic, flailing our arms and legs around. The rest of the day was filled with merchandise buying, booth checking-out, and show-watching, until I saw a long queue for one stall. The stall was for the YouTuber ‘TomSka’, who has around 5.7 million followers on YouTube, and the person who made animations that made most of my jokes years ago. My friend went to the front of the line, and reported to me that the man himself was at the front, signing shirts, taking selfies, autographs, the usual. I thought it would be a terrible idea to wait half an hour in a line for a signed shirt and selfies. So I waited half an hour in a line for a signed shirt and selfies. I got to the front, and I was greeted, had rapid fire selfies taken, and bought a shirt for him to sign (from my form’s favourite song, ‘The Muffin Song’). We got burritos, then we went home, realising we had gone through the whole expo hall. All in all, it was a great day, and I can immortalise it in a shirt with a cartoon muffin on it.

Obviously I’m far too old to understand most of this but I was treated to a rendition of ‘The Muffin Song’ by 2J this week and it is … quite something.

The table tennis team wasted no time bouncing back into action after the half term break. Ed GZ (2L) reports:

On Tuesday 25th February, our U13A and U16A Table Tennis teams competed against Wallington Grammar School. The under 16’s drew overall, however their under 13’s are a particularly strong team so we unfortunately lost. It was a good experience for everyone though and we thoroughly enjoyed it.

Now, this Monday saw one of the most hotly anticipated days in the Second Year calendar with both the Rugby and Football Inter Form Competitions taking place in glorious sunshine. Let’s hear about football first from Daniel E (2J):

On Monday the Inter Form event of rugby and football took place. I’m going to talk about football. The first game of our group (2J, 2H and 2B) was 2H vs 2B. 2H won the game 2-1. The next game was 2J vs 2B. Two goals from Jago D (2J) and Joe F (2J) plus another goal from Jamie W (2J) led 2J to a 5-1 win. The next game was 2J vs 2H. For first place, 2J only needed a draw due to goal difference. The game ended up in a 1-1 draw, with Jamie W (2J) scoring the first goal, then 2H equalised with a goal from Alpha B (2H). In the last attack of the game, it looked like 2H would score but an excellent save from Matthew B (2J) prevented that. Then came the final. It was to be 2J vs 2W. A opening goal from Jamie W (2J) put 2J in the lead but an equaliser from Josh H (2W) meant that it went down to penalties. Jamie W (2J) took first and a strong hand from Conrad K (2W) saved the penalty. Then Toby N (2W) took the penalty and scored. 2W were crowned Inter Form football champions but 2J would have a chance to get their revenge in the rugby competition.

Congratulations to the mighty 2W! Probably a good thing that you ignored my managerial suggestion that Conrad K (2W) should play for the rugby team. Let’s hear from Josh F (2J) about whether 2J could indeed get their revenge in that competition.

The Second Year have recently had an exciting, tense and thrilling Rugby Inter Form Tournament and with six forms competing it was quite a struggle to come out first. The event started off with two pools – 2J, 2B and 2H on one side and 2W, 2L and 2P on the other. In the first games, 2B declared a 7-2 victory over 2H and 2W put down a stunning 8 points to nil against 2L. In the second game 2B were less fortunate and were defeated 6-1 by 2J, and, on the other pitch, 2P had a tight match with 2L, managing a 4-4 draw. In the final pool games, 2J managed to beat 2H 6-2 with an exceptionally good try from Tom W (2J) guaranteeing them a place in the finals, but who would they face? 2W and 2P battled it out but in the end 2W progressed with a 6-2 win. In the fifth and third place play offs, all teams played well, but in the end it was 2H who came fifth, beating 2L 5-2 And 2P drew with 2B. With most games played, pressure was mounting up for the finals – 2J vs 2W, it was a tight game with a strong performance from captains Max C (2J) and Finley W (2W) in particular but in the end, 2J managed to come out top, celebrating a 4-2 victory and being crowned champions for the second year running. Everyone played especially well but a special mention to those who came over to play rugby who knew very little, or nothing, about the sport.

Well done indeed. One of the great things about the competition is seeing every single pupil taking part. Those events score points for the overall Inter Form Competition with the final winners being crowned at the swimming gala in July. Will it be Mr Malston’s form for the third year in a row? Either way, you can expect utterly impartial coverage in this blog. There are plenty of points still to play for over the coming months.

Well done to Finlay F (2H) and Ishaan D (2B) and others who worked out that last edition’s trivia answer was The Grapes of Wrath. Maybe you will be coming in next Thursday dressed as Tom Joad for Character Day. If not, get thinking about who you would like to be and what your costume will look like.

One more book title to identify this week:

I don’t think you need a clue…

Henry H (2P) claims the honour this week with this effort: