It’s been another busy week for Third Years, here’s what we’ve been up to…

Third Years had a double PSHE session this week on Monday and Thursday – we continued working through our “Sex and Relationships Education” programme. The Third Years had their immunisations on Thursday- well done on getting through these chaps!

Well done to Ollie L and Luke T for their engaging and interesting talks on their HELP Projects in assembly on Monday morning! 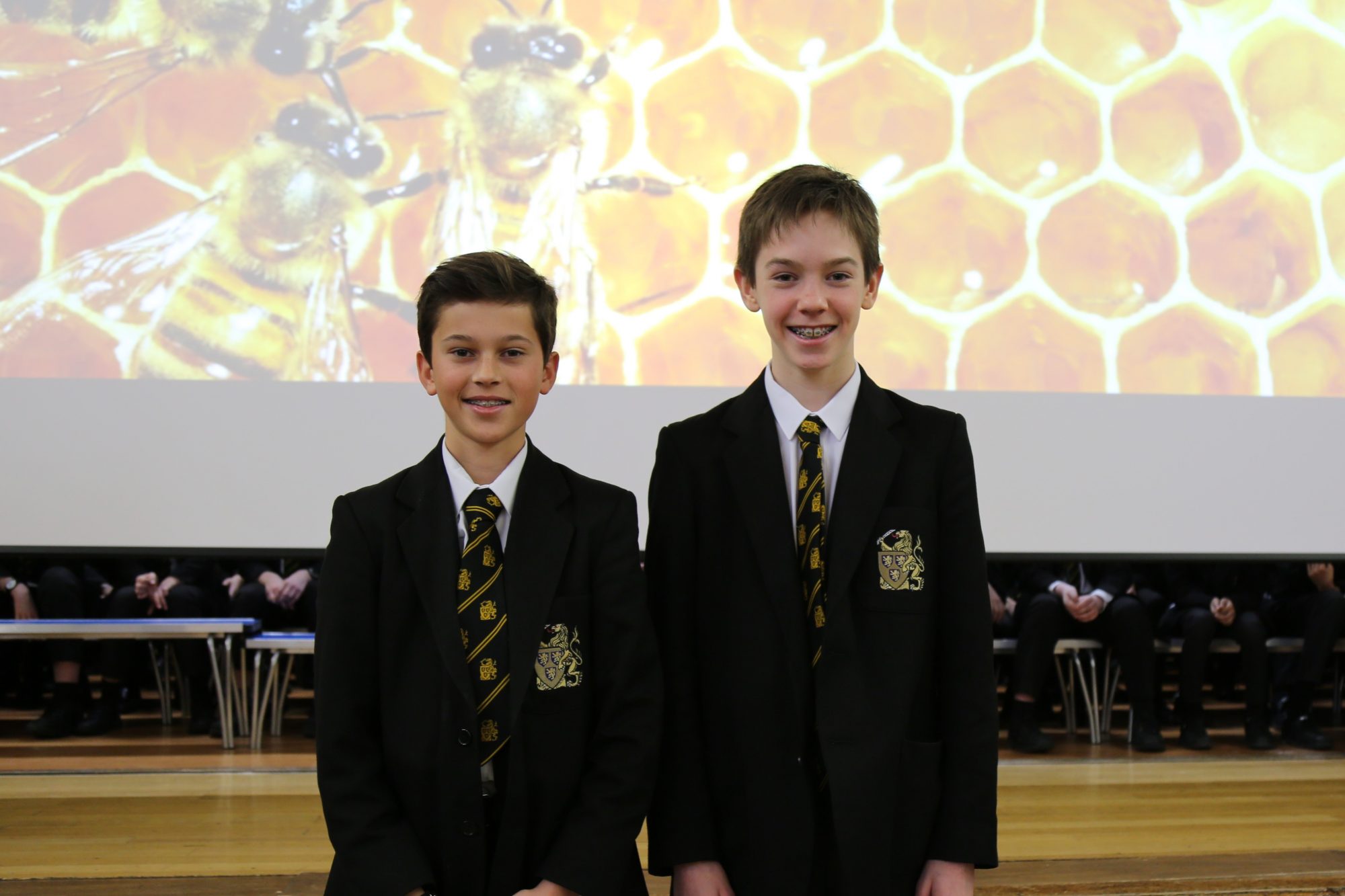 Congratulation to our Third Year fencers. Osborn Z and Jacob C both competed in the Public School’s Fencing Championships at Crystal Palace Sports Centre this week.

Osborn fenced in the Mount-Haes Epée category on Tuesday and reached the last 8 out of 72 fencers and eventually finished sixth. This is an excellent achievement.

Jacob fenced on Wednesday in the Mount-Haes Foil category and reached the last 16 out of 55 fencers, which again is a great achievement.

Well done to the following Third Year musicians who took part in the ISSP music day on Thursday:

Well done to the following boys for competing in the Hampton team at the Annual Literary Quiz at Tiffin School on Thursday:

Congratulations to the following Third Year boys for being selected to take part in the Annual Creative Writing Masterclass on Thursday 21 March. The finalists will be working with visiting author Sara Grant to develop their stories, which will be published in this summer’s edition of Lion Print magazine.

In an exciting fourth round, Don’t worry we have time for Tom Curry amassed the greatest number

of points with his well-chosen team: 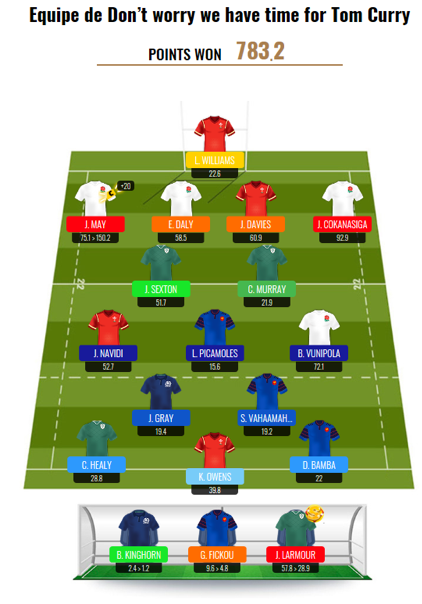 This means he is also in the overall lead: 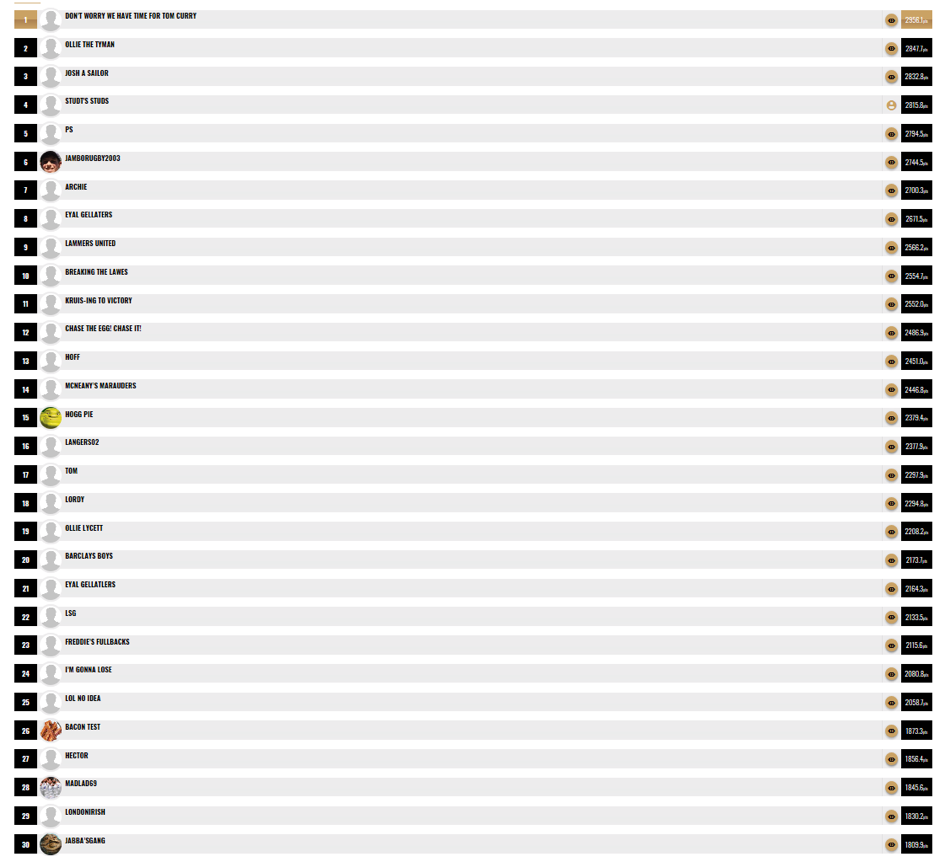 Will he be able to hold on for another round?

We left Hampton very early but in high spirits. Our success the previous weekend at Wellington gave us confidence in our ability. First match was against Finborough, a new opposition for us, then Solihull – a very strong side we’d lost to in the past. Unfortunately, we had disappointing losses in both games. The Solihull match we should have won. The last group game- finally a win against Wimbledon College. This win secured us third position in the group. Knowing we could have done better we were determined to win the Plate. We progressed through the semi-final with a win and met the hosts, Warwick, in the final. We had already played them this season at 15s and had suffered a close loss. The match was close with the score 21-19 to Hampton. Smiles on faces as we headed back down the M40. James M our player of the tournament with his strong running and great ball handling.

Arriving at John Fisher’s ground, after a torturous drive through rush hour traffic, there was no time for a decent warm up, as we were in the first match. We had a comfortable win over City of London Freemans (31-5).  Followed up by a 17-5 win over Glyn. Then a 33-7 win against Claremont Fan Court. Epsom next- we battled again but lost 21-10. We progressed through as second in our group to meet KCS Wimbledon, who had qualified as the top seeds in the entire competition. Battle-hardened from our game against Epsom, we played some excellent Rugby to win 14-7, which sent us through to the top half of the Cup competition along with Wimbledon College and Whitgift. Tired or overly confident from our win against them the previous weekend meant we did not play the style of rugby we’d been coached to play or had been playing – we lost 21-14. We then watched Wimbledon College play Whitgift and lose considerably. We were disappointed with how we played against Wimbledon College but Mr Hardman praised us with the fact we could say we’re the third best 7s team in the county.  Strong running by Charlie U and Josh A along with the great defensive work by the team secured us this position.

Finally a short commute to a 7s tournament, though we got dropped off a mile away from the playing fields!  Mr Beattie marched us along the pavements of Richmond, this was a new style of warm up. It was quickly apparent we had a very different level of opposition compared to Tuesday’s tournament. Our first three matches (against Radnor, Grey Court, and ACS) we comfortably won keeping a clean sheet, then we played Tiffin which we also won, but annoyingly we let them score 2 tries. In the semis we met the hosts, Ibstock- we beat them comfortably and then the final. Gunnersbury is a strong rugby side with big and fast runners in the team. We knew from the outset of the tournament they would be the team to beat. Perhaps Tiffin had tired them out in their semi-final match or more likely the wise words of coaching from Mr Thomson stuck – we played a blinder. We were composed and stuck to the game plan we’d been coached. Four tries scored against them secured our win of the tournament. Throughout the whole tournament we only conceded 3 tries. Great defensive work by the team and strong running. It was great to have Gus C back in the team. Nico L and Thomas C deserve a mention – in fact the whole team should be proud of the way we implemented our game plan.

After a long break since our previous match before half term, the U14c team were eager and ready to face their next opponents; KCS. The game kicked off, and due to high pressure on their defence, Lucas managed to grab an early goal. We managed to maintain this streak, making pinpoint passes that dissected the defence, and as a result a goal came from Kyan to double the lead. Play continued, with KCS improving throughout, making it harder for us to lengthen our lead once more, however; a long shot from Tom S saw the ball whip into the far bottom corner. Half time came round, and the score was 3 – 0 Hampton. The second half saw a more even battle, with some fantastic acrobatic saves from Will to keep a clean sheet, after a dramatic ending with the opponent scrapping to get a goal back, the shoreline remained the same, 3 – 0 Hampton.

Little movement in the Wills’ Cup Table apart from 3J overtaking 3B – congrats to 3G for retaining their lead!